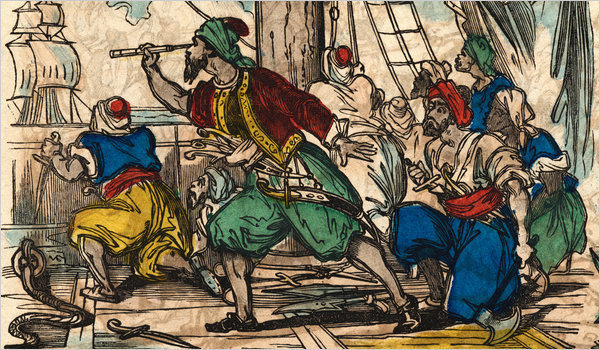 The Muslims of Early America By PETER MANSEAU FEB. 9, 2015

… Moreover, there is an inconvenient footnote to the assertion that Islam is anti-American: Muslims arrived here before the founding of the United States — not just a few, but thousands.

They have been largely overlooked because they were not free to practice their faith. They were not free themselves and so they were for the most part unable to leave records of their beliefs. They left just enough to confirm that Islam in America is not an immigrant religion lately making itself known, but a tradition with deep roots here, despite being among the most suppressed in the nation’s history.

In 1528, a Moroccan slave called Estevanico was shipwrecked along with a band of Spanish explorers near the future city of Galveston, Tex. …

The best known Muslim to pass through the port at New Orleans was Abdul-Rahman Ibrahim ibn Sori, a prince in his homeland whose plight drew wide attention. As one newspaper account noted, he had read the Bible and admired its precepts, but added, “His principal objections are that Christians do not follow them.”

… In a sense, Islam is as American as the rodeo.

Slavery is a very Muslim thing.

Thomas Jefferson sent the Marines to “the shores of Tripoli” to suppress Muslim slavers.

One of the more legendary unproduced screenplays of recent Hollywood history is “Tripoli” by William Monahan, who went on to win an Oscar for “The Departed.”

From the Wikipedia article on “Barbary Slave Trade:”

“The Barbary slave trade refers to the white slave markets that flourished on the Barbary Coast of North Africa, or modern-day Morocco, Algeria, Tunisia, and western Libya, between the 16th and 19th centuries. … The North African slave markets traded in European slaves. The European slaves were acquired by Barbary pirates in slave raids on ships and by raids on coastal towns from Italy to Spain, Portugal, France, England, the Netherlands, and as far afield as Iceland. Men, women, and children were captured, to such a devastating extent that vast numbers of sea coast towns were abandoned.

Professor Robert Davis describes the white slave trade as minimized by most modern historians in his book “Christian Slaves, Muslim Masters: White Slavery in the Mediterranean, the Barbary Coast and Italy, 1500-1800" … . Davis estimates that 1 million to 1.25 million white Christian Europeans were enslaved in North Africa, from the beginning of the 16th century to the middle of the 18th, by slave traders from Tunis, Algiers, and Tripoli alone … and roughly 700 Americans were held captive in this region as slaves between 1785 and 1815. 16th- and 17th-century customs statistics suggest that Istanbul’s additional slave import from the Black Sea may have totaled around 2.5 million from 1450 to 1700. The markets declined after the loss of the Barbary Wars and finally ended in the 1830s, when the region was conquered by France.