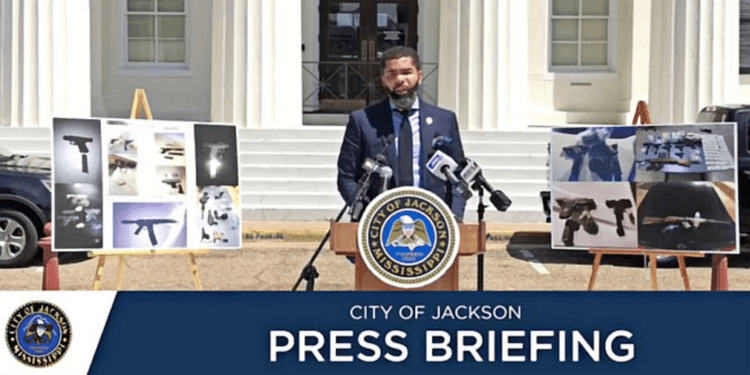 Because Too Many Black People Shoot Each Other In Nearly 90% Black Jackson, Mississippi, Black Mayor Suspends Open Carry During Coronavirus Lockdown

Jackson, Mississippi, the capital city of the state, is nearly 90 percent black. It is completely dominated by black elected/appointed officials. And though AMC/Regal Cinemas are closed nationwide due to the Coronavirus pandemic/shutdown, the city hasn’t had an open movie theater in decades, a reminder of the Visible Hand of Black Economics.

A Republican state lawmaker filed a lawsuit Tuesday challenging a Democratic mayor’s temporary ban on the open carry of guns in Mississippi’s capital city during part of the coronavirus pandemic.

Lumumba signed an executive order Saturday banning the open carry of guns in Jackson during the final days of his coronavirus stay-at-home order for the city. The stay-at-home order expires Thursday. Lumumba said in a video that two children in Jackson were killed within a week “due to senseless gun violence,” and Mississippi’s lax gun laws contributed to the problem.

“For too long, gun violence has plagued our city and disproportionately affected black and brown communities here in Jackson and nationwide,” said Lumumba, who is African American and leads a majority-black city.

Criswell, who is white and lives about 200 miles (322 kilometers) north of Jackson, does not mention race in the lawsuit. He is a licensed firearms dealer, according to the suit. Criswell said in a statement Tuesday: “The mayor’s attempt to disarm me and deny me the ability of self-defense puts me and my family in danger anytime we are in Jackson.”

Criswell is represented by the Mississippi Justice Institute, which is affiliated with a group that challenges many government regulations. Mississippi Attorney General Lynn Fitch, a Republican, said in a letter to Lumumba on Sunday that people may openly carry guns in all parts of the state.

The dispute over the Jackson gun order follows other court challenges over constitutional rights during the COVID-19 pandemic. U.S. Attorney General William Barr intervened this month on behalf of a church in Greenville, Mississippi, that sued over that city’s order that limited drive-in worship services. Greenville altered its order to allow such services if people keep their windows rolled up.

The state Health Department said Tuesday that Mississippi had at least 6,342 confirmed cases and 239 deaths from the coronavirus as of Monday evening. That was an increase of 248 cases and 10 deaths from the previous day. The state’s population is about 3 million.

The number of infections is thought to be far higher because many people have not been tested, and studies suggest people can be infected with the virus without feeling sick. For most people, the coronavirus causes mild or moderate symptoms, such as fever and cough. But for others, especially older adults and people with existing health problems, the highly contagious virus can cause severe symptoms and be fatal.

The Health Department said Tuesday at least 721 coronavirus cases had been confirmed at long-term care facilities such as nursing homes.

Mississippi is under a “safer at home” order issued by Republican Gov. Tate Reeves. It requires medically vulnerable people to remain at home and bans gatherings of 10 or more people. It also allows some businesses to reopen with limits on how many customers may be present, and it allows physicians to start offering some services that had been limited in recent weeks. Restaurants are still limited to carry-out or delivery.

Because too many black people (and brown) shoot each other in roughly 14 percent white Jackson, Mississippi, Second Amendment rights must be suspended during the Coronavirus lockdown.

Mississippi’s “lax gun laws” don’t contribute to the problem of black people shooting other black people in Jackson and across the state. The fault rests entirely in individual black people collectively being responsible for virtually all the gun violence in the state of Mississippi and capital city of Jackson.

But let’s blame white people and white gun owners. It’s so much easier.