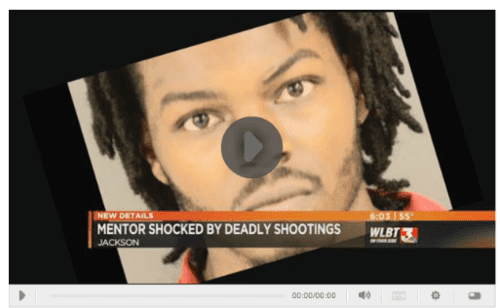 A civil engineering student at Jackson State University is accused of randomly shooting and killing two women in separate incidents Thursday night.
Zebulum Lael James, the black man (who his family claims is a Paranoid Schizophrenic) who killed two white women outside Jackson, Mississippi in "random" shootings. Was he affiliated with Black Lives Matter at Jackson State University?

Zebulum Lael James, 22, of Jackson has been charged with two counts of murder in the Thursday night shooting deaths of Suzanne Hogan, 48, a native of New York and a recent Madison resident, and Kristy Lynn Mitchell, 49, of Excelsior Springs, Missouri.

According to police, James went on a shooting spree through the metro Jackson area Thursday night, killing Hogan and Mitchell and injuring others. James is a suspect in two prior shooting incidents Thursday. No one was injured in those shootings.

James is accused of shooting Hogan in the head while she was in the Shell station parking lot on the corner of Watkins Drive and Beasley Road, according to Jackson Police Chief Lee Vance. Hogan was pronounced dead on scene.

Hogan was filling up at a gas station before driving home after leaving work that night.

Suzanne Hogan moved to Madison County nine months ago after being transferred to Entergy as a financial manager.

Minutes after shooting Hogan, James is accused of shooting Mitchell once in the abdomen in the Logan's Roadhouse parking lot in Ridgeland. Mitchell was transported to the University of Mississippi Medical Center where she underwent surgery but succumbed to her injuries. Before she died, Mitchell described the shooter as a black male with dreadlocks, driving a blue Mustang.

When the shooter fled the Logan's parking lot, he hit a 59-year-old man walking in front of the Drury Inn. The victim was transported to River Oaks Hospital where he was treated for a broken leg. He also described the vehicle as a blue Mustang, Neal said.

But it gets worse. [Excelsior Springs woman in Mississippi on business trip gunned down, KCTV5.com, 11-20-15]:

On Thursday night, she was walking from her hotel room at the Drury Inn in a Jackson suburb across the parking lot to a nearby chain steakhouse when authorities say a Jackson college student opened fire for no reason other than hate. With her dying breaths, Mitchell gave police vital information that led to the arrest of 22-year-old Zehulum James.

Authorities say he killed Mitchell and a New York woman who was pumping gas during a two-county shooting spree. He allegedly struck a victim with his car. His victims were apparently chosen at random.

Mitchell's family is now grappling with their sudden loss.

On her Facebook page, Mitchell proudly shared pictures of her family including candid shots of her four grandchildren. She and her husband were married 31 years and had two children.

Mitchell worked the security entrance to the Excelsior Springs Job Corps. Her employer is now helping pay to bring her body back home.

Mitchell was remembered Friday as a tenacious and selfless woman.

"She would do absolutely anything and everything for her grandchildren," Jenna Robinson said about her friend. "Her tenacity and and just her joyfulness was overwhelming and it was contagious. You could have the worst day and she would give me, them big old hugs."

"If you were having a bad day, that's the woman you wanted there," he said.

He said the family hopes they see justice, and his aunt's killer "never walks the streets again." He knows his aunt would have pushed her family to forgive her killer.

"I guarantee she would have forgiven him immediately. I'm telling you she was full of love. She doesn't know the word hate," he said.

"I guarantee she would have forgiven him immediately. I'm telling you she was full of love. She doesn't know the word hate..." Your aunt was murdered for being white, Mr. Mitchell. It was hatred that killed her, fueled intensely by the national media, Hollywood, academia and the Obama Administration.

Zehulum Lael James didn't care that she didn't know the word "hate," because he certainly did when he targeted your aunt and another white woman for execution.

The question must be asked: Was he affiliated with Black Lives Matter at Jackson State University?

We continue to learn more about 22- year-old Zebulum James and the people who know him the best. Former Canton Assistant Police Chief Juan Cloy said he was a mentor to James for years. We talked to him about James and the possibility of his alleged actions being a hate crime.

Juan Cloy said, "Because we know the young man we knew something was not right. This is not the Zebulum we've been knowing all these years."

As breaking news alerts started surfacing, former Canton Assistant Police Chief Juan Cloy said he was in disbelief when James was identified as the suspect in the recent metro area deadly crime spree.

Cloy said, "I saw there were these violent acts occurring across the city and I wondered who was doing this and why. When I learned who it was our whole family was in shock."

Cloy said he has known James since he was in middle school. He said this is not the teen he has mentored throughout the years.

Cloy said, "He was a very smart young man. He actually tutored my daughter in math and I was somewhat of a mentor to him. He loved fitness."

The question has been posed, because James is a black man and police believe he shot and killed two white women, is this considered to be a hate crime? As a former law enforcer Cloy said everything is a possibility, but because James is accused of shooting in a home and at a Trajan bus in a predominately black neighborhood where other race and genders were present, it is highly unlikely a hate crime charge will come into play.

Cloy said, "The crime issues that are occurring in this city with our youth are major and we have to try and get to them before they start a life of crime."

Nothing to see except the future for all of America: where black criminality and black hatred of white people is not only excused by the state, but encouraged.

Post
Marijuana Use Is Way Up
MORE...
POPULAR TAGS