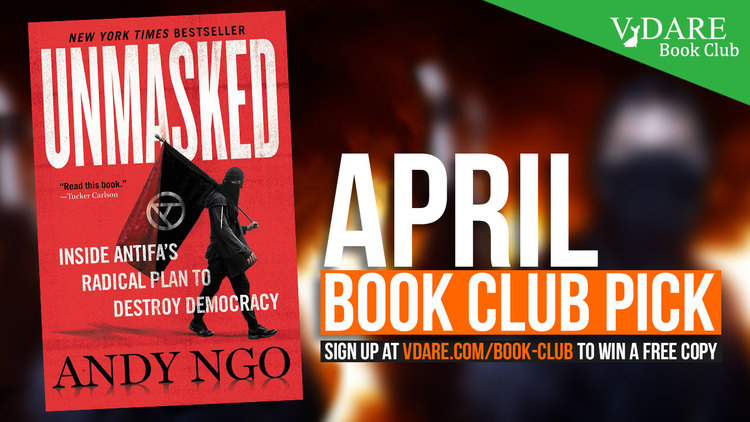 Announcing our April Book Club Pick: Andy Ngo’s Unmasked: Inside Antifa's Radical Plan to Destroy Democracy! Make sure you are signed up for the VDARE.com Book Club [here] by April 5th for the chance to win a copy!

Over the summer, we witnessed domestic terrorists known as Antifa rioting day after day across the country with no consequence. Despite our opinion at VDARE that the answer to rioting is ruthless coercion, the Trump Administration failed to enforce law and order and, as James Kirkpatrick predicted, lost the election [give or take fraud].

Worse, Biden’s pick for attorney general Merrick Garland refuses to acknowledge Antifa violence as domestic terrorism. And anyone who dares defend themselves against rioters will end up like the Proud Boys or Trump Supporters, denied bail and serving more prison time than actual murderers.

“Ngo shows that far from being just an 'idea,' as President Joe Biden would have us believe, Antifa comprises highly organized groups of dedicated activists with an extreme political agenda and a commitment to violence. But Ngo also shows, perhaps less consciously, that Antifa operates with de-facto backing from the Ruling Class, including Main Stream Media journalists, the principal enforcers of the current order. “

Ngo is a powerful voice against Antifa violence and, last June, launched an ongoing lawsuit against Rose City Antifa and others involved in assaulting him when he was attacked an independent journalist.

This April, we’ll be digging into Andy Ngo’s investigative work and accepting reader questions for our next podcast. We hope you’ll join us!