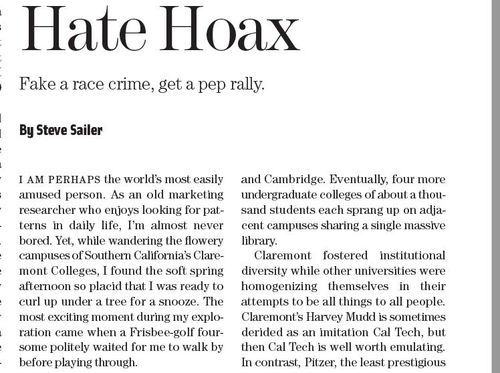 From The American Conservative:

Fake a race crime, get a pep rally.

I AM PERHAPS the world’s most easily amused person. As an old marketing researcher who enjoys looking for patterns in daily life, I’m almost never bored. Yet, while wandering the flowery campuses of Southern California’s Claremont Colleges, I found the soft spring afternoon so placid that I was ready to curl up under a tree for a snooze. The most exciting moment during my exploration came when a Frisbee-golf foursome politely waited for me to walk by before playing through.

Perhaps all this genteel serenity explains the psychodramas that a sizable fraction of the staff and students seem compelled to concoct for themselves. Just the month before, a long-festering mass hysteria over white racist student-thugs supposedly infesting the campus had culminated in a huge night rally in which thousands of blackshirted students had chanted their hatred of “hate,” while the administration stood by silently, despite knowing that there had been no hate crime, just a leftist professor’s hoax.

In 1887, New Englanders founded Pomona College, now ranked fourth among liberal-arts colleges in the country by U.S. News. With the population of the San Gabriel Valley’s posh orange grove belt booming in the 1920s, the trustees chose a clever way to expand. To preserve small-college intimacy while exploiting the economies of scale of the mid-sized university, they created a collegiate consortium modeled on Oxford and Cambridge. Eventually, four more undergraduate colleges of about a thousand students each sprang up on adjacent campuses sharing a single massive library.

Claremont fostered institutional diversity while other universities were homogenizing themselves in their attempts to be all things to all people. Claremont’s Harvey Mudd is sometimes derided as an imitation Caltech, but then Caltech is well worth emulating. In contrast, Pitzer, the least prestigious school, is a Sixties relic stressing social activism.

Opened in 1946, Claremont Men’s College taught economics and government from a conservative perspective, rare during that era of liberal dominance of intellectual life. Political philosopher Harry V. Jaffa, still energetic today in his mid-80s, made CMC a hub for his idealistic, Lincoln-lionizing interpretation of his mentor Leo Strauss’s theories.

In 1976, Claremont Men’s College went co-ed—although its neighbor Scripps remains all-female—changing its name in 1982 to Claremont McKenna College to keep its CMC initials. It is quite exclusive today, with an average SAT score around 1380.

In 1999, Pamela Gann became CMC’s first president who was a registered Democrat. She didn’t seem happy heading a college with a moderately conservative reputation and tried to use “diversity” to make CMC less diverse and more like every other college. Gann and the conservative professors fought bitter battles over affirmative-action hiring.

Gann’s frustration with her rightist holdovers seemed to feed into the growing paranoia at some of the other Claremont colleges, where the staffs nurture an obsession among their “diverse” students (i.e., everybody except non-Hispanic heterosexual gentile white males) to navel-gaze over whether or not they feel “comfortable with the climate.”

It was 72 degrees with a gentle breeze blowing, so the climate seemed okay to me, but a flier on Pitzer bulletin boards made the local idée fixe a little clearer: “Diversity and Campus Climate: You are invited to participate in a discussion about campus climate.”

Another advertised: “Queer Dreams and Nightmares: What is it like to be a student at the Claremont Colleges? Student panel discussion addressing the current climate at the 5-Cs, both academically and socially.” This was part of a conference entitled, with that profusion of punctuation that is the secret fraternity handshake of post-modern academics, “[Re]Defining a Queer Space at the Claremont Colleges.”

The university’s main concern appears to be to make students feel “comfortable,” a word that reappears constantly in Claremont publications despite the obvious hopelessness of the project. The only way to make 19-year-olds feel comfortable is to wait 30 years while they sag into their well-padded maturities. Right now, they are teenagers, and their surging hormones have far more important emotions for them to feel than comfort. Adults, however, who make careers out of encouraging kids to mold permanently self-pitying identities around their transient social discomforts, have much to answer for.

A series of semi-nonexistent “racial incidents,” such as liberal Scripps students advertising a racial sensitivity seminar with posters featuring the N-word, were parlayed by activists into a mood of dread. Kerri F. Dunn, a 39-year old academic prole, a visiting professor of social psychology at CMC whose contract was up in June, repeatedly harangued her students about the racists and sexists lurking in the shadows. On March 9, she gave a fiery speech at a campus event on “Hate Speech Versus Free Speech.” She then walked to her 1992 Honda Civic and returned some time later, claiming she had found it spray-painted with anti-black, anti-female, and anti-Semitic slurs. The Irish-American Dunn pointed the finger at her own students, arguing that only they had heard she was considering converting to Judaism: “How else would they believe I was Jewish unless they were in my class?”

Dunn’s allegation triggered a frenzy of fear and loathing.

Although faked hate crimes have become routine in the years since the Tawana Brawley hoax, the college presidents immediately canceled the next day’s classes (costing parents paying the full $37,000 per year list price for 150 days of education about $250 each, or close to $2 million in total at list price). At the mass rally the next night, Dunn announced to rapturous applause: “This was a well planned out act of terrorism. And I don’t believe for one second it was one person. I think that there’s a group here, a small group, but I do believe that there is a group here that perpetuates this in all different kinds of ways.”

Dunn’s image of a secret goon squad of marauding junior Straussians was as memorable as it was preposterous, but the administration had already been apprised of the unsurprising truth. Earlier that day, two eyewitnesses had told the Dean of Students that Professor Dunn had slashed her own tires. The FBI and local police quickly found inconsistencies in Dunn’s story. A week later, they announced publicly that Dunn had done it. (They also found that during her mid-30s, Dunn had been arrested three times, twice for shoplifting, once for driving with a fake license.)

University officials suspended Dunn, but with pay, and continued to rent her a replacement car. A suddenly indecisive Gann ruminated, “One has to learn to perhaps live with ambiguity here, and never know the answer and reach a closure because the likelihood of actual prosecution … is very small.” …

Actually, from the Los Angeles Times later that year:

A former psychology professor at Claremont McKenna College was sentenced Wednesday to a year in state prison for spray-painting her car with racist and anti-Semitic slurs and claiming that unknown vandals had done it.