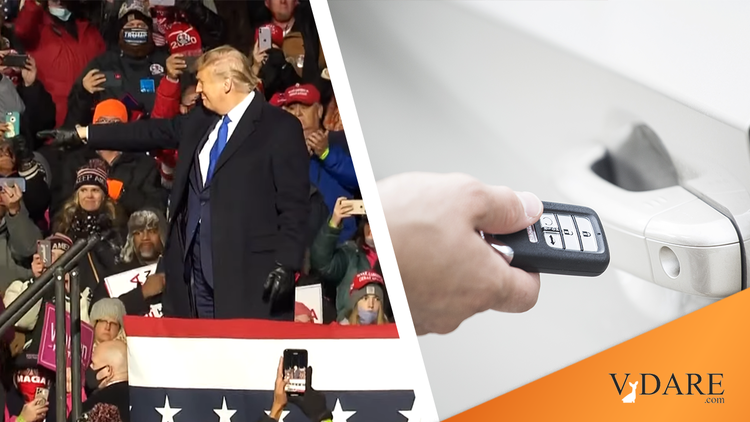 Allan Wall: I Went To The Trump Rally in Omaha And Wasn't "Stranded," I Just Walked Back To My Car

Donald Trump held a rally in Omaha, Nebraska on October 27. I was there, and it was a great experience.

A Trump rally is a combination of a rock concert, a stand up–comic act and religious revival. It's a community get-together, as you can meet and talk with other Trump supporters while waiting hours for Trump's appearance.

So I attended the Omaha Trump rally, along with my son and a friend of my sons, and it did not disappoint.

Click here for a transcript and video of the Omaha rally.

Here are some things Trump had to say about immigration.

After the 20:59 mark, after speaking about COVID-19 and the China travel ban, Trump said that

"Biden was willing to sacrifice your lives on the altar of open borders. He wants open borders. Without borders, you don’t have a country. By the way, the wall is now over 400 miles long and we’re building 10 miles a week and it’s very soon going to be finished. So we have the strongest southern border we’ve ever had."

"Under my leadership, we achieved the most secure border in US history, our Southern border, largely because of the wall. My opponent’s insane immigration plan would completely eliminate US borders. Open borders they want to have, let’s have open borders so everyone can just pour [in] like they used to. He would make every community into a sanctuary city for violent criminals."

It was a great rally, yet afterwards something occurred which attracted much attention from the Mainstream Media, and which the MSM folks were glad to publicize. It was the bus problem, wherein those of us who attended became unwitting pawns in a national media story.

The Washington Post reported it with this headline: Hundreds of Trump supporters stuck in the cold for hours when buses can’t reach Omaha rally, by Tim Elfrink, Brittany Shammas and Brent D. Griffiths, October 28, 2020.

The Twitter report was entitled Trump rally attendees stranded after listening to the president in Omaha.

The Daily Beast made an anti-Trump metaphor out of it:

"How’s this for an extremely heavy-handed real-life metaphor? Hundreds of President Donald Trump’s fans have reportedly been left stranded in the freezing cold after gathering together to offer him their unwavering support. CNN’s Jeff Zeleny reported that, over an hour after Trump left Nebraska on Air Force One following a rally at Eppley Airfield on Tuesday night, several hundred supporters were left by a roadside due to an insufficient number of buses to transport them."

Wow, who'd have thought that the MSM cares so much about Trump supporters?

And I got to be a small, nameless part of a national news story.

To begin with, the rally was held outside at an airfield, but parking was from two and a half to over three miles away, depending on which lot you parked in. So we were taken by bus to the rally site.

Nobody was actually abandoned, but it took several hours to transport everybody who wanted to be transported.

It shouldn't have turned out like that, of course. It could have been done much more efficiently in much less time.

And there were those who required medical attention. According to MedPage Today

At least seven people were hospitalized and 30 had to receive medical attention during and after a Tuesday evening [October 27] campaign rally with President Trump in Omaha, Nebraska. Thousands were left waiting for hours for transportation following the rally, according to reports. Many suffered from conditions triggered by cold temperatures, including several elderly people. Temperatures hovered near freezing, according to the U.S. Weather Service. A medic was called to care for a 68-year-old male reporting initially of "possible hypothermia and altered mental status. He is alert and oriented and shivering," according to a tweet by Omaha Scanner, a website that monitors first-responder radio communications. The Scanner also tweeted: "One officer advising 8 to 9 elderly people who are struggling. Separate officer advising they have located an elderly party who is frozen cold unable to move with an altered mental status... medic reports 4 patients treated for cold exposure with no transports to hospital required" and a dizzy 71-year-old woman.

It's too bad some people had medical problems and I hope they've all recovered.

However, let's remember that the rally took place in Omaha, not Miami, so anybody who went should have been prepared for the climate, and nobody should have gone who had a pre-existing condition that could have been a problem.

To summarize, yes, the bus service back to the parking lot could have been handled better and shouldn't have taken so long. Reflecting on the situation, I think that utilizing a different pickup area would have worked better.

But rally-goers weren't "stranded." And, regarding the medical cases, it would be interesting to study other major events, including rallies, concerts, and football games for comparison.

Click here for a more balanced news report from a local news source.

And, consider this tweet on the subject from Matt Walsh: "BLM is burning Philadelphia and rioting again in major cities across the country but somehow the top trend on Twitter is that some people at a Trump rally had some trouble getting a shuttle back to their cars."