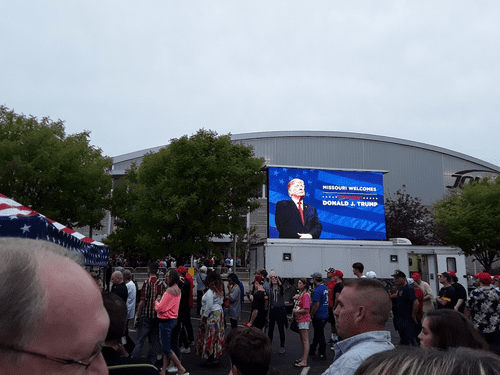 Memo From Middle America: Trump Triumphs In Missouri With Immigration Issue—Will It Work In the Mid-Terms?

See also, from 2015 Memo From Middle America: How Trump Has Connected With The Heartland

Coming Nov. 6 are the midterms that aren’t just midterms: They’re an encore to Nov. 8, 2016, when The Donald crushed Hillary Clinton and triggered the insane “Resistance” that has been smearing the good name of Judge Brett Kavanaugh for the last two weeks. 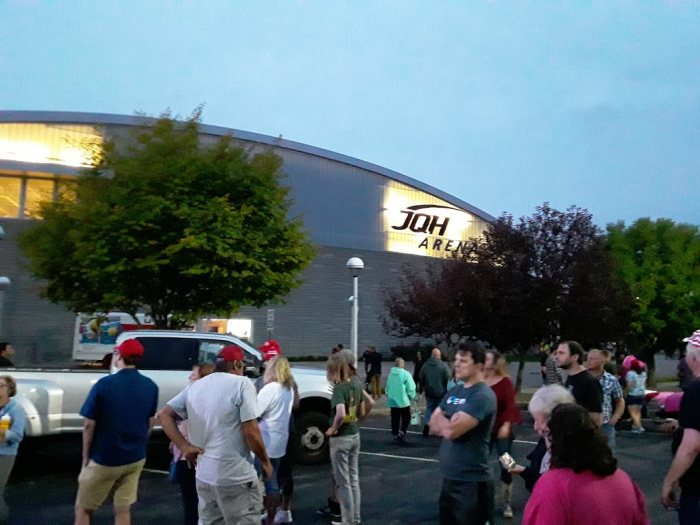 Trump didn’t back up an inch on Kavanaugh, repeatedly tweeting his support for the embattled nominee. And likewise, Trump is campaigning across the country for Republican candidates.

One is Josh Hawley, Missouri’s attorney general. He’s trying to unseat two-term Leftist Senator Claire McCaskill, who rates an F from Numbers USA. Recently, Trump appeared in Springfield at the JQH Arena at Missouri State University. I went but, like thousands who showed up, never got inside the arena. However, just being outside was an experience.

The take-away: Trump’s MAGA message is intact, he’s unafraid to pound the war drums on his key issue, immigration—and his audience still loves him.

Hawley would be a key Trump ally in the Senate. He has already launched a probe of Trump’s Tech Totalitarian foe, Google.  [This Peter Thiel-Backed Senate Candidate Has It In For Google, by Joshua Brustein, Bloomberg Businessweek, March 8, 2018]

But even better, Hawley is a committed immigration patriot. He bluntly told the immigration-enthusiast Springfield News-Leader

“The whole immigration system is a disaster, and Claire McCaskill should answer for that: she’s been in D.C. for over a decade and she has shown zero leadership to secure the border, stop sanctuary cities, or protect American workers…Nobody wants to see children and parents separated, just like no one should want to see illegal drugs and gangs pouring across our border. But none of that will change until McCaskill and the D.C. crowd take some responsibility and build the wall and secure the border.” 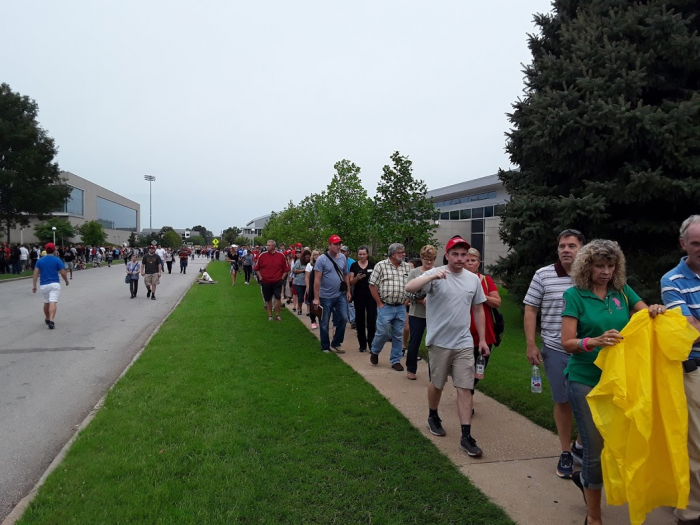 Springfield was the perfect venue for Trump. Missouri’s southwest Seventh District is “one of the most strongly Republican Districts in the United States,” Wikipedia reports, and in 2016, returned incumbent GOP Rep. Billy Long to Congress with 67.5 percent of the vote.

When our carload arrived, we quickly ran into some disappointed MAGA warriors. It was so crowded they didn’t expect to get in. The line snaked around campus and doubled back. It was clear we weren’t getting in, either.

Police tell me the JQH Arena May get to capacity. 11,000-plus expected at Trump/Hawley event in Springfield.
First people in line at 5:30am. Line is 2 miles long.@FOX2now @fox4kc pic.twitter.com/XXEimOu5JI

But we did speak to Trump supporters outside, including college Republicans and souvenir vendors. And got an eyeful of the outnumbered protestors. 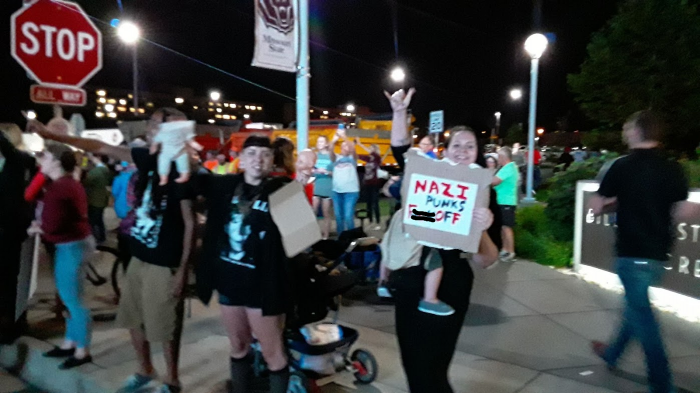 Their definition of love appeared on a sign: “F--- Trump Supporters.” Post-rally, I saw a protester brandishing another plea for tolerance: “Nazi Punks F--- Off.” She was also holding a baby, frighteningly enough. Oddly, another of the malcontents carried a dismembered baby doll, head in one hand, body in the other. Isn’t their side pro-abortion? A man to her right sent another message to Trump supporters: “Satan loves you.” Other protesters floated mini-versions of the Baby Trump balloon.

But forget about those aggrieved losers. The speech, heard on loudspeakers because the Jumbotron didn’t work, was pure Trump. Watch it below:

As always, his freewheeling delivery as he covers a dizzying array of topics is something to hear. The crowd was enthralled. They cheered, chanted or booed as the moment required.

“Hello Missouri. I’m thrilled to be back in the American heartland. I love you people, with thousands of proud, hard-working patriots,” he began. Hawley spoke for a few minutes, then Trump exhorted the audience to vote for Hawley: “We need Josh in the Senate to fight for Missouri and really, to fight for our whole country,” so “get out in 2018 because you’re voting for me in 2018, you’re voting for me.”

She wants to let everybody pour into our country. She wants to then give ‘em healthcare. Next will be ‘let’s also give ‘em free education. Let’s also hurt the state of Missouri and every other state’. You see what’s going on in California. He [Governor Brown] wants to have open borders. And everybody worldwide can pour into California. Just pour in. And he’s gonna give them health care and education. ... I think California will end up being larger than the United States, the whole world is going to come. It’s really bad stuff. ...

A vote for Claire McCaskill is a vote for Nancy Pelosi, Chuck Schumer and your new de facto leader of the Democrat party, the legendary Maxine Waters.

But Trump was just warming up. “The new platform of the Democrat party is radical socialism and Open Borders,” he said. “The Democrat party is held hostage by far-Left activists by angry mobs, Antifa, by Deep-State radicals and their establishment cronies.”

“The Resistance” and its violent goons, Antifa, he continued, are “lucky we’re peaceful.”

That’s an important truth. The vast majority of political violence today is from the Left. What if it were the other way around, or even equal?

Trump also linked the “so-called Resistance” to the midterms on Medicare, Venezuela, illegal immigration, and the National Question:

The so-called Resistance doesn’t accept the will of the American people. They don’t believe you have the right to run your own country, control your own lives or defend the nation’s Borders, traditions, and heritage. But the American people will never ever be silenced, you will never be silenced. We’ll never be intimidated and this November you will make your voice heard just like you did two Novembers ago. … Also at stake in this election is Medicare . Republicans want to protect Medicare. Democrats want to raid Medicare to pay for their socialism. We’ll end up being another Venezuela, that’s not going to happen to us. … Democrats want to destroy Medicare with so-called Medicare for all, robbing our seniors for the benefits for their entire lives. Republicans want to protect Medicare for our great seniors who have earned it and paid for it for many, many years they’ve been paying for it.

Democrats even want to give welfare and free health care to illegal aliens, all paid for by you the great American taxpayer. Republicans want to protect the safety net for truly needy Americans. Not for illegal aliens. We don’t want that. Can’t afford it.

And, Trump said, Democrats are beyond extreme on border security:

[T]he Democrat party, and they aren’t just extreme, they are frankly dangerous, and they are crazy. They’re crazy. Democrats want to abolish ICE. In other words, they want to abolish immigration enforcement entirely, let violent sadistic gangs like MS-13, the worst gang in the world, run wild in our communities.

I’ve seen our guys from ICE … MS-13, they’re tough. But they’re not tough like our guys. … They’re not tough like our ICE people. … We need tough people, these [criminals] are tough people. These are sadistic, mean, sick criminals. … Democrats want Open Borders which equals massive crime. Republicans want strong borders and we want no crime. we don’t want crime. Democrats support sanctuary cities, cities of crime that flood our streets with criminal aliens and violent gangs. Republicans believe that our country should be a sanctuary for law-abiding Americans not criminal aliens. … Every day our heroic ICE officers are tracking down gang members, predators, thieves and killers, and we are either throwing them the hell in jail or throwing them the hell out of our country.

The crowd went wild, cheering and chanting “USA!” Then Trump closed with an inspiring flourish:

Loyal citizens like you helped build this country and together we are taking back our country and returning power to where it belongs—the American people.

It was right here in Missouri the great explorers, maybe the greatest explorers, I know you’ve never heard of them, Lewis and Clark began their epic journey across the American West. They braved the wilderness, faced the unknown and never turned back until they achieved their incredible American destiny. …

Today we stand on the shoulders of the giants of American history. … Our ancestors crossed the oceans, settled a continent, won a revolution, and fought to victory in two world wars. American patriots like you defeated fascism, triumphed over communism and delivered millions into freedom. ... These courageous patriots did not shed their blood, sweat, and tears so that we could sit at home while others tear down their legacy, erase their history and sacrifice our proud American heritage. ...

Thank you, Missouri. Thank you, go vote for Josh.

Trump still has it. He still connects with Middle America.

But did he connect enough with Show-Me Staters to pull Hawley over the top? The Real Clear Politics polling average gives Hawley a 0.4 point lead, and calls the race a toss-up.

Still, the important point, as Trump said, was this: “This wasn’t about me, this is a movement.”

Because we are Americans and our hearts truly bleed red, white and blue. Now and forever we are one people, one family, and one glorious nation under God. … And we will make America great again.

That’s just the message Middle America needs to hear between now and November 6.