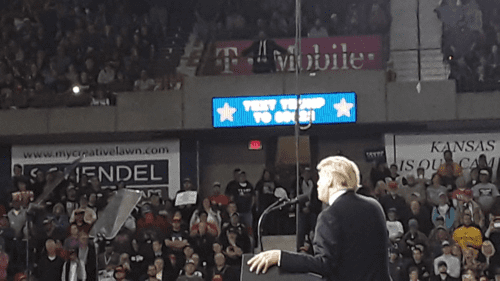 Trump Energizes The Crowd In Topeka. Will It Help In The Mid-Terms?

A Trump rally is a combination of an evangelical service, a circus, a fair and a rock concert. The excitement is palpable, and I think the Donald gets as big a charge out of it as the attendees.

Plus, it’s good for Trump to get out beyond the beltway and connect with his base. Here we have a New York City billionaire in tune with middle class American folks in Flyover Country. It’s amazing, and it’s why Trump won in 2016.

On October 6th, I had the opportunity to attend a Trump rally in Topeka, Kansas. It was great.

A couple of weeks previously, I had attempted to attend the Trump rally in Springfield, Missouri. I went there with my elder son (younger son couldn’t make it), my niece and a high school friend of my sons. By the time we got there, it was so crowded that we gave up on getting inside, though we had a good time outside. Unbeknownst to me though, my son was able to get inside to the rally though I didn’t know until it was over. (See Trump Triumphs In Missouri With Immigration Issue—Will It Work In the Mid-Terms? )

For the Topeka Rally, I made the trip with my younger son (elder son couldn’t make it), my niece, and two high school friends of my son (including one who went to Springfield.). The advantage this time was that it was on a Saturday and we left earlier.

The Topeka rally was held at the Kansas Expocentre, from which you can see the Kansas capitol building. The Expocentre is a complex of buildings, with the actual rally being held in the Landon Arena, which is next to the Domer Livestock Arena. (The Landon Arena is home of the Topeka RoadRunners, a team in the NAHL, a junior hockey league). 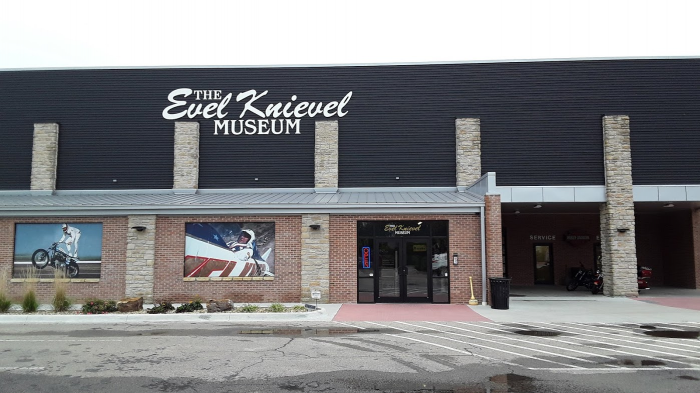 We parked at the Evel Knievel Museum (didn’t go in, but it must be interesting) and made our way to find the end of the line. It took us a while to get to the end of it, and there were soon plenty of people behind us.

We waited in line over two hours. It was a good experience though.

Despite those who slander Trumpsters as angry, deplorable haters, the mood was upbeat, positive, with no hate that I could see.

There were a number of vendors (a significant portion of them African-American) selling Trump paraphernalia. 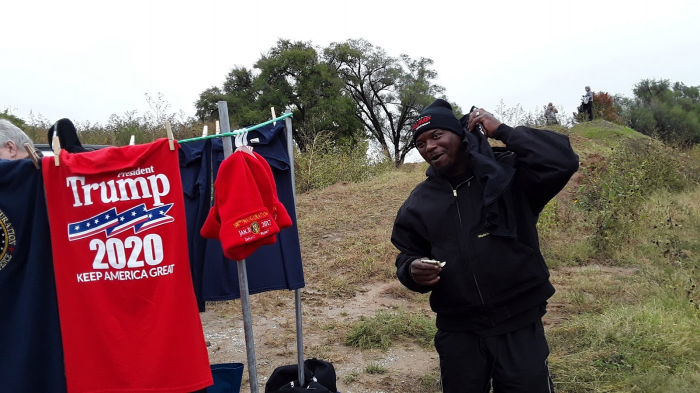 There were protestors somewhere in the area, but I never saw them.

While we were waiting in line, the news was released—Kavanaugh had been confirmed. In his speech a few hours later, Trump made a big deal out of it. It is a big deal.

The weather was cool as we waited outside, and got a little cooler with some light rain. A lady in line noticed that our two high school friends were in short sleeves, so on the spot she purchased long-sleeved sweatshirts for them. That’s the sort of people you were dealing with.

There was a carnival atmosphere about. One individual (whom I later saw when we got inside) was dressed as Honest Abe.

My son got into the act, donning a Trump mask, which was a big hit with other people in line, some of whom had pictures taken with him. 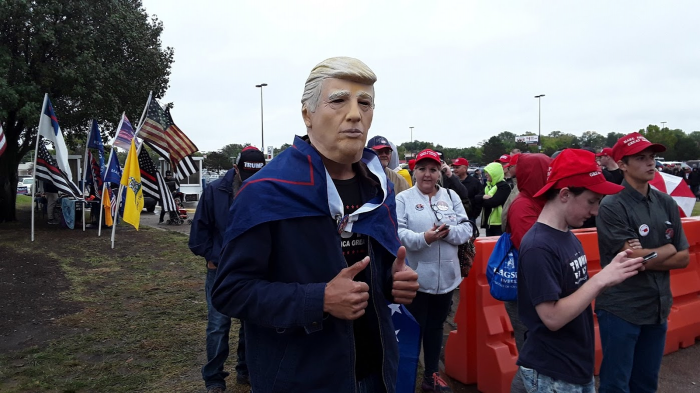 We finally got inside the arena, standing on the floor near the podium and to its left. The audience waited, and people were excited.

At one point, an individual came out and affixed the presidential seal to the podium, in preparation for the president. The audience cheered.

The first speaker was a black preacher, who delivered a prayer (in Jesus’ name), followed by the pledge of allegiance led by another man, and the national anthem a capella, led by the same black preacher.

After that, Brad Parscale, Trump’s 2020 campaign manager and Topeka native, spoke, and he and some campaign workers flung MAGA caps into the crowd.

After some more waiting, President Trump emerged and made his way to the podium. The crowd was ecstatic. 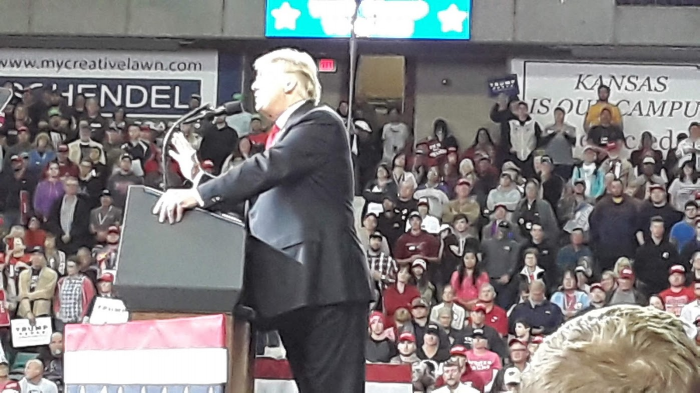 Trump greeted the crowd with “Hello Kansas” and jumped right into his speech. For an hour he kept the crowd transfixed. The people cheered and booed when appropriate.

Kris Kobach (candidate for governor of Kansas) and congressional candidate Steve Watkins delivered short addresses, as Trump stood to the side supportingly. After all, the mid-terms are getting closer by the day.

The Trump speech wasn’t the same speech he’d delivered in Springfield. There were common themes, of course. And there were exhortations to vote on November 6th.

In both speeches, Trump discussed the political situation, illegal immigration, trade, the economy.

In both speeches, Trump recounted how the U.S. embassy in Israel was moved to Jerusalem, and done much more cheaply by remodeling (with Jerusalem stone) an already-existing building. (Israel is popular in the heartland).

Both speeches, the Springfield speech and Topeka speech, were adapted to the local situation, politically, but also historically.

Near the end, the Springfield speech had referenced Lewis and Clark, whereas in the Topeka speech Trump talked about pioneers on the plains.

Some highlights (times based on script here)

The Trump Topeka speech was another Trump Triumph! Now if only it can translate into success on November 6th.

Or here is a longer, “full event” video by Right Side Broadcasting Network, which begins several hours before Trump spoke, showing the lines, the Kavanaugh process in D.C. and commentary.

Here is a transcript of Trump’s speech.

And get this: A photo of Trump in Topeka was the photograph at the top of Max Boot’s WaPo opinion column, ominously entitled The dark side of American conservatism has taken over . Obviously, Max Boot has a very different idea of what the “dark side” is than many Middle Americans.

And, the Max Boot piece was retweeted by Mexican meddler Arturo Sarukhan, former Mexican diplomat and ambassador to the U.S., now an “International consultant/speaker.

"The dark side of American conservatism has taken over" https://t.co/Y37UnfmxOa, @MaxBoot @PostOpinions

The Topeka Rally was great, so obviously enemies of the Trump Agenda would paint it as something evil.