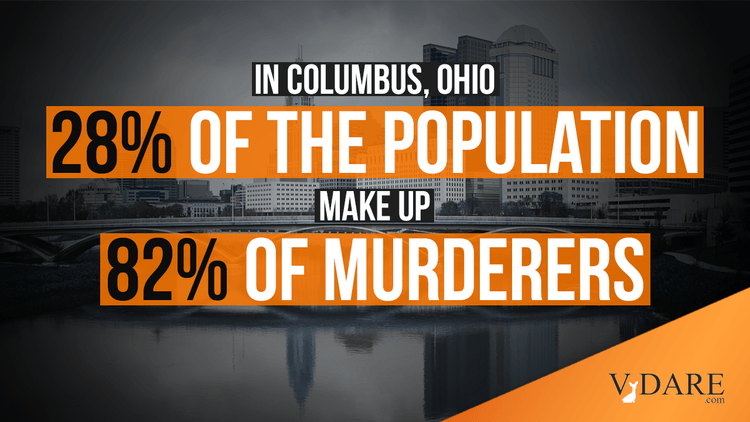 Every lie of our ruling class, the elite and the corporate media is exposed in this article detailing homicide in 2020 Columbus, Ohio and who/whom is doing the murdering in the city.

And it’s all inadvertent, because the media outlet covering the release of crime information for the race of victim and suspect is simply engaging in journalism and not obfuscation of facts.

It’s beautiful in its simplicity, clearly and concisely detailing the reality of not just who/who is committing the homicides, but what race is responsible for the interracial violence as well.

And in 28 percent black Columbus, Ohio, blacks are 82 percent of the suspects in the 2020 homicides. Blacks also make up 76 percent of the 127 victims, a reminder that the lie of Black Lives Matter is nothing more than a blood libel against White America to induce us to kneel before whatever lie is told to us regarding our complicity in black depravity.

We owe nothing more than the truth, which is, refreshingly, what this article out of Columbus offers in detailing who/whom is responsible for the carnage in the capital city of Ohio.

Over 75% of 2020 homicide victims in Columbus were black, police share in report,

The majority of those killed died from gun violence. The federal, state, and local governments have been pushing to decrease gun violence in Central Ohio.

“The suspect, under current law, could legally not possess a gun. Yet he allegedly did so anyway, violating Ohio’s weak law on criminals possessing guns — a law we have to toughen,” the governor said.

The U.S. Department of Justice also spoke out about the issue along with Columbus Police on Wednesday. U.S. Attorney David DeVillers said authorities are focusing on two Columbus neighborhoods.

“We’re going to prioritize those resources, those US attorneys, to prosecute violent crimes and gun crimes, specifically in the Linden and Hilltop neighborhoods,” DeVillers said.

Columbus Police also shared details on the homicide suspects. Of the 79 identified, 65 are black with 59 being black men, and nine are white with eight being white men.

The full statistics from Columbus Police can be read here.

Black lives don’t matter, as this article clearly indicates. And, in Columbus, Ohio in 2020, the vast majority of interracial violent crime is committed against whites by blacks.

The lies of an entire generation are exposed in just this one city, but simply seeing an honest report from a police department detail the truth about who/whom when it comes to the race and suspects in homicide.