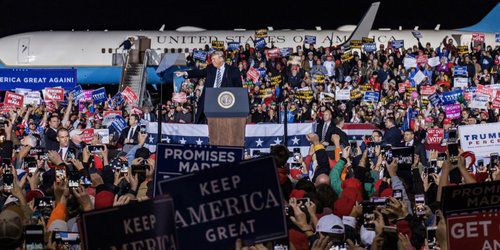 Allan Wall Watches Trump Campaign At Columbia, Missouri Rally: "We're Not Letting Them Into Our Country"

On November 1st, President Donald Trump delivered a speech in Missouri at the Columbia Regional Airport near Columbia, Missouri. I was in attendance at this rally, only five days after I had seen the President at the National FFA Convention in the city of Indianapolis, and less than a month after I had seen him at a rally in Topeka.

I attended the Columbia rally with my elder son (who found out about it) , my niece and a high school friend of the family. Of course we had to get there early, so as not to repeat our experience at the September 21st Springfield, Missouri Trump rally, where only my son got into the arena.

So we went early to Columbia, and waited for several hours.

The Columbia rally was in a hangar, my first hangar rally. Click here and here for photos.

While waiting, I had time to speak with Missourians, and it was valuable to get their perspective. The community aspect is another great thing about Trump rallies, conversing with Trump supporters. You have something in common.

The major goal of this rally was to support the candidacy of Josh Hawley, seeking to unseat incumbent Claire McCaskill from the U.S. Senate (F from Numbers USA).

Hawley is currently Missouri’s attorney general, sounds good on immigration, and is concerned about big tech companies, having launched a probe of Trump’s Tech Totalitarian foe, Google. [This Peter Thiel-Backed Senate Candidate Has It In For Google, by Joshua Brustein, Bloomberg Businessweek, March 8, 2018]

Not only did Hawley speak a few minutes during the speech after Trump called him over, but we also spied Josh Hawley before the rally and my son was able to talk with him.

Also present at the rally was the “My Pillow Guy”, Mike Lindell. Lindell, of Minnesota, is the inventor of the My Pillow product and CEO of the company. We saw him before the rally and I greeted him afterwards.

Another cool thing about this rally was we saw Air Force One, which arrived right to the hangar. That way, Trump could just get off the plane, then get back on after speaking.

Before Trump arrived, three men arrived to the podium. One gave a prayer (in Jesus’ name), another led the flag salute, and the other (who was John Ashcroft) led the national anthem. (Ashcroft is a former governor of Missouri, senator from Missouri and U.S. Attorney General.)

Then there was a succession of Missouri politicians who spoke:

Also present, though not speaking publicly was Representative Billy Long of the 7th district of southwest Missouri (B from Numbers USA). But he got a shoutout from Trump.

After the politicians there were Trump caps tossed out to the audience (my son got one, a green one that said “Make Farmers Great Again”).

After that was the moment when an agent affixed the presidential seal to the podium, a sign the President is about to speak there.

After more waiting, Air Force One arrived with President Trump, and he delivered his speech to an appreciative crowd.

You can watch Trump’s speech here, for a transcript of the speech click here, here is a local news item about it and here is a Fox News article.

Here are some excerpts from Trump’s speech:

The Democratic agenda is the agenda of the extreme far left. They've gone crazy, folks, they've gone totally loco… The Democrats are the party of rigid ideology, a total conformity. They demand absolute agreement and they dismiss, demean and demonize anyone who questions their radical ideas. Did you ever see anything like what's going on? You can’t have dinner.

…we're not letting them into our country. They're not coming in illegally. And you take a look at the scene with thousands and thousands of people are marching, and then you hear that Democrats want to have open borders and they want to invite caravan after caravan into our country, overwhelming your schools, your hospitals and your communities. And by the way, those caravans, you know you look at what's happening. Does anybody think that, just by accident that they're forming?

And the Democrats want to continue giving automatic, birthright citizenship to every child born to an illegal alien. Even if they've been on our soil for a mere matter of seconds, hundreds of thousands of children born to illegal immigrants are made automatic citizens of the United States every year. Because of this crazy lunatic policy that we can end… they're all made instantly eligible for every privilege and benefit of American citizenship. All of you, you get nothing more than they do, they're full citizens, and it's costing us many many billions of dollars a year….This policy has even created an entire industry. It's called, you know: birth tourism, where pregnant mothers from all over the world travel to America to make their children instant, lifelong citizens with guaranteed everything. …Birthright citizens in turn can then bring their entire extended family into our country through chain migration.

GET OUT AND VOTE GOP

You must reject the Democrat politics of anger and hatred and division and fear, and you see it, you must say no to open borders, no to socialism and no to higher  job killing taxes. You must say no to Democrats and you must say yes to Republicans. You must vote for Josh Hawley. Get out there loyal citizens like you, helped build this country and together we are taking back our country returning power to the American people. (01:04:56 - 01:05:38)

MISSOURI AND AMERICAN HERITAGE: LEWIS AND CLARK AND THE PIONEERS, THEIR LEGACY TODAY

It was right here in Missouri that the great explorers Lewis and Clark …began their epic journey across the American West. [In fact, Lewis and Clark camped a few miles away at the site of what is now Missouri capital Jefferson City on the Missouri River.] Their voyage of discovery led generations of tough frontier men and strong and brilliant pioneer women to defy the dangers and brave the wilderness, to build a life and to build a home.

Leaving the hangar we encountered a small group of demonstrators, most likely from the nearby University of Missouri.

Now whatever they might say about Trump supporters, if they thought we were that dangerous, would they be standing out there like that?

Will Trump and Middle America do well on November 6th? It’s almost time to learn the answer.