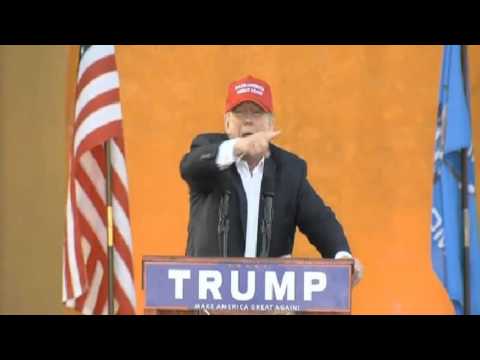 Memo From Middle America: How Trump Has Connected With The Heartland

The Main Stream Media and Beltway Right are touting polls showing Ben Carson is now leading Donald Trump in the critical state of Iowa [Poll: Ben Carson leads Donald Trump by double digits in Iowa, by Tal Kopan, CNN, October 26, 2015], ignoring his astonishing lead in both New Hampshire and South Carolina and the latest CBS poll saying he is actually even in the Hawkeye State. [Trump and Carson tied in Iowa, poll shows, by Lydia Wheeler, The Hill, October 25, 2015]. But Trump is just beginning his attack on Carson for his weakness on immigration, and my own observations suggest this New Yorker’s connection with the Heartland is very real.

I attended his recent rally in Oklahoma City. It’s clear Trump understands what the Republican Establishment doesn’t—the GOP only wins if disaffected white voters who might stay home actually turn out to vote. Trump is winning over those people who couldn’t bring themselves to support Mitt Romney in 2012.

Perhaps significantly, it was my son David and my (Mexican) wife who really wanted to go to the rally. My son even got to exchange greetings with The Donald!

As befits a superstar, Trump didn’t appear until an hour after the rally began, as more and more people kept arriving. The location for the rally was cramped, creating the sense of an overflowing crowd. And Trump’s give-and-take rapid-fire speaking style helped create a bond of intimacy between himself and his supporters. Here's the full video:

For example, when Obama was booed, Trump quipped “Oh, don’t worry, he’s only gonna be there for a short period now.” (After 21 minute mark)

The crowd itself was mostly white Middle America types—but then, that’s what most Oklahomans are. But there were some black folks there, and interestingly, Trump is drawing north of 20% of black voters in hypothetical matchups with Democratic candidates [Results of SurveyUSA Election Poll #22490, September 4, 2015]. That’s stratospheric for a Republican.

Before Trump spoke, there was a public prayer, another indication of how Trump is appealing to evangelicals.

What was truly striking was Trump’s remarkable rapport with ordinary Americans. Here was a New York City billionaire appealing to several thousand Okies. And yet everyone had something in common—love of country and disgust with our current bipartisan leadership.

Trump’s speech displayed an interesting combination of style and substance, both appealing to Middle America. Unlike any other candidates, Trump hammered away on trade deals. He also gave a nod to the locally important oil and gas industry. He seemed less likely to intervene in Middle Eastern countries than any GOP candidate except Rand Paul.

But this substantive approach was coupled with Trump’s emotional appeal to voters.

He mocked John Kerry’s bicycle injury and promised not to participate in bicycle races during his presidency.

He said of Hillary and Jeb Bush: “they’re all interchangeable”.

He also took a shot at the political class’s concern trolling:

Tone – you know tone – remember when Bush said to me I don’t like his tone, he’s too tough, his tone isn’t good. They’re cutting off Christians’ heads—ISIS is cutting off heads. They’re dunking them and drowning them in cages.

And Bush says to me, and Hillary Clinton says ‘I don’t like Donald Trump’s tone’. We need tough tone, we need it.

Trump took on the Main Stream Media, challenging the cameras to pan the crowd. This effectively created a sense of “us and them.” And Trump displayed real showmanship. A special surprise guest was Willie Robertson of Duck Dynasty fame, a Trump supporter. The final song was the 1984 Twisted Sister hit “We’re Not Gonna take It”. (Interestingly, Twisted Sister’s Dee Snider gave Trump permission to use the song. [Dee Snider on Why Donald Trump Can Use 'We're Not Gonna Take It', By Zach Schonfeld, Newsweek, September 8, 2015] In contrast, Snider refused permission to VP candidate Paul Ryan to use it in 2012).

Yet after years of disappointments from other candidates, immigration patriots are right to be suspicious of Trump. Does he believe his rhetoric?

Judging from the rally, yes. He repeats these themes over and over again, showing that these issues are constantly on his mind.

For example, regarding Mexico, Trump said: “I love Mexico, but we gotta build a wall on the border.”

Exactly. I love Mexico too, and my wife is Mexican (take that, Jeb Bush!). But our current porous border is a major humanitarian disaster zone. Good fences make good neighbors.

Trump has a habit of revisiting a theme several times in a speech. Later he referred to the wall again: “We need a border, we need a wall.” And later still “We’re gonna shore up our borders”.

Trump also visited the anchor baby fiasco a couple of times in his speech. The first (13 minutes) was this vivid description:

A woman is pregnant, she’s nine months, she’s getting ready to have a baby.

They bring her over to the border. They walk right past our patrols, which by the way, our Border Patrols are great people, but they’re not allowed to do the job, I have, they’re friends of mine, they stand there like this, they can’t do anything, people walking right in front of them, walking right into the country, so they’re standing there, they’re getting ready to have a baby, they go across the border, they have the baby in the United States, and we have to pay for that baby for 85 years, ok? Give me a break, give me a break. [Boos from audience]. So everybody said, oh you can’t do anything, you need a Constitutional amendment, every state has to approve…..

At this point, the Trumpian stream-of-consciousness took him from how the pundits said you can’t do anything about anchor babies to a discussion of how the pundits predicted he wouldn’t run, wouldn’t get far, etc. And then he went on to other things.

But, not to worry, much later in the speech (41 minutes) he returned to the anchor baby topic:

I was telling you about the anchor babies, look, I was with, I was actually in New Hampshire, and one of the people standing up there tonight [motions to cameras] said to me “Why do you use the term anchor babies?” I said “What term would you use?” and he gave me an eight-word definition: “the children of undocumented workers who happen to be in the United States, blah, blah.” I said no thanks, I’m gonna go anchor babies, but think of this, think of this, just think of this, I turned out to be right. I was telling you, we don’t have to support [anchor babies], the law is on our side, nobody knew that, all we need is a simple amendment in Congress, and we might not even need that. Let me tell you, we’re about the only country, there are very few [countries that do it] and people come from Asia, and people come from Mexico, and from all over South America, Latin America, and they come into the United States, and they have the baby, we take care of that baby 85 years, but it’s not gonna happen anymore, not gonna happen anymore, not gonna happen [raises voice], so here’s what we’re gonna do, here’s what we’re gonna do, we’re gonna be so smart, we’re gonna be so tough…

And remember this, remember this about the election, cuz ultimately it’s very important we get somebody that’s gonna win this time. We’ve energized the base, with Romney there was no energy. If the people that sat home and didn’t vote, for whatever reason they just didn’t have the feeling for Romney. Who knows why I don’t know, good-looking guy but nothing else works. He had the look, he had nothing else, ok. But they didn’t, they weren’t energized and millions and millions of people stayed home.

The truth is that if the people that are here tonight – with this, I mean this is probably the biggest rally they’ve ever had here, would you say this is a record, I think so—

My conclusion: There is something real happening here. Whatever his initial motivations, Trump has started a movement and is connecting with the dispossessed masses of Middle America. After years of following politics, it’s easy to be cynical. But having seen Trump work the crowds in person, it’s hard not to be caught up in the excitement.