Donald Trump had a rally in Oklahoma City on February 26th, and my family and I attended. It was our second Trump rally (see here for our first) and this one was fun too.

Trump has a real ability to connect with ordinary American people and it could take him to the White House. Here was Trump, a New York City billionaire, being warmly received by thousands of Okies, with whom the candidate shares common American values.

Check the video below of Trump’s February 26th OKC rally and here and here are some local media articles about it.

At OKC, Trump was accompanied by former opponent and governor of New Jersey Chris Christie, who has just endorsed Trump. And before Christie spoke, black pastor Mark Burns offered a prayer and delivered a fiery discourse in favor of Donald Trump. There was also a Pledge of Allegiance led by a veteran and then the National Anthem sung by a little girl.

The Trump speech lasted 50 minutes and included typical Trump themes, updated to this point in the campaign, including the previous night’s debate.

Trump got a big applause when he talked about the Second Amendment, and he remarked “Boy, you people, you do like your guns, don’t you, huh?”

One of the purposes of the rally was to get support out for the Super Tuesday primary, just a few days away

“I don’t want your money. What I want is your vote” said Trump near the end. The candidate exhorted the audience to “Get out and vote on Tuesday”.

My 16-year old son David had a plan for after the speech, to get Trump to sign his copy of Donald Trump's book Crippled America.  But it wasn’t possible, there were just too many other people meeting Trump. 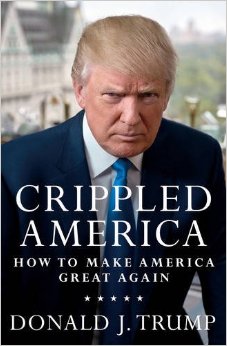 However, we were able to greet Chris Christie, who was very friendly, and David even had Governor Christie sign Trump’s book.

All in all, it was a great rally. I see a real connection between Donald J. Trump and the historic American nation.