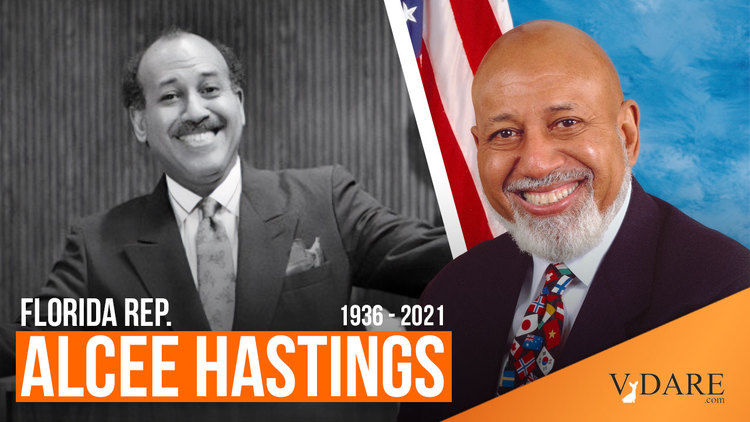 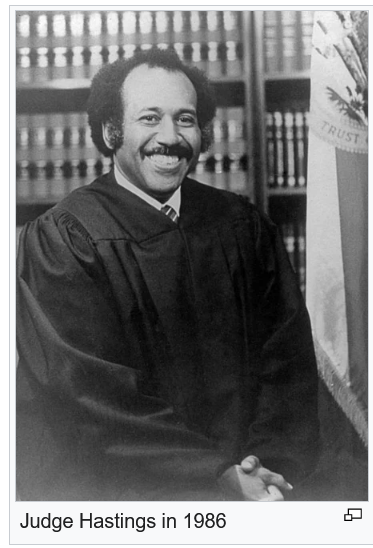 Alcee Lamar Hastings, September 5, 1936–April 6, 2021,  was the Congressman for Florida's 20th congressional district. Wikipedia points out that this district "includes most of the majority-black precincts in and around Fort Lauderdale and West Palm Beach"—that is, it's the result of a Voting Rights Act gerrymander intended to produce a majority black district.

It also produced voters who don't care that their Congressman was impeached and convicted, while a Federal Judge (he was a Carter appointee...of course), of soliciting a bribe.

Steve Sailer talked about Voting Rights Act gerrymanders and the politicians produced by them in 2010:

Indeed, the VRA has been terrific for the careers of low-level black and Hispanic politicians. There will be 42 blacks in the House of Representatives, or 9.6 percent of the 435 total.

Nevertheless, forty are Democrats, generally of less than edifying quality: Maxine Waters, Alcee Hastings, Bobby Rush, and the like. (One reason the MainStream Media boosted Obama so shamelessly in 2007–08 is that, for all his shortcomings, he's a much classier product than the typical black politician of the 21st Century.)

VDARE.com has frequently expressed the opinion that the impeachment power is underused, especially on judges:

And in fact impeachment, history shows us, has been used against Federal judges far more often than against presidents. As of the beginning of 2020, 66 judges had been investigated for impeachment since the ratification of the Constitution, and only seven removed. (Black judge Alcee Hastings, removed in 1989, went on to be a congressman from Florida’s majority-black 20th District.)

Ann Coulter wrote up Hastings as an example of problems for Nancy Pelosi in 2018:

How about Rep. Alcee Hastings, an impeached and convicted bribe-taker? His seniority surely requires giving him a committee chairmanship! Is Pelosi going to discriminate against Hastings just because he's a proud black man? Right now, Pelosi is trying to determine which committee chairmanship requires no honesty whatsoever.

Note: At the time of his death, Hastings was Vice Chair of the  Committee on Rules.

Michelle Malkin wrote up Hastings as an example (not the only one!) of corruption in the Black Caucus in 2016:

Then there's Alcee Hastings, the 12-term Florida corruptocrat impeached while a federal judge in 1989 for making false statements and producing false documents in a 1983 criminal trial accusing him of seeking a $150,000 bribe. He went on to win a seat in Congress in 1992 and used his position to enrich his various lady friends, including paying one girlfriend-turned-congressional deputy district director more than half a million dollars in salary and another he calls a "staff assistant" to accompany on his endless junkets abroad.

Malkin also mentioned him in 2006, when he was being considered, as a result of Republican midterm loss of the House,  for Chairman of the Intelligence Committee:

Case in point: Which congressman is Mrs. Clean considering as chairman of the House Permanent Select Committee on Intelligence? Impeached federal judge Rep. Alcee Hastings, D-FL, who took bribes, lied under oath and was kicked off the bench.

It would have been crazy to put a man like Hastings in charge of the Intelligence Committee. Even aside from his impeachment, they don't usually give security clearances to people who are almost 8 million dollars in debt—Hastings was never able to pay his legal bills from his 1980s criminal trial.

In a 2011 survey of U.S. lawmakers, the Center for Responsive Politics named Hastings the "Poorest Member of Congress," with a 2018 average net worth of −$7,549,002.[33] His congressional financial disclosure form indicated that, as of 2010, Hastings did not have any earned income, had a bank account with a balance in the $1,000 to $15,000 range, and owed several million dollars in legal fees to several attorneys stemming from the 1981–1989 charges.[34]

Finally, Hastings had an F- rating at NumbersUSA, the lowest possible. That's both in the most recent congress, and for his entire 28 year career.  That's in spite of the fact that the Florida district he represented is Ground Zero for black displacement by Hispanics.

Patrick Cleburne noted in 2010 that the "50 Worst" congressmen named by NumbersUSA included a lot of blacks:

[T]here can be no doubt that flooding the country with unskilled workers has been a disaster for American Blacks, reducing their employment, depressing their incomes, and actually endangering them.

So why do Black Congresscritters comprise a quarter of the House tally on this list—all certain to be reelected? Don’t they care about their fellow Blacks?

It has to be said that the Congressional Black Caucus in general is a remarkable concentration of moral turpitude. This particular collection is graced not only by Rep Charles Rangel but also the astonishing Alcee Hastings—the Federal Judge impeached by a Democratic Congress for corruption but subsequently elected to the House by Florida’s 23rd district….[Redistricted to 20th in 2012, but maintaining the gerrymander]

This is a case of hatred for white American society transcending any other consideration. Third world immigration is a weapon.

There's a lot more to be said about Hasting's career, but that's what we've said here, over the years. Because of the aforementioned gerrymander, any  Congressman or -woman elected from Florida's 20th District to replace him will be almost as bad.