It has long been the dream of race hucksters like Jesse Jackson that America's changing demographics would allow the people of color to join together in a cheerful Rainbow Coalition to advance an anti-white, redistributionist agenda. Once whites were outnumbered by colorful people, the theory was, racism would fade away and paradise would prevail. Like we have in California.

It hasn't quite worked out that way.

Today's exhibit [How a Community Imploded, LA Times 3/05/07] is the tale of planned terrorism against black citizens by Mexican gangsters in the Harbor Gateway area of Los Angeles.

VDARE.com has noted the hispanic gang murder of 14-year-old Cheryl Green, a black teen who was killed for "trespassing" on Mexican turf near her home in the neighborhood last December.

But the body count doesn't end there. Earlier reports have observed the ethnic cleansing aspect of Mexican gang attacks against random blacks to drive them out of the area. According to LAPD statistics, from 1994 to 2005 there were nearly five times as many homicides, assaults and other violent crimes by Latinos against blacks as by blacks against Latinos in Harbor Gateway.

In September 2001, Robert Hightower, a 19-year-old Pasadena high school senior, was shot to death after hugging his sister, whom he had been visiting. A 204th Street gang member shot him, according to court testimony, because he was upset that a black boxer had beaten a Latino in a prizefight.

In 2003, Eric Butler, 39, was shot to death as he drove from the neighborhood's lone business, the Del Amo Market, which the gang considered to be in its territory. He'd gone there to intervene after gang members began harassing his 14-year-old stepdaughter. She was shot in the back and lives today with a bullet lodged near her spine. 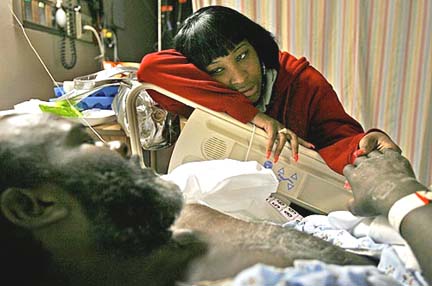 "ALTERED LIVES: Dunya Wagoner holds husband Carl’s hand at a medical facility on Valentine’s Day. He is bedridden after losing a leg in a Harbor Gateway shooting last August. He also lost his auto-shop business."

There are smaller intrusions as well, like the virtual imprisonment many black citizens feel — for example, the kids who aren't allowed to play outside because it is too dangerous. No American should have to live in such conditions, particularly when they are caused by Washington's infatuation with exploitable labor and open borders. A plague of criminal immigrant gangs was the foreseeable blowback.