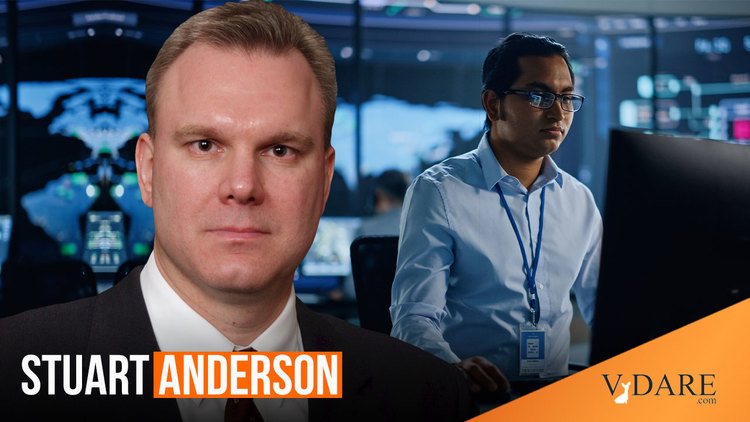 After All These Years, Stuart Anderson Is Still Pushing Cheap Labor Tech Immigrants

Long-time cheap labor shill Stuart Anderson writes in Forbes that America needs to displace native-born Ph.D.'s and other tech workers at a higher rate than it already is:

In 2022, a country’s national security and economic vitality center around talent. Leadership in China, Russia and other countries have taken steps to help ensure their nations have the scientists and engineers needed in the 21st century. Analysts say the United States carries natural advantages in the global competition for talent but risks falling behind because it is too difficult for talented foreign-born individuals to stay or immigrate to America.

Some context: Stuart Anderson reviewed Alien Nation negatively in 1995, and also attacked George Borjas's Heaven's Door in 2002 in the pages of Reason magazine.

At the time he attacked Heaven's Door,  libertarian think-tanker Anderson was actually ensconced in the Bush Administration INS as "Executive Associate Commissioner, Office of Policy and Planning".

A sample for Anderson's rhetoric, from his attack on Borjas:

Some history is necessary to understand the changes in immigration policy that occurred in 1965. In the 1920s, Congress replaced what had been a policy of nearly open immigration with "national origins" quotas that, in effect, barred Asians, Italians, Greeks, and Jews. These quota laws, passed after lobbying by the Ku Klux Klan and others, codified the eugenics theories of Madison Grant, whose work focused on the supposedly inferior skull sizes of Jews and other immigrants.

This is an almost completely false picture of the passing of the Immigration Act of 1924.

Now, the fact is that immigration benefits (a) the immigrants themselves, and (b) employers of cheap labor—like the people who fund Anderson's National Foundation for American Policy.

The only thing that can be said for immigrant Ph.D.'s as cheap labor, as opposed to fruit pickers, is that the immigrant Ph.D.'s may pay more in taxes than they consume in education for their children and other benefits.

What the Ph.D.'s do is displace a better class of American.

One of his examples of the useful immigrant is Cold War-era Hungarian immigrant Katalin Karikó, who

produced the underlying research breakthrough that made messenger RNA possible for vaccines to combat Covid-19. She earned her Ph.D. in Hungary but spent years in America on an uncertain career path, first as a postdoctoral researcher, before her work became recognized as groundbreaking. Approximately 56% of postdoctoral researchers work on temporary visas, with many in biological sciences, medical sciences, engineering and research and development.

But as I pointed out recently in Katalin Karikó And The Invisible Victim: Green Cards Bring In Indentured Servants Who Take American Scientists' Jobs, she seems to have been an illegal immigrant, a visa overstayer working illegally, and even if she were legal, the Green Card scientists hired by universities are also bad for America, but good for the university's budget.

The Invisible Victim here is the American scientist who couldn't get a job, or afford to take a job, at Karikó's University of Pennsylvania because all these legal "aliens" and even illegal aliens have taken his place at starvation wages.

He's also continuing the argument that the U.S. is "losing" valuable H-1B indentured servants to Canada that I demolished in Indian Immigrants Heading To Canada To Steal Canadian Jobs Because Trump's H-1B Caps Haven't Been Raised By Biden.

I expect him to go on saying it, because as I wrote in 2011 in The Fulford File | Christmas Appeal For Starving VDARE.com Workers, the amount of funding available for people who will say things like that is fantastic.

We, on the other hand, are limited to what people like you donate.

(I'm only mentioning this in passing, but if you do want to donate—tax-deductibly—you can do so here.)