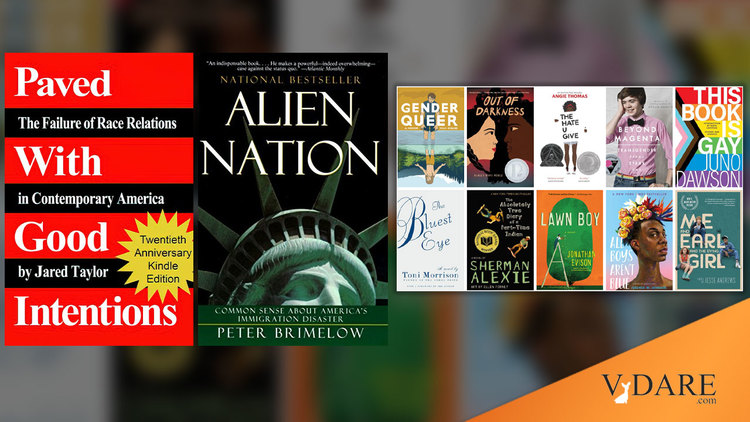 The NYT's "Banned Books" List: Grossly Misleading As A Measure Of American Close-Mindedness

Who among us doesn't tuck in to a story about "banned books," eagerly looking for bad guys to sneer at?  Because we civilized, free speech–minded types aren't book banners ourselves, and we'd like to know about these uptight hypocrites who are so afraid of a few printed words.

We’d rather be the heroic mom in Field of Dreams calling out the stuffy farmers at the school board meeting for opposing controversial books.

But cracks appear in this narrative upon closer inspection.  The NYT’s treatment of the American Library Association’s list is a good example [Book Banning Efforts Surged in 2021. These Titles Were the Most Targeted, by Elizabeth A. Harris and Alexandra Alter, April 4, 2022].

“What we’re seeing right now is an unprecedented campaign to remove books from school libraries but also public libraries that deal with the lives and experience of people from marginalized communities"https://t.co/LI8uVNBfSU

First, there's a galaxy's worth of difference between a parent who doesn't want their kid getting fed raw political propaganda in school, and someone who'd ban a book for all people, in all places.

That’s what the word “ban” implies.

The latter is surely an extreme rarity, while the former is, well, pretty understandable.

Second, it's worth examining the methodology of this "banned book list":  it's by the NYT's admission a self-reporting exercise, and appears to involve mostly books meant for kids in school.

But to even get to that point, the books have to get written, published, and placed in the schools.  Conservative-leaning books wouldn't even *get* to that point to begin with, so this is surely not an accurate measure.

Imagine a Jared Taylor book sneaking onto the bookshelf at the local high school.

Third, consider the politics of the school officials and the American Library Association.  I'm going to go out on a limb here and say they're far more motivated to put out lists like these because they know the media will lap it up with a spoon.

Fourth, it’s not like most of these books are masterpieces of literature.  Mostly they’re cutely-titled, colorfully illustrated propaganda vehicles.

The only one that might rank is the Toni Morrison novel—and as James Fulford has pointed out, Morrison's books aren't suitable for young people. This Book Is Gay is just pro-gay cheerleading in book form.