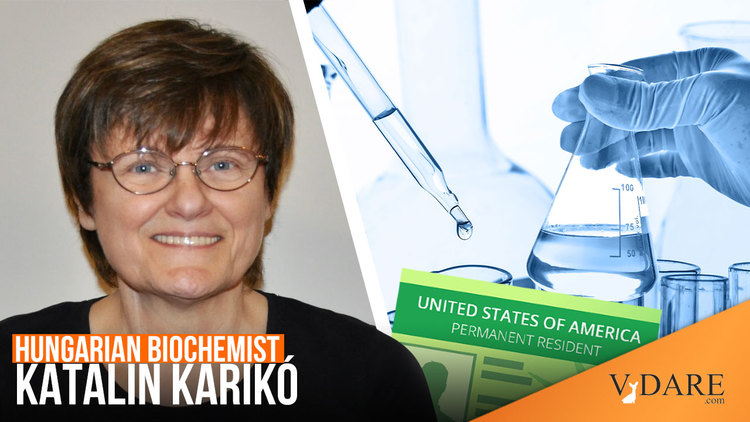 A thread on Twitter about Hungarian vaccine scientist Katalin Karikó, by Dartmouth Economics Professor Paul Novosarad, says that years ago Temple University biochemist Robert Suhadolnik, who died in 2016, tried to have her deported when she tried to leave Temple for Johns Hopkins: 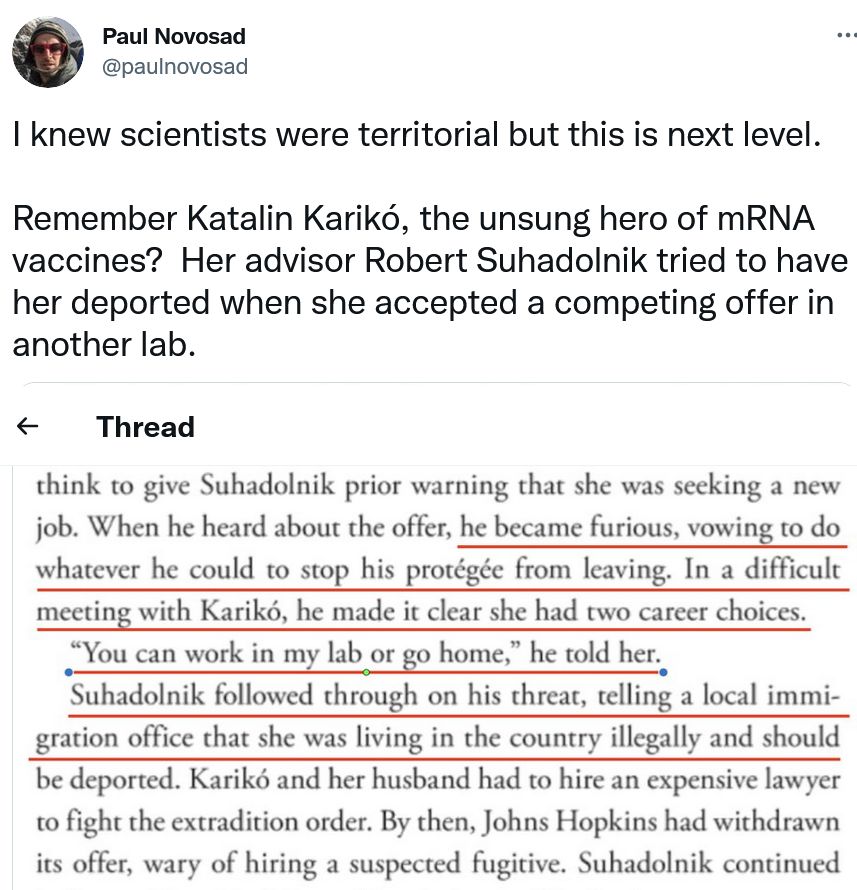 Novosarad goes on to quote, with screenshots from a book about the development of mRNA vaccines by Gregory Zuckerman, A Shot To Save The World.

I got the book and am quoting it below, in blockquotes with emphases added:

In 1985, Karikó decided to move to the United States, though she and [her husband] Francia barely spoke English. They bought one-way tickets, hoping to force themselves to persevere in their new home, rather than consider returning to Hungary. Boarding a flight in Budapest, Karikó was more nervous than most new immigrants. The Hungarian government prohibited citizens from leaving the country with much cash, so Karikó had sewed the family’s savings—about twelve hundred dollars, the proceeds from the sale of their car—into a hole she had carved in the stomach of a teddy bear held by her two-year-old daughter, Susan. The toy escaped notice and the cash was all the family had to rely on when they touched down in New York to restart their life.…

It's an inspiring story, if you like, but I don't see anything about her getting a Green Card:

Karikó found a position working in the laboratory of Robert Suhadolnik, a professor in the biochemistry department at Temple University School of Medicine working on AIDS treatments. Money was tighter than she had expected. Karikó made seventeen thousand dollars a year, while Francia, who was unable to find an engineering position, made about the same as a facilities manager for a local apartment complex, where he fixed heating and water systems. Their own apartment didn’t have a washing machine, so every few days Karikó lugged the family’s laundry to the basement of a nearby building.…

That’s when she made her first mistake as an academic. Karikó accepted a better-paid position at Johns Hopkins University but didn’t think to give Suhadolnik prior warning that she was seeking a new job. When he heard about the offer, he became furious, vowing to do whatever he could to stop his protégée from leaving. In a difficult meeting with Karikó, he made it clear she had two career choices.

Suhadolnik followed through on his threat, telling a local immigration office that she was living in the country illegally and should be deported. Karikó and her husband had to hire an expensive lawyer to fight the extradition order. By then, Johns Hopkins had withdrawn its offer, wary of hiring a suspected fugitive.…

I'm pretty sure that means that she didn't have a Green Card and was a visa overstayer, but never mind, even the Green Card scientists hired by universities are bad for America, but good for the university's budget:

She quickly realized she was something of a second-class citizen at the Ivy League school. Her job was to do research and deliver a few lectures for graduate students, but she would never be eligible for tenure, unlike most other faculty members. The cardiology department was composed of physicians who treated patients, did research, and brought in money from grant proposals. PhDs like Karikó were there to help these physician-scientists. The research-assistant professors usually were foreign-born researchers—some faculty members referred to them as “the aliens”—willing to overlook meager salaries for the experience of working in the university’s world-class labs and because Penn promised to support their green-card applications.

So I assume that Katalin Karikó got her citizenship status straightened out, and her daughter did too, because the daughter was an Olympic Gold medalist in rowing—for the United States, not Hungary—but let's remember the Invisible Victim here: the American scientist who couldn't get a job, or afford to take a job, at the University of Pennsylvania because all these legal "aliens" and even illegal aliens have taken his place at starvation wages.