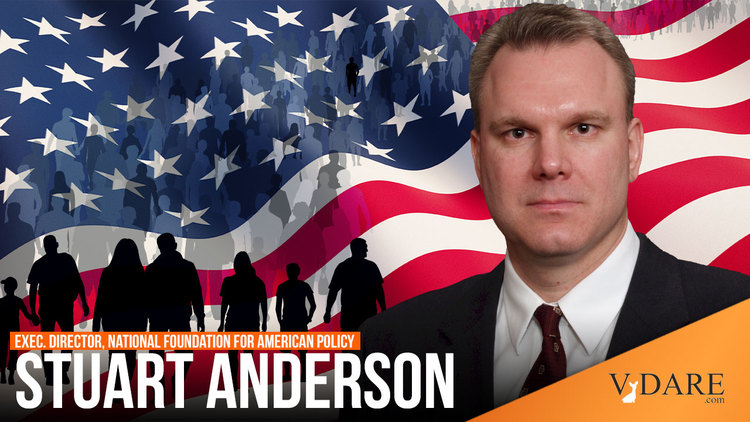 Every excuse is used to justify increased migration.

Now that the U.S. is getting involved in Great Power competition with China, the open borders zealots have stumbled upon another pretext to open the immigration floodgates.

You can always count on the rootless libertarians at Reason to faithfully push for mass migration, consequences be damned. In an article at the libertarian magazine, immigration enthusiast Stuart Anderson, the Executive Director of the National Foundation for American Policy, wrote about Chuck Schumer’s (D-NY) Endless Frontier Act and how it doesn’t go far enough in importing “high-skilled” foreign nationals:

The Senate will soon consider a bill that supporters say will help U.S. companies compete against China with innovative products. However, the bill leaves out the most vital element: talented people to produce the innovations.

Senate Majority Leader Chuck Schumer (D–N.Y.) plans to move forward with his Endless Frontier Act, which has several Republican co-sponsors and was approved by the Senate Commerce Committee on May 13. The bill gives new planning authority to the National Science Foundation, but contains no provisions to welcome and retain high-skilled foreign nationals, who in recent years have accounted for 70 to 80 percent of the full-time graduate students at U.S. universities in computer science and electrical engineering.

[Immigration Is the Most Important Way To Beat China, by Stuart Anderson, Reason, May 17, 2021]

In the piece, Anderson appealed to the overused argument of immigrants supposedly forming lots of new companies:

Innovations are often developed through forming new companies. Research from the organization I lead, the National Foundation for American Policy, concluded that more than half of America's billion-dollar startups had at least one immigrant founder.

For example, semiconductors dominate the competitiveness debate, and immigrants helped start the two companies making much of the innovation in chips possible: Synopsys and Cadence Design Systems. Jim Keller, who has designed chips at Apple, Tesla, and Intel, and other companies in the field, pointed out a great deal of innovation was taking place in America in chip design but that "little of the activity would be possible…without advances in design software by Synopsys and its biggest rival, Cadence Design Systems," according to The New York Times.

Mass migration enthusiasts like Anderson should hit the books for once. The U.S. bult a vast nuclear arsenal, got a man to the moon, and laid out a highway system that became the envy of the world during the 20th century without having to import thousands of non-white workers. White civilizations are flat-out better at innovating, and they don’t need non-white labor to reach the stars. If anything, adding helot laborers and foreign subversives will be a net drag on white civilizations.

Let’s be honest here. Chinese migrants have a dubious distinction of being overrepresented among foreign nationals committing espionage [Survey of Chinese-linked Espionage in the United States Since 2000, CSIS, 2019]. Unlike the American government, which has lobotomized itself with anti-white propaganda, the Chinese know how to use statecraft and will assuredly exploit the cracks in America’s immigration system to expand its influence within our shores.

In a country concerned with trying to prosecute a Cold War, or at least some kind of competition, with China, it’s hilarious that America's punditocracy is calling for an increase in legal migration from China to combat China.

The commitment to immigration runs very deep among these folks. So deep that it clouds their better judgment and makes them ignorant of the uncomfortable fact that Chinese nationals residing stateside, who already comprise a significant segment of immigrants who come to the US legally, have a sizeable spook population among them [Census: China Sending More Immigrants to U.S. than Any Other Country, by John Binder, Breitbart, Januay 2, 2020]. If present migratory trends continue, America could witness the largest fifth column form within its borders as Chinese nationals continue embedding themselves in American universities and businesses.

Talk about a self-own of epic proportions. But that’s multiculti USA for you. A land whose rulers are fueled by instant gratification and the perpetual desire to keep the big red line going up irrespective of the long-term consequences of unwise political decisions.