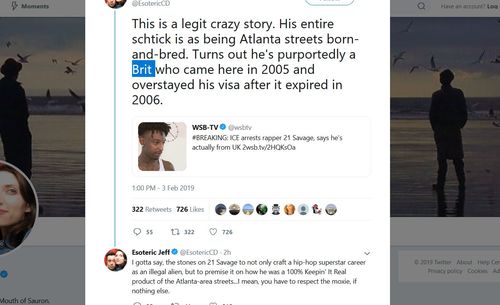 21 Savage, Illegal Alien Rapper, Is The Guy Who Said "I Don't Think People Really Understand How Hard It Is to Be Black"

Here's a news item about how 21 Savage, a rapper, has been arrested for being an illegal alien from Britain.

This is a legit crazy story. His entire schtick is as being Atlanta streets born-and-bred. Turns out he's purportedly a Brit who came here in 2005 and overstayed his visa after it expired in 2006. https://t.co/3YDno4KRSB

Rapping is not a job black Americans are unwilling to do.

I checked to see if he'd ever been mentioned before, and yes, he's this guy I blogged about in 2017. 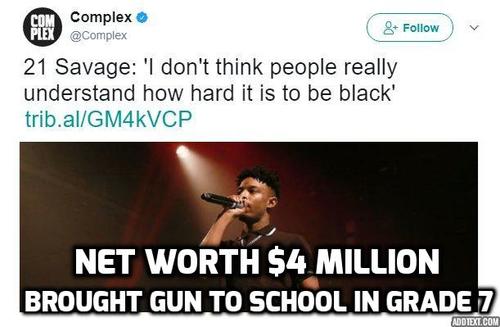 I had never heard of this guy 21 Savage before Jack Burton tweeted this:

I don't think black people really understand how tired everyone else is of hearing how hard it is to be black. pic.twitter.com/qY2LxdprtE

My interest in rap flickered and died around the time "My Definition Of A Boombastic Jazz Style" came out. However, a quick Google tells me that rapper 21 Savage has a net worth of maybe $4 million at the age of 25 and a "violent past".

"Violent past" means, among other unspecified violences committed when he was a member of the Bloods, that he was kicked out of school in Grade Seven for bringing a gun to school.

Oh, and he's an immigrant, born in Dominica, but raised in the USA.[According to Wikipedia at the time,based on a since-deleted section of his 2016 SXSW bio.] So, yes, not the guy you'd pick to listen to about how hard it is to be black.

For more on people who have no business whining about racism, see my Profiling Is Wrong No Matter HOW Right It Is—As Ex Drug Dealer And Thug Jay-Z Explains.

Mr. Abraham-Joseph [21 Savage's real name] initially entered the U.S. legally in July 2005, but subsequently failed to depart under the terms of his nonimmigrant visa and he became unlawfully present in the U.S. when his visa expired in July 2006. In addition to being in violation of federal immigration law, Mr. Abraham-Joseph was convicted on felony drug charges in October 2014 in Fulton County, Georgia.

2005 was when he was 12 years old. I don't think that makes him a DREAMer, but it does explain how he was able to bring a gun to an American school in Grade 7.