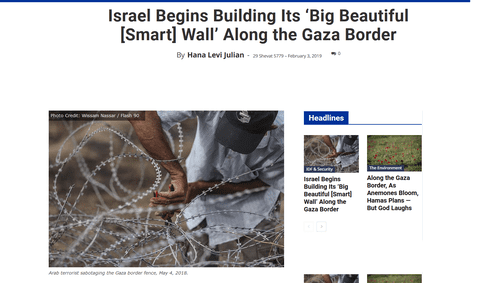 Israel To Build ANOTHER Border Wall: A "Big Beautiful [Smart] Wall" On The Gaza Border

Israel said Sunday that work to strengthen its border with the Gaza Strip had entered a new phase, with construction starting on a massive new barrier along the frontier.

"Over the weekend we began building the above-ground barrier along the Gaza border," Prime Minister Benjamin Netanyahu told journalists before the weekly cabinet meeting.

The barrier, set to stand six metres (20 feet) off the ground, "will prevent terrorists from Gaza from penetrating into our territory on the ground", he said in Hebrew.

Netanyahu gave no further details but a defence ministry statement said that work on the structure began Thursday.

It is set to follow the 65-kilometre (40-mile) course of an underground barrier also under construction meant to neutralise the threat of cross-border tunnels built by Gaza militants.

At its western end, the statement said, the above-ground barrier would join a fortified sea wall jutting into the Mediterranean, aimed at blocking Palestinian attacks by water.

"It's massive and especially strong," the ministry said in an accompanying video clip.

This was one of the featured stories on Twitter but there wasn't the usual flood of racism and fascism accusations from the bluecheck brigades.

One important note about this fence is it shows what a real "smart fence" would look like, with sophisticated monitoring technology combined with physical barriers.

The underground barrier work “will continue in parallel with the work on the fence,” according to the Defense Ministry.

“The barrier is similar to the one on the Egyptian border, but it has significant improvements and includes innovative security elements,” according to the statement from the ministry.

The recently-built security fence along the Egyptian border has dropped the number of infiltrations from the Sinai to zero.

This is in contrast to the model the Democrats want, where billions of taxpayer dollars are spent on something that is meant to fail.