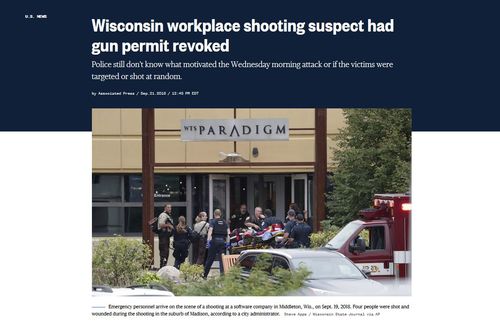 A Reader Wonders If Madison, WI Shooter Anthony Tong Is An Immigrant Or Not

While you’re on the subject of disgruntled minorities committing workplace massacres, you might want to investigate Anthony Tong, who shot up his Madison, WI workplace on Wednesday. I cannot find a picture of him, but I also can’t find any pictures of Anthony Tongs who aren’t Oriental. [Wisconsin workplace shooting suspect had gun permit revoked | Police still don't know what motivated the Wednesday morning attack or if the victims were targeted or shot at random, by Associated Press, September 21,2018 ] Is he an immigrant? You are always ahead of me on these kinds of revelations.

James Fulford writes: I still don't know, either. I only know that as usual, the police aren't saying and the press aren't  asking.