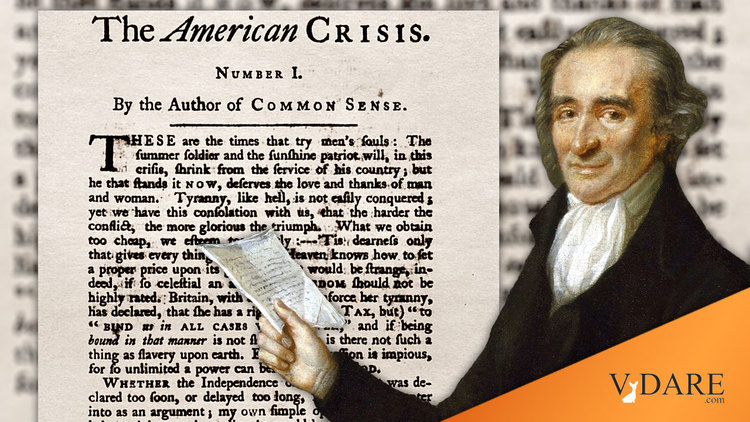 From: Luther Emeric Martel [Email him]

In the hot summer of 1776 the Declaration of Independence, with bravado, told King George III to go take a hike. Then December came and Washington’s soldiers had to live with the freezing reality of a winter encampment. It was not Valley Forge, that would come the next year. It was a different place, McKonkey’s Ferry, but that winter was just as cruel. The hot breadth of passionate oratory and the fiery proclamations of July brought no warmth in the frigid winds of December.

On 19 December, 1776  the Pennsylvania Journal printed an essay titled “American Crisis.”It began with: “These are the times that try men’s souls; the summer soldier and the sunshine patriot will in this crisis, shrink from the service of his country; but he that stands it now, deserves the love and thanks of man and woman. Tyranny like hell, is not easily conquered; yet we have this consolation with us, that the harder the conflict, the more glorious the triumph….” the author was Thomas Paine. Washington had the essay read to his hungry, shivering, dispirited soldiers.

Less than six months after the Declaration of Independence, the Revolution seemed to be on the verge of collapsing. The Continental Army had suffered a string of defeats and New York City had been abandoned to the British. Between September and December, 11,000 American troops quit the fight and returned to the comforts of home. On December 31, the service contracts of most of the remaining soldiers would expire. Washington’s army could melt away long before the spring thaw. Something dramatic was needed to save the revolution. George Washington, being the great man he was, rose to the occasion. On December 26, after crossing the Delaware River during the night, he attacked Hessian mercenaries working for the British, and he won a stunning victory in the little town of Trenton, New Jersey. It revived the spirit of the Revolution.

Now in this Christmas season of 2020, we have another American crisis. A dreaded apparition stalks the land like the Ghost of Christmas Yet to Come in A Christmas Carol. It is carrying a copy of the Communist Manifesto in the left hand and Mein Kampf in the right. There is a new aristocracy that seems to advocate a curious blending of Fascist economic policy with a Cultural Marxist internationalism. A new feudalism is looming, wherein, every four years the billionaire aristocracy will tell us whom they have chosen to be the new President. We are in a struggle to restore honest elections or lose them forever.

The State of Texas brought a lawsuit before the Supreme Court. The suit was against the four critical swing states of Georgia, Michigan, Pennsylvania, and Wisconsin. It argued that the election fraud committed in those states adversely affected Texas because it involved the Presidency that affects everyone in the country. It was supported by 20 other states including Pennsylvania, and 126 members of Congress. You would think, that would be enough to at least get the High Court to listen. But the Supreme Hotdogs hid under their desks and ruled that Texas had “no standing.” In layman’s language that means, we don’t want to hear your evidence. Don’t be a trouble maker. Go away. When he heard about the Supreme Court’s ruling, Mark Levin (a lawyer and Constitutional expert) remarked bitterly, “I don’t ever want to talk to a Supreme Court Justice again.” “What the hell good are they?”

Patriots must understand that the courts have not ruled against Trump lawsuits because there is no evidence. The evidence is valid and massive. With a few exceptions, what the courts have done was refuse to allow Trump to present his case. Apparently, they’ve hidden behind “no standing” to dodge the explosive issue of voter fraud.

The distinguished lawyer Sidney Powell has said, “People who say there is no evidence of voter fraud are lying through their teeth, willfully ignorant or blind to the truth. Frankly, they are part of the problem." "We have them destroying evidence right and left. In every county, everything from wiping machines to shredding ballots … All of these machines should have been impounded the day after the election and reviewed for forensic analysis.” “There is more than enough probable cause to impound every voting machine in the country.” (emphasis is mine).

Very late, six weeks after the election, the Arizona state Senate issued a subpoena to Maricopa County to turn over Dominion voting machines for a forensic audit. Its Board of Supervisors refused to comply with the subpoena. If the election was so honest why is there a problem? What are they hiding? Nothing suspicious there. No proof.

Under the weight of millions of fraudulent ballots, the legal system has collapsed. In general, it will not enforce the law when it goes against the ruling class, and that goes right to the very top. We now have a legal system that would be the pride of any banana republic.

We have already lost our country to a billionaire aristocracy that is above the law. In this winter of crisis, the question before us is: can we get it back again? Every peaceful effort to correct the massive election steal has been fought against and thwarted by every establishment institution. It appears that the only option left is for the people to reassert their power as the ultimate sovereign and veto this sham “election.”

We are the great majority; we need to graphically show our power. Power is the only thing the ruling class understands and responds to. 74 million Americans voted for Trump who won in a landslide. We demand to have the President we chose. If they shove Biden on us, it will be a wound that never heals. We are not going away. We are not going to shut up. Not ever.

President Trump is encouraging patriots to go to a mass rally in Washington DC on January 6th. That is when the electors’ votes will be finalized.