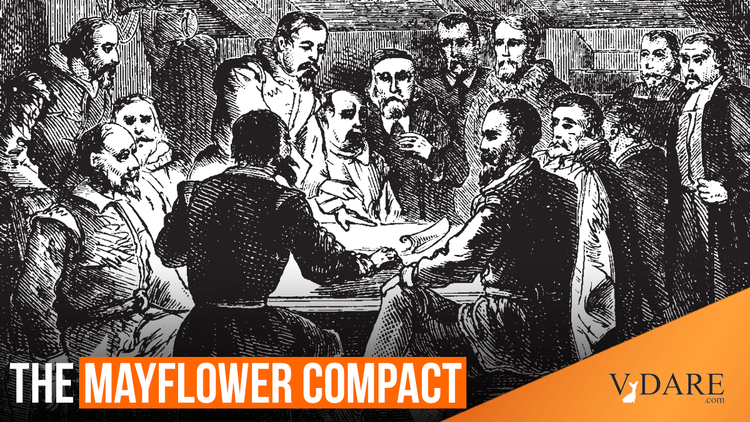 From: An Old-Stock DUTCH American  [Email him]
VDARE asked a short time ago for stories regarding Mayflower descendants and people who feel themselves to be assimilated into the Historic American nation that was founded by the pilgrims. My family came to this continent to the colony of New Netherlands in 1637- 17 years after the Mayflower, from Amersfoort, Holland to what was then Amersfoort, Long Island.
By the time of the revolution they were settled in Stone House Plains, now Bloomfield, NJ.  They resisted linguistic and religious assimilation but became thoroughly Americanized in all other ways, with a total loyalty to their neighbors and colony.  Below please find the story of how these simple Jersey Dutch farmers delayed the British army in 1776 and helped save the revolutionary cause.
How the Garrabrandt Family Delayed the British Army and Saved the Revolutionary Cause

Soon after the Continental Congress declared the Colonies’ freedom from Great Britain, Britain determined to crush the rebellion, sent a large fleet, along with more than 34,000 troops to New York. In August, British General Howe’s Redcoats routed the Continental Army on Long Island; our army was nearly surrounded in New York and Washington was forced to flee with his troops from New York City by September. The retreat from New York City was more of a panicked rout, with the American troops passing through Jersey City (then called Bergen).   A Garrabrandt relative, named Zabriskie, asked General Washington where the Continental Army was fleeing to.  Washington asked Zabriskie, ‘Can you keep a secret?”  Zabriskie answered, “Yes.”  Washington then responded, “So can I.” and left to lead the army west.  They were headed for Pennsylvania.

As the army retreated across Passaic County, some of the frightened soldiers came to the Garrabrandt farm in Stone House Plains (now Bloomfield New Jersey).  My ancestor, Garrabrandt Garrabrandt, learned from them that the bridge was still standing and that the British were getting close.  He called his family together and they got into their farm wagons.

The Garrabrandts, like most of the people in New Jersey north of Newark, were of Dutch ancestry.  They spoke Dutch and went to Dutch churches and since New Netherlands was taken by force by the English in 1664 they had no love for the English government and most of them were Patriots, like my family.  Garrabrandt Garrabrandt had a plan to help our army escape—he and his boys would make the bridge useless to the British, while saving it for use in the near future.

When they got to the Passaic River Bridge, there were no soldiers in sight.  The Americans had already run away and the British had not gotten there yet.  The Garrabrandt men and boys climbed down from their farm wagons and went to work.  It would have been easy for them to set the bridge on fire and then leave, but they were practical Dutch farmers, they did not want to see the bridge destroyed for nothing, so Garrabrandt gave them the instructions to start ripping up the floorboards of the bridge.  Without a floor a bridge is useless, but the floor can be replaced in a matter of days whereas building a new bridge would take a month or more.  Garrabrandt knew that the Continental Army only needed a day or two to escape to Pennsylvania, and that the British could never replace the floor in that time, so the Garrabrandt men went to work and ripped up all the floorboards.

They could not just leave the boards on the west side of the Passaic as the British could have sent swimmers across and just nailed them back down again—work of only a few hours, not enough time to let the American Army escape. So they loaded the boards onto their wagons and brought them back to Stone House Plains with them.

At Stone House Plains, they used the boards to build fences around some of their fields.  The wood was so strong, such fine hardwood, that a few of the fences, old and weathered, were still standing in the fields when I was a little boy and was shown them by my grandfather.

The British got to the Passaic River and found the floorless bridge.  They could look across, but could not march across.  The whole British Army had to stop and cut wood for boards.  It took them enough time that the American Army was able to get safely to Pennsylvania.  And that is how the Garrabrandt family saved the Continental Army and maybe the American Revolution.


Later Garrabrandt Garrabrandt served in Captain Speer’s Company in many battles, one of which was in Springfield, New Jersey.  His wife was granted a pension for his service in the Army, but his greatest service was when he and his family delayed the Brits that day in North Jersey at the Passaic River.