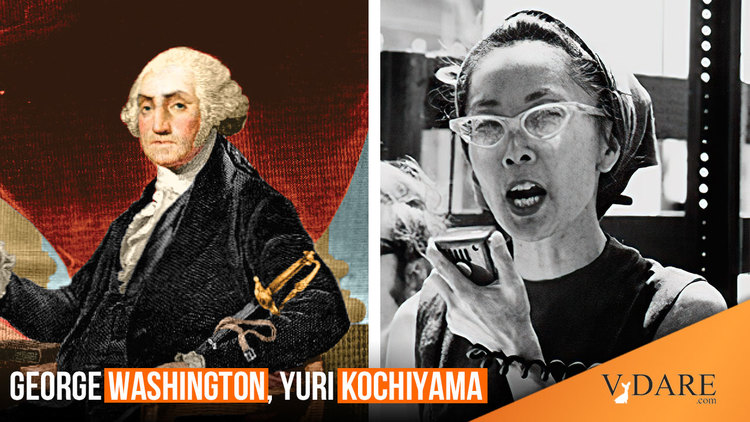 A Berkeley Reader Says Berkeley Is Renaming "Washington Elementary" For A Non-White Anti-American Activist...From A List Of Seven

This article in Berkeley's online local paper discusses the "controversy" over the brief removal of the name of Yuri Kochiyama, a Japanese-American social activist, from the short list of individuals to be chosen to replace George Washington ("a slave owner") at the school currently known as Washington Elementary. The intention, Superintendent Brent Stephens explained, was that “this city, with its progressive ideals and aspirations towards social justice, would not have a school named after a person who held human beings in bondage.” Mr. Stephens is himself black.

The other six currently under consideration as honorees are Mable Howard, Herb Wong, Maya Angelou, James Baldwin, Frances Albrier and Yoshiko Uchida.  The article notes that all are "in some way connected to civil rights or racial justice"; what is equally obvious but unmentioned is that none of them is white. Decrying the "erasure" indeed! And just who is getting erased?

Ms. Kochiyama, nominated by local activists Barnali Ghosh and Anirvan Chatterjee, was known for her radical politics, but they were a bit too much for some parents. However, her name was restored to the short list, which now numbers seven.

The Jefferson School in Berkeley was renamed Ruth Acty Elementary, after the school district’s first black teacher, in December 2020.

James Fulford writes: Most of these are local activists, who are anti-white but non-violent. Yuri Kochiyama, on the other hand, partnered with Malcolm X, Robert F. Williams,  "who gave Kochiyama her first copy of Chairman Mao's Little Red Book," supported the Viet Cong against America in protests, then secretly converted to Sunni Islam, going to a New York penitentiary to study with a Black Muslim convict who ran the place.

Murderers she was friend and supporter to included Peruvian Maoist guerrilla group Shining Path, Mumia Abu-Jamal, Assata Shakur, Marilyn Buck, the Puerto Ricans who opened fire in the House of Representatives in 1954, and most recently, in an interview in 2003, Osama Bin Laden:

"I consider Osama bin Laden as one of the people that I admire. To me, he is in the category of Malcolm X, Che Guevara, Patrice Lumumba, Fidel Castro ... I thank Islam for bin Laden. America's greed, aggressiveness, and self-righteous arrogance must be stopped."

Most of these activities are noted in the "Advocacy" section of her Wikipedia page. It's only the Osama stuff that's marked "Controversies."

But while she was obviously a very bad person, the other people being touted as a replacement for George Washington on the name of Berkeley school are also all non-white, anti-American activists...that's a requirement for being on the list.