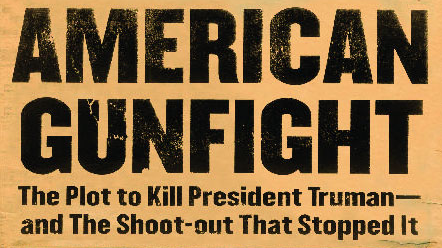 The Bush Administration's Invade-the-World-Invite-the-World strategy of throwing our weight around abroad while not bothering to secure the borders at home threatens to lead to some nasty blowback in the future.

In the past, a similar combination of policies—the conquest of Puerto Rico in 1898 combined with the opening of our borders to Puerto Rican immigrants in 1917—eventually brought about two of the most spectacular terrorist attacks in American history: 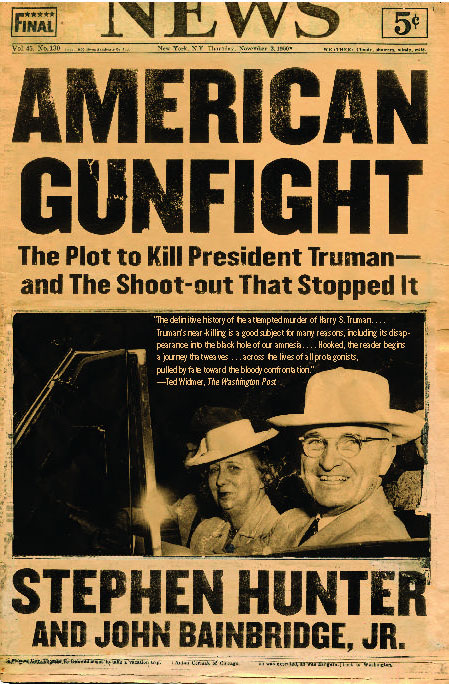 Both events have been largely forgotten, but the former is vividly brought back to life in the thrilling new nonfiction book American Gunfight: The Plot to Kill Harry Truman—and the Shoot-out that Stopped It by Stephen Hunter and John Bainbridge Jr.

As a film critic, I'm not quick to hand out compliments to my competitors. But I would be hard-pressed to argue that Stephen Hunter, who in 2003 became the first movie reviewer to win a Pulitzer Prize since Roger Ebert in 1975, isn't the best in the business.

Gunplay is one of the prime elements in American movies. Yet Hunter is unique among critics in knowing an enormous amount about firearms. We've all seen thousands of shoot-outs on screen. But American Gunfight's meticulous recreation of the battle that raged between the terrorists and seven Secret Service guards for 36 to 40 seconds in front of Blair House (Truman's temporary residence while the White House was being renovated) finally lets us understand what really happens when brave men fight to the death.

It's not like in the movies. Hunter and Bainbridge explain:

"Physiologically, the fighters have entered a zone that cannot be duplicated by man. It has to be real for you to get there: you feel nothing, you see only a little bit of what's ahead of you, you hear nothing. "Auditory exclusion" it's called: your hearing closes down. Meanwhile your fingers inflate like sausages and your IQ drops stunningly."

Yet, not one of the nine men that day even flinched.

The authors take care to dispel the comforting myths with which the two worst Puerto Rican terrorist attacks have become encrusted:

"Soon enough the two stories melded in the U.S. folk imagination under the rubric of stereotype: hot-tempered Latin revolutionaries, undisciplined, crazy even, pursuing a dream that made no sense at all, Puerto Rican independence."

Since November 22, 1963, we've become accustomed to assassins who are obvious defectives, little men who want to kill a big man so they too can go down in history.

But Hunter and Bainbridge show, though, that the two gunmen of 1950, Griselio Torresola and Oscar Collazo, were selfless and resourceful revolutionary cadres fighting for a cause much larger than their own egos.

The U.S. had gone to war with Spain in 1898 over its brutal attempts to put down the rebellion in its Cuban colony. Winning a crushing victory, America nobly gave Cuba its long-sought independence. But we held on to the smaller island of Puerto Rico to allow the U.S. Navy to guard the eastern approaches to what would become the Panama Canal.

In 1917, Congress voted to give all Puerto Ricans U.S. citizenship, in effect erasing the borders. Over the decades, according to Harvard economist George Borjas, about one-fourth of all Puerto Ricans moved to the United States. The influx only slowed after many federal welfare benefits were extended to the island.

In 1912, an American official had arranged a scholarship for the illegitimate mulatto son of a wealthy merchant and a poor woman of unstable mental health, Pedro Albizu Campos to attend college in America. The brilliant young man earned both a bachelor's degree and a law degree from Harvard.

The conventional wisdom assumes that exposure to America at its most welcoming and wealthiest turns foreign students into lifelong friends of our country. Instead, as so often happens, the homesick and resentful Albizu became our enemy. (This common psychological process is explored in detail in John Updike's remarkable novel The Coup.)

After his years studying in the cradle of American independence, the charismatic Albizu returned home to his beautiful island to speak out for Puerto Rican independence. He quickly became leader of the Nationalist Party. Why should this lovely land be ruled by foreigners speaking a harsh tongue when it could be ruled by an eloquent Spanish-speaker with, say, to pick a random example, two Harvard degrees?

When Albizu, "El Maestro" to his followers, failed to win election, he turned to militarism. After 16 of his Blackshirts were massacred in Ponce in 1937, Albizu was sentenced to ten years in the Atlanta federal prison.

It's easy for gringos to condescend toward the apparently lost cause of Puerto Rican nationalism. But both America and Puerto Rico might well be better off if America had let Puerto Rico go in 1898.

The Spanish-speaking island is to this day hardly part of the American nation culturally. For example, Puerto Rico sends a separate team to the Olympics. (In Athens in 2004, the Puerto Rican basketball team won a heroic 92-73 victory over the superstar-laden America team.)

Most likely Puerto Ricans enjoy better government under America's fairly benevolent thumb than it would if they ruled themselves. But that's a rather humiliating admission for a proud people to make.

And a strong case can be made that easy access to America and its welfare morally debilitated Puerto Ricans - who developed severe crime and drug problems in the U.S.

Finally, the constant movement back and forth of "Nuyoricans," with many yanking their children out of school to spend winters on the island and summers on the mainland, means that they take less responsibility for any single community.

While Albizu was in jail, the U.S. government began its expensive policy of buying Puerto Rican acquiescence with tax breaks to corporations that do business there. In the book Pay to the Order of Puerto Rico: The Cost of Dependence, economist Arthur Laffer and Alexander Odishelidze estimate that this now costs American taxpayers $22 billion annually.

After winning release, Albizu planned a coup in Puerto Rico for November 4, 1950. The assassination of President Truman was evidently scheduled for the next day to make the world take note of Puerto Rico nationalism.

The Puerto Rican cops, however, got wind of what was coming a week earlier. With their intentions exposed, Nationalist militants began an uncoordinated, premature uprising, highlighted by a bloody but futile assault by five commandos on the mansion of Gov. Luis Muñoz Marín on Oct. 30.

Policemen loyal to the Governor then laid siege to Albizu in his San Juan headquarters. In New York City, the numerous Puerto Rican Nationalists were distraught that their "Maximum Leader" was surrounded.

Hunter and Bainbridge explain why some Puerto Rican immigrants in 1950 were murderously ill-disposed toward their American hosts who were so kind as to give them "the jobs Americans won't do:"

"The New York, New York that's a hell of a town, where the Bronx was up and the Battery down, eluded [the immigrants], except via the bitter low rungs of the service economy… Jobs that somehow seem always to involve the glutinous secretions of life that human beings of a certain economic stature would prefer not to look upon or to acknowledge anymore… Let the Puerto Ricans deal with the reality of your biology. That's their place in the universe."

Thus, it's not surprising that the 2000 Puerto Rican Day Parade in New York was dedicated to Albizu, the man who ordered the murder of Harry Truman.

Two immigrant Nationalist operatives, Torresola and Collazo, apparently decided to move the assassination up five days and headed for Washington. This acceleration of the schedule probably kept it from succeeding—some say the original called for five gunmen, which should have been more than enough. Further, the pair only brought one pistol each. Having to pause to reload their German automatics under fire proved fatal.

Still, the strategy they improvised a few hours before their assault nearly worked:

"This plan was quite elegant… The whole point of the plan was to overcome the defenses with a stunning blast of firepower, disorient and dis-coordinate the response, then hunt the President down in Blair."

From opposite directions, they simultaneously approached the policemen on the sidewalk in front of the Presidential residence and shot them point blank, with Torresola putting three slugs in White House Policeman Leslie Coffelt, mortally wounding him. Torresola, an expert shot, then wounded two more guards, while his less skilled compatriot Collazo blasted away at the Secret Service agents at the other end of the sidewalk, who remained unaware of Torresalo's existence. Meanwhile, the agent inside Blair House struggled to unlock the cabinet holding a Tommy gun.

Awoken from his nap by gunfire, President Truman walked to his second floor window and stood looking out at the gunfight in stunned amazement, only 30 feet from where Torresola was reloading his Luger.

In this crisis, Coffelt, the only American in position to stop Torresola, stood up despite the three 9-mm rounds in him, staggered to within 20 feet of the terrorist, and, in "what has to be considered the most important shot ever taken by an American police officer," fired one perfectly aimed bullet into his head, killing Torresola instantly.

Coffelt then sat down and died.

Coming again - to an Empire near you?