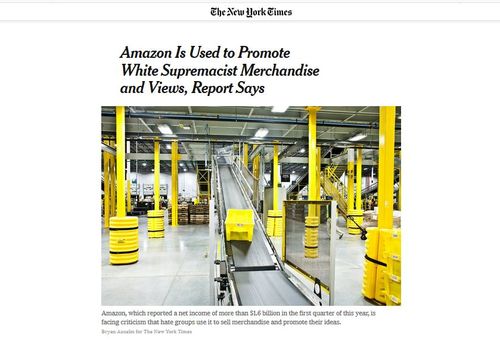 Pepe vs. Che: All T-Shirts Are Equal, But Some Are More Hateful Than Others

Amazon, which reported a net income of more than $1.6 billion in the first quarter of this year, is facing criticism that hate groups use it to sell merchandise and promote their ideas.

Two nonprofits are criticizing Amazon for allowing its platforms to spread white supremacy and racism, identifying in a report how shoppers can buy onesies for babies stamped with alt-right images, Nazi-themed action figures and anti-Semitic books and music.

The report, which was released on Friday by the Partnership for Working Families and the Action Center on Race and the Economy, said Amazon’s policies allow it to bar hateful or offensive merchandise and content, but the policies are “weak and inadequately enforced” and allow hate groups to “generate revenue, propagate their ideas and grow their movements.”

The report outlines a number of items available as of June, including a costume that makes it look as though wearers have marks around their neck from being hanged from a noose, and onesies for babies that include images of a burning cross emblazoned across the front and Pepe the Frog.

The report identified dozens of e-books being sold in Amazon Kindle formats that were published by groups labeled “hate organizations” by the Southern Poverty Law Center, which monitors extremist groups.

It also criticized Amazon’s CloudFront content delivery network for “facilitating the publication and distribution of digital media” associated with Islamophobia.

As of Sunday afternoon, Amazon appeared to have removed many of the items identified in the report but others, like a sword with Nazi symbols, remained.

“Either Amazon does not find the materials outlined in this report offensive or otherwise contrary to its policies, or it does not consistently enforce its own policies,” the report said. “Amazon has been reactive, not proactive, in its response to use of its site by peddlers of hate.”

In the report, the organizations asked Amazon to develop better policies for policing its platforms, destroy hateful merchandise in its warehouses and stop allowing such goods and content to be distributed through its services. …

Nationally, the number of reported anti-Semitic incidents surged 57 percent in 2017, up to 1,986 from 1,267 in the previous year, according to the Anti-Defamation League, which linked the increase to the divisive state of American politics, a rise of extremists and the effects of social media.

But not to that criminal in Israel who sent hundreds of highly publicized threats to Jewish centers in the USA. Who can remember all the way back to 2017?

In contrast, Amazon currently offers 220 Che Guevara T-shirts for sale. Here’s the first 40 of the 220: Because Che Guevara is a Good Guy.

(All those firing squads Che was in charge of? No doubt, the dead people were Bad Guys who got what was coming to them. How do we know? Because, like I said, Che Guevara is a Good Guy. If you can’t follow this sophisticated logic, try going to college for once in your ignorant life.)

In contrast, Pepe the Frog is a Bad Guy

(Only Bad Guys have follow-up questions to that.)