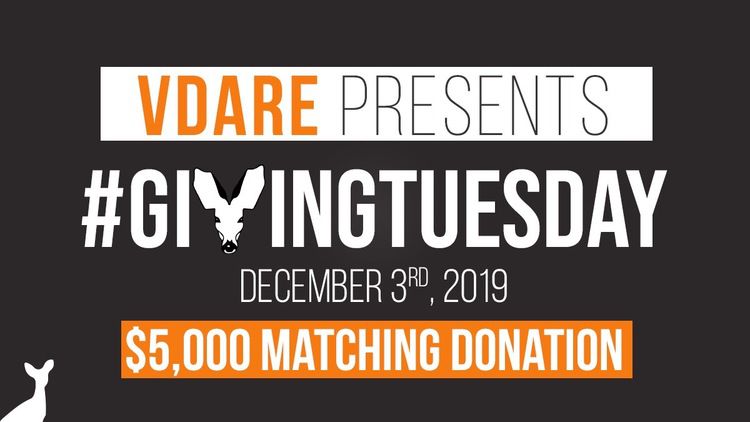 The Dissident Right, which includes immigration patriots, is finding its voice again for the first time since the tragic Unite The Right rally in 2017, and happily it’s developing right as VDARE.com prepares to celebrate our 20th year in operation.

As many of our readers already know, a cadre of young (mostly) men began showing up in the question lines at Turning Point USA’s college campus events this fall during the “Culture Wars” tour featuring TPUSA founder Charlie Kirk and others.

Of course the Main Stream Media said their aim was disruption. But instead of the vicious physical attacks, senseless destruction and the totalitarian worldview that characterizes “disruption” by the Left, these young men simply asked pointed questions focused on Christian morality, America First foreign policy and, most interesting to VDARE.com, immigration and demographic change. For more detail on the so-called Groyper War, see our video here.

Note that the Groypers are not the first hopeful uprising VDARE.com has seen in our 20 years as outspoken immigration patriots. We watched with delight as the Tea Party, the Ron Paul Revolution and the Alt-Right rebellions emerged, made their mark on the public debate, then faded. It’s tough to break into America’s tightly-controlled public debate.

But the Groyper movement is the most promising yet. They’re decentralized, disorganized, and amateur. They learn as they go, are agile and opportunistic. They are guerrilla warriors in the internecine fight for the heirs to Trumpism.

Is their youthful intellectual radicalism, which is largely online except where it has spilled out onto college campus events, just another leitmotif in the operatic drama of the Historic American Nation? So far, it’s difficult to tell.

Nick Fuentes, self-identified Groyper leader, said in a recent interview with The Hill:

“We have figured out the game. The algorithm. We’ve hacked the conversation where if you say sensational things like we do, you get attention. I don’t want it to be like that. I wish I could ascend with ideas.” [Conservatives seek to stifle new ‘alt right’ movement steeped in anti-Semitism, by Jonathan Easley, November 11, 2019]

And of course, he’s right. Sensationalism works. As VDARE.com Editor Peter Brimelow said in defense of Trump’s sensational behavior—the Left couldn’t have asked for a more educated gentleman than Enoch Powell or Pat Buchanan—or for that matter, Kris Kobach—to make the case for immigration patriotism. But our enemies don’t want gentleman, they want losers. And it’s the fighters that win.

My message to Groypers: once you ascend, VDARE.com has all the ideas you need! VDARE.com has spent twenty years honing our arguments, applying the best minds to quantifying the negative effects of mass immigration, the possible solutions to the destruction America, and speaking real truth to power. All of our archives are here for the taking. You don’t have to reinvent the wheel. We know you are reading, that you are learning. We’ve been waiting for you. Please. Take our archives and our expertise. Stand on our shoulders and we can take back America together.

Tucker Carlson said “We win if we are honest and positive. We lose if we are defensive and anxious.” By that measure, immigration patriots are winning. While the gatekeepers of the establishment flinch and lash out, deplatform and deceive, our ranks grow every day. For every political exile, for every dox, our network grows stronger.

Since its inception, VDARE.com has taken its place as the only website dedicated solely to patriotic immigration reform and the National Question. We are the voice of the Historic American Nation. We publish multiple posts a day covering the unsustainability of US immigration policy and a broad spectrum of related Politically Incorrect topics.

VDARE is the only institution to consistently provide a platform for America First principles, without blowing up or burning out. We’ve stood the test of time, and we’re getting bigger every day.

It’s a dirty job, and risky. We know what it’s like to be marginalized, hated and smeared. And in the internet age, being vocal about dissident political ideas is not a choice you make for yourself—it effects family and loved ones as well. And there are casualties. Looking back on VDARE.com’s twenty years in the fray, it is tempting to mark the passing of VDARE.com time from crisis to crisis, purge to purge. And there is some legitimacy to that: our battle scars are visible, and some of them are still raw.

And yet here we are— stronger than ever!

This year we’re also celebrating a significant milestone—our 20th anniversary. And we have many, many reasons to celebrate these first twenty years.

I’ve planned a number of special things starting now and carrying on through 2020. Noting how far we’ve come, highlighting a few of our favorite contributors, honoring the major achievements in the movement and inviting you, our readers, to look into the future with us.

We kick everything off on December 3, Giving Tuesday (the Tuesday after Thanksgiving) with our 2019 Year End Appeal. On that day, we have a $5,000 matching pledge from a wonderful donor who has stepped up to inspire you and people like you to support VDARE.com with him.

And to top it off, we have our annual VDARE.com “Open House” livestream featuring Peter Brimelow and John Derbyshire as they answer your questions and toast to the season, December 3, 8pm Eastern, at youtube.com/vdaretv.

Mark your calendars and tune in!

Last year at this time, I released the VDARE.com “Challenges Report,” [PDF] spelling out as succinctly as possible all the ways I saw our enemies closing in. Upon rereading now, all of those challenges remain. But one thing has changed: donors are giving more generously than ever.

Peter Brimelow frequently reminds us that miracles happen surprisingly often in politics. But I tell him political miracles are like Seneca’s luck: found at the intersection of preparation and opportunity.

VDARE.com has been preparing for two decades, and we won’t back down until we’ve won.

The opportunity is now.

Please give your most generous donation, starting on Giving Tuesday.