Will Islam Will Prove That Demographics Is Destiny?

Edward Dutton’s new book, Why Islam Makes You Stupid … But Also Means You’ll Conquer the World [Washington Summit Publishers, 2020], offers a frightening if interesting theory: Though rigorous adherence to Islam suppresses intelligence, the advantages conferred by ethnocentrism and fertility are so great that, in the everlasting conflict between the Islam and formerly Christian Europe, the former will triumph despite the intellectual and technological advantages of the latter. 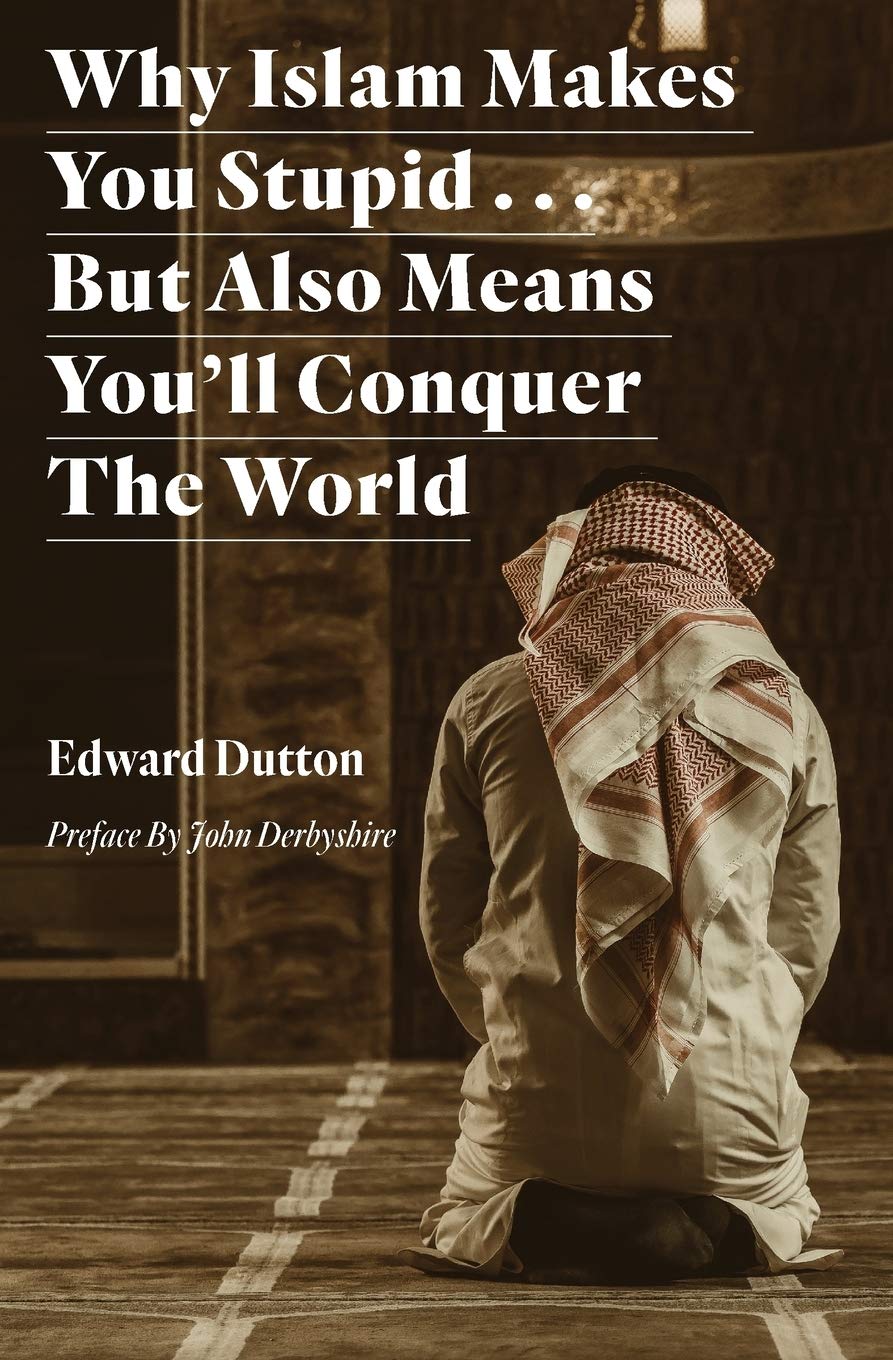 Dutton, in his usual resolute and confident style, packs his exploration of Islam with information and original insights to reveal how the religion affects the IQ not only of Muslims but also the Europeans whose lands Mohammed’s disciples are colonizing.

Chapter 6 closes the book with Dutton’s reflections of Western man’s future in light of the general deterioration of Western civilizational strength, the declining average intelligence of Europeans, and the accelerating immigration into the European heartlands of aliens in general and Muslims in particular.

But Dutton, originally educated as a theologian, is at his strongest in the middle when dealing with Islam’s stultifying effects on IQ—which will not, he predicts, thwart its triumph over the West.

Dutton reiterates Winston Churchill’s grim evaluation of Islam in his 1899 book on the Reconquest of Sudan, The River War:

How dreadful are the curses which Mohammedanism lays on its votaries! Besides the fanatical frenzy, which is as dangerous in a man as hydrophobia in a dog, there is this fearful fatalistic apathy. The effects are apparent in many countries. Improvident habits, slovenly systems of agriculture, sluggish methods of commerce, and insecurity of property exist wherever the followers of the Prophet rule or live. A degraded sensualism deprives this life of its grace and refinement; the next of its dignity and sanctity. The fact that in Mohammedan law every woman must belong to some man as his absolute property – either as a child, a wife, or a concubine – must delay the final extinction of slavery until the faith of Islam has ceased to be a great power among men. Individual Moslems may show splendid qualities. Thousands become the brave and loyal soldiers of the Queen: all know how to die: but the influence of the religion paralyses the social development of those who follow it. No stronger retrograde force exists in the world. Far from being moribund, Mohammedanism is a militant and proselytizing faith. It has already spread throughout Central Africa, raising fearless warriors at every step; and were it not that Christianity is sheltered in the strong arms of science, the science against which it had vainly struggled, the civilization of modern Europe might fall, as fell the civilization of ancient Rome. [The River War, 1st edition, v. 2, p. 248]

And in some sense even reprises Hilaire Belloc’s warning in The Great Heresies that Islam will “return to power.”

In Chapter 2, Dutton summarizes the interplay between intelligence and religiosity. Overall, there exists a weak negative correlation between IQ and religiosity, and the harsher and more fundamentalist the creed, the lower the average IQ of its adepts.

That might seem trivial, as professors of science or engineers are rarely ardent believers, but two existential threats arise from the association of IQ and religiousness and their effect on fertility. A positive correlation between religiousness and fertility is dysgenic in terms of IQ; i.e.,

Dutton describes at length the negative consequences for the economy and technological development of Islam. But the real import of that fact: More religious and less intelligent neighboring nations will achieve a demographic advantage over more intelligent states. This is abundantly clear from the “world’s most important graph.” 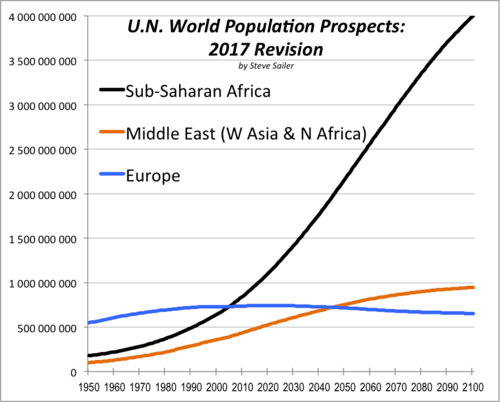 We see the consequences even now all around us.

Which brings us back to Churchill’s evaluation of Islam and Muslims. Those “retrograde” nations or region where Islam dominates have consistently lower average IQs than racially-similar non-Muslim neighbors, with significant negative correlations found between the number of Muslims and the average IQ. Dutton hypothesizes that Islamic religious and cultural practices are the explanation. Although the effects of environment on IQ are thought to be relatively small, the hypothesis is plausible. Data from different age groups support his hypothesis.

Dutton provides a brief history of religion, from the veneration of spirits in primitive, hunter-gatherer tribes to the necessarily universal moral God in crowded city-based civilizations. Then he lays out the history of Islam, with an emphasis on its earliest founding events. The simplicity which he explains Islam’s internecine and intertribal warfare, and the elegance with which he explains the power hierarchies in different Islamic sects, reveals the pen of a true master.

But what is it about Islam that depresses the intelligence of its adherents?

Dutton explains in Chapter 4: “The Five Pillars of Islam ... Faith, Prayer, Charity, Fasting, and making a pilgrimage to Mecca” do indeed induce stupidity. Intellectual achievement can hardly be expected from those trained to believe illogical and unsubstantiated dogmas, and the chronic stress linked to Islam’s difficult prayer and fasting regimes is not conducive to abstract thinking.

While Dutton tends to think that most of the “pillars” decrease intelligence, the reader will probably be more persuaded by the contribution of other important traditions explored in Chapter 5. Dutton suggests that the grisly practice of female genital mutilation (FGM), to which nearly 100 percent of women are subject in countries such as Somalia, is a traumatic childhood event that lowers not only the IQ of a woman, because trauma harms intelligence, but also the IQ of her children by reducing the level of intellectual stimulation she provides.

Dutton touches on polygamy, which he suggests is concomitantly eugenic and dysgenic: Women like high status men, and high status is achieved by intelligence. But the associated woman-shortage for lower status males leads to widespread pederasty, which traumatizes and dumbs down boys.

The last-but-certainly-not-least factor is widespread marriage between cousins. While strongly suppressing IQ, the resulting, tightly knit ethnocentric groups tend to be effective competitors for societal domination.

All this means that several aspects of Islam might contribute to the lower intelligence of Muslims. A detailed regional analysis of IQ, cousin marriage, and the strictness of religious practice should allow researchers to find out how genetic and environment affects intelligence in Islamic nations. Hopefully, we will see it done in the future.

Fortunately, Dutton’s book does not entirely live up to its provocative title—I’m not sure that Dutton proves that Islam will indeed “conquer the world.”

Yes, a young, fecund, masculine, and cohesive yet largely stupid civilization is invading and seems to be supplanting an old, intelligent, de-masculinized, hedonistic, and apathetic one.

The outcome seems to be certain.

Or is it? The West has faced worse before. It’s not yet over.

Vasily Tyorkin [Email him] is a pen name of a Russian neuroscientist living in Europe.