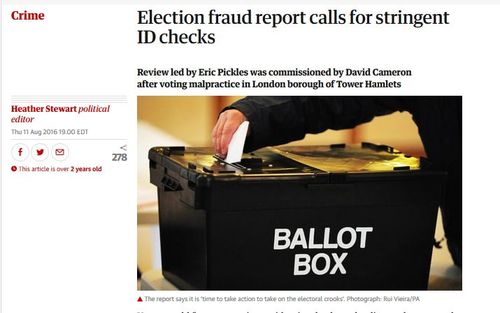 With a young researcher named Noah Carl being denounced by hundreds of academics demanding his firing for noticing, among other hatestats, the correlation in British elections between the number of allegations of electoral fraud in a district, the rate of cousin marriage in a district (which tends to be a proxy for enforced arranged marriages and male domination), and the size of the South Asian population, it is worth noting what iSteve commenters familiar with the election fraud issue in England have observed:

As far as I’m aware there are two related issues with electoral fraud in England. Firstly there is the actual practice of manipulating “postal votes” and secondly, and more insidiously,a lot of these family units are composed of UK-born males of Pakistani origin and their enslaved non-English-speaking immigrant wives who .. how to say this .. are not necessarily conversant with English democratic traditions.

Tony Blair’s government encouraged and allowed massive moslem immigration, and changed the voting laws, with the express intention of inviting election fraud in support of the Labour Party. This was clearly based on racist assumptions about Pakistanis and Bangladeshis; nobody made the slightest fuss about this racism at the time – or since. It’s also worth noting that having done all this Blair then launched aggressive wars against moslem countries – but then he is a bear of little brain.

For all the celebration in the UK of the centenary of votes for women, one aspect of the the abuse of postal voting is that many Muslim women are disenfranchised by their husbands. Needless to say, feminists and other SJWs really don’t give a s**t.

The problems with electoral fraud in the UK’s Pakistani and Bangladeshi communities are well known and have been widely reported. What is slightly remarkable is that an academic has attempted to analyse the phenomenon using statistical and social-science methods. Good for him – but his colleagues will make him pay for his blasphemy.

A commenter points to Ben Judah’s article on Bradford, England in Politico:

This is where I meet Ron McKay.

He is [MP George] Galloway’s close aide and “best friend” for 38 years. He is said to wield a lot of influence in Respect. He is from Glasgow, and has a puffy face.

I introduce myself as a POLITICO journalist and with his agreement begin recording the interview on my iPhone.

“It’s been a brutal, a brutal election campaign, and no doubt it will get worse,” he says, “It’s different, Bradford. This Bradford West election is different from any other election we’ve had.”

He soothes his brow, complaining he is tired.

How does the politics of Bradford work?

“It would take me much longer than I’ve got to explain biraderi politics in Bradford, clan-based politics, and people actually do deliver 20, 30, 50 votes. Through their extended families, what tends to happen is, the kind of head of the household, or the kind of head of the clan, makes a decision how they’ll vote. So if somebody, in I don’t know, Penge (South London) said I could deliver you 50 votes you would laugh. But here . . . it’s true. They deliver bundles of votes.” …

“The Pakistanis here,” says McKay, “by and large almost to a man and woman are from Mirpur, Azad Kashmir (the part of Kashmir administered by Pakistan) — so there’s an extensive family network, links, clan-based networks. In a way that doesn’t really apply elsewhere, that I can think of, not even in East London, where there’s Bangladeshis and they all come from Sylhet. It’s not to the same extent as it is here.”

“You have to understand the politics at work,” says McKay, “the mosques are very important, and the way the community operates religiously through the mosques, because Bradford West (is) probably 60 percent Asian, maybe higher. Much more so than in the other constituencies in Bradford. The Asians are by and large in this — in three or four wards.”

His tone is matter-of-fact anthropological.

Kashmiris and Bangladeshis are two of Britain’s least successful migrant groups. But both are remarkably well organized politically — and have captured local Labour party machines, becoming the new bloc votes in the ethnic neighborhoods of London, Birmingham and Bradford.

Galloway — who claims to be left-wing — thrives in Bradford’s biraderi clan-based politics.

His team does not hide its strategy.

“George is a hugely well-known politician who’s supported their causes, for 30 odd years, particularly Palestine,” says McKay, “Which is very close to this community’s heart, or the Muslim community’s heart. So he’s got a head start there, obviously. His record is very well known, in supporting causes that Muslims support against wars and imperialism. And there’s been a lot of house meetings and going to mosques.” …

“But to go back to the clan system,” says McKay, “What George and we did very successfully in the by-election is to some extent break that, through young people, and a kind of revolt of young people in being told who to vote for. It was huge, a tsunami of support, I’ve never seen anything like it.”

To take Bradford West in a by-election in 2012, Galloway beat the biraderi clan of Imran Hussein. This man is the scion of a Pakistani clan which dominated over the local branch of the Labour Party.

Galloway both appealed to the smaller clans cut out of the spoils, and to younger people, repressed by clan voting. He offered them both worlds: fun, street politics — and Muslim grievance. Imran Hussein and his clan were defeated.

… McKay tells me Galloway has now reconciled with this clan at Kashmir Day in the Pakistani Consulate. Accompanied by his father, Imran Hussein embraced Galloway three times.

McKay says the clan stills controls the Labour Party in Bradford West, and that this reconciliation was to stop Respect putting up a candidate in Bradford East, the neighboring seat where Hussein is trying to win election. …

I ask McKay: do you think this is no longer democracy?

“It is democracy as we know it. There’s still a secret ballot for those who aren’t filling in postal votes.”