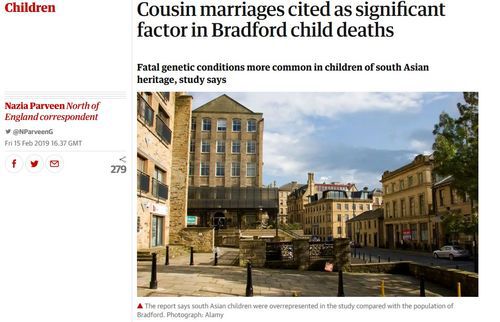 Marriage between cousins leading to fatal genetic conditions remain a factor in a significant proportion of child deaths in Bradford, according to a safeguarding report.

The report by the West Yorkshire city’s child death overview panel found that consanguineous relationships led to deaths from genetic and congenital abnormalities.

The report, published annually by Bradford children’s safeguarding board, reviewed 69 child deaths. These included 29 that occurred in 2017-18, 33 in 2016-17, and seven that took place in previous years.

More than two-thirds of these deaths, 67%, involved children under the age of one, most of whom died within 28 days.

Thirty of the 69 deaths (43%) were categorised as chromosomal, genetic and congenital anomalies, conditions that are more common in families with parents who are related.