Liberal publications are hypocrites about immigration, normally characterizing the influx of diversity into American communities as an entirely positive influence, while ignoring the appalling cultural practices of certain ethnicities and religions. Horrific crimes are reported, but they usually hang in the air with no cultural context provided to explain the motivation.

Today’s front page New York Times effort about female genital mutilation (FGM) is better than most, since the word “immigrant” is used, and more than once. It also mentions the specific nations where the savage behavior is most prevalent (i.e. Somalia, Guinea, Djibouti, Eritrea, Mali). 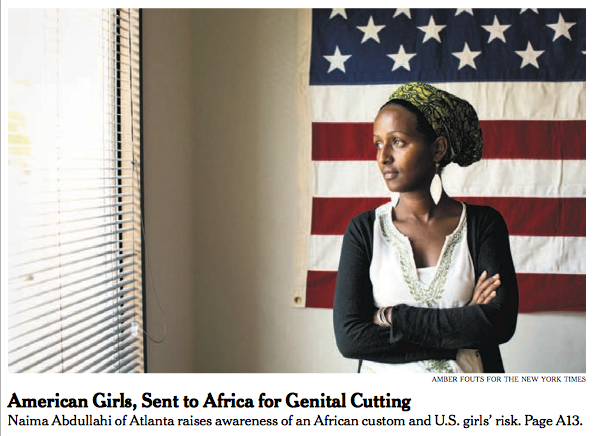 However being born in America doesn’t mean a person is culturally a part of this country, and being raised in a third-world family leaves some young people in the dark. Girls at risk for FGM (a federal crime) are unlikely to know how to get help.

Of course, the real question is why import such monstrous cultural norms via immigration in the first place? Leave the barbarians in their homelands where they can abuse one another away from civilization’s laws.

ATLANTA — Last summer, an American-born teenager of Somali descent fled her parents’ home in a suburb here after she discovered that a coming vacation to Somalia would include a sacred rite of passage: the cutting of her genitalia. In Guinea, a New Yorker escaped to the American Embassy after an aunt told her that her family trip would involve genital cutting. And in Seattle, at least one physician said parents had sent girls back to Somalia to undergo cutting.

Immigrant parents from African and other nations have long sent their daughters back to their ancestral homes for the summer, a trip intended to help them connect with their families and traditions.

During their stays, some girls are swept into bedrooms or backwoods and subjected to genital cutting in the belief that it will prevent promiscuity, ready them for marriage or otherwise align them with the ideals of their culture.

“Vacation cutting,” as the practice is deemed by those who oppose it, has existed in immigrant enclaves around the world for decades. Federal law has banned genital cutting in the United States since 1996, and last year it became illegal to transport girls for that purpose.

But some are concerned that such cutting could be on the rise. The number of African immigrants in the United States has more than quadrupled in the past two decades to almost 1.7 million, according to the Census Bureau. The growing numbers have brought new attention to the issue, and have spurred a small Internet-age, app-enabled support network of girls and women who have been victims of cutting, or believe they will be.

About 228,000 women and girls in the United States have been cut or are at risk of it, according to an analysis that uses 14-year-old census data.

At the center of this new network is Jaha Dukureh, 24, a Gambian immigrant who was cut twice, once as an infant in Gambia and again at age 15 in New York. A former Wells Fargo banker and a mother of three, she lives here in Atlanta. In February, she filed an online petition, urging President Obama to conduct a study of the issue.

She now fields hundreds of text messages, phone calls and social media messages a week from immigrants who want to talk about cutting but have never been able to do so.

Ms. Dukureh, who is college-educated and drives — unlike many of her immigrant friends — switches easily among the roles she has adopted in the past few months: caseworker, health educator, political strategist, media coordinator.

The questions she gets are both intimate and universal. “I have girls calling me who have been cut, asking: ‘Can I have sex? Will it hurt?’ ”

“No one is really talking about this in the U.S.,” she said. “No one knows. When I tell people what we are trying to do, people are in shock.”

Representatives Joseph Crowley of New York and Sheila Jackson Lee of Texas, both Democrats, have also spoken out on the issue. On Wednesday, they will deliver a letter to Congress and several federal agencies, requesting a national plan to study and address the cutting of American girls.

They suggest emulating efforts in Britain, which has established a help linefor potential victims, created passport inserts that explain the law regarding female cutting, and delivered repeated warnings to school staff members about the dangers of the practice.

In Atlanta, Ms. Dukureh connects daily with 16 girls in places across the country who share messages, videos and fiery self-authored poems using the app WhatsApp.

Mariam Camara, 22, and Haddiejatou Ceesay, 19, are the authors of “They took it!” It goes:

I had my female cut from me, my sensations stolen and discarded replaced with numbness and pain. My say in the matter? Negligible and disregarded.

I was told it was to cleanse me. Purify me, ensure my chastity till the day my husband took me at sunrise.

So they mutilated me, without second thoughts or anesthetics they cut me with razor sharp non-sterilized blades, they sliced me. They took it!

The tradition of female genital cutting is nearly nonexistent in many African and Middle Eastern cultures, but is deeply entrenched in others, and occurs primarily in 29 countries, according to the United Nations. The highest rates are in Somalia (98 percent of women are cut), Guinea (96 percent), Djibouti (93 percent), Eritrea (89 percent) and Mali (89 percent).

It can take many forms. Sometimes, a community member cuts just a portion of the clitoris. In the most extensive cases, the clitoris may be removed, the labia are sliced and brought together and a seal is created, leaving a small hole for urination and menstruation.

Unlike male circumcision, the practice has no health benefits. Occasionally, it is accompanied by an under-age marriage.

Its existence in the United States remains unknown to many American officials, clinicians, teachers and counselors. The reasons are twofold: Immigrant families rarely speak about it to outsiders, and outsiders, often unsure about how to approach the tradition of a foreign culture, do not know how to ask.

Those working to end cutting say that they seek to do so in a culturally sensitive way, recognizing the practice’s long history, and gently educating families about its consequences: immediate and long-term physical pain, complications during birth, loss of sexual feeling and mental health issues.

One goal, they say, is to dispel the falsehood that the tradition is supported by Islamic law.

“They think they’re doing their best for us,” said Naima Abdullahi, 37, a Kenyan-American who was cut at age 9 and now runs a support group in Atlanta for victims. ”It’s about engaging the community to talk. Why do we do these things?”

Another goal is to teach doctors how to treat women who have been cut.

The education process can be difficult. In some families, not being cut can limit a girl’s chances of marriage and isolate her from her community. Parents sometimes agree to a child’s cutting, even if they have reservations.

One African social worker living in New York explained that when she learned a 12-year-old client was headed to Mali this summer, she made repeated school visits to educate her about the consequences of genital cutting, plying her with notebooks and other small gifts.

“I’m like, ‘You know you’re going to get married, do you know what that means? Do you know what circumcision is?’ ” said the counselor, who asked that her name not be used so she could protect her client’s privacy. “And she’s like, ‘Yeah, they did it to everybody.’ I ask, ‘Do you think that’s what’s going to happen in Mali?’ And then she shut off. She’s like, ‘My mom told me not talk about that.’ ”

“The thing was,” the counselor continued, “if they don’t say that they want the help, we can’t do anything.”