America Edging Back To Segregation Lite—Led By Blacks.

[Adapted from the latest Radio Derb,[UPDATED WITH TRANSCRIPT] now available exclusively on VDARE.com.]

I'm going to bundle up three stories here, and hypothesize that perhaps they represent a trend: America is edging its way back to segregation—led by blacks.

First story. Last week I mentioned the excellent website CampusReform.org, which does great work exposing the absurdities of Political Correctness in our colleges. Here's another one from them, dated January 30th. Headline: Segregated dorms for males "who identify as Black" coming to UConn.

Why? Explanation from Dr Erik Hines [Email him] faculty director for the project, who is himself black:

African American males graduate at a lower rate than their peers … It is a space for African American men to, one, come together and validate their experiences that they may have on campus. Number two, it's also a space where they can have conversation and also talk with individuals who come from the same background who share the same experience.

Boy, I'm confused. Isn't the whole rationale for Diversity and Affirmative Action that it's enriching to be around people from different backgrounds with different experiences? Doesn't Dr Hines want these 43 black guys to get their enrichment experience?

It's true that the graduation rate for black men at UConn is only 54 percent, against a campus average of 82 percent. The parsimonious explanation for that is that when colleges admit any black person with a pulse just to fulfill their Affirmative Action quotas, they end up with a lot of people who can't handle college-level work.

Probably athletic scholarships have something to do with it, too. That's been the case since at least 1933, when Jesse Owens came up short on his high school transcript but was admitted to Ohio State anyway on the strength of, quote from William Baker's biography, "special tests."

Second story. A couple of weeks ago I suggested, jocularly of course, that the fuss about there not being enough blacks in the nominations for this year's Oscars could be settled by just having a separate Black Oscars.

Well, I was behind the curve on this one. Los Angeles Times, February 3rd, headline: There's talk about bringing back the Black Oscars.

The reporter here is a black person named Tre'vell Anderson That's Tre-apostrophe-vell, but I don't know how to pronounce the apostrophe. Is it a glottal stop, like in Arabic? Tre-'-vell? I don't know.

Anyway, Mr. or Ms. Anderson—from the photograph at right it could be either—let's say Mx. Anderson [email zir] tells us that from 1981 to 2007 there was an annual ceremony named the Tree of Life Awards, held at a swank hotel in Los Angeles right before the Academy Awards. It honored black people who had achieved something notable in the movie industry, and was informally known as the Black Oscars. Quote: "Winners received black and bronze carved statuettes."

So either the ones talking are fans of Radio Derb, or I am gifted with clairvoyance, or for once I managed to grab a corner of the zeitgeist's cloak as he, she, or it flew past me the other day.

Third story. Monday, February 8th, was New Year's Day on the traditional Chinese calendar. It's the first day of the Year of the Monkey. 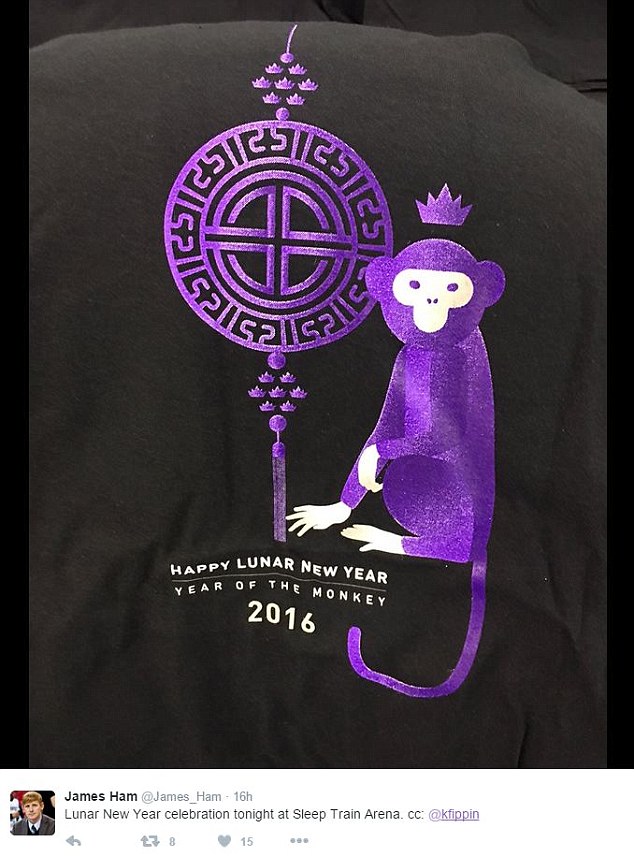 So on Monday, February 1st, the marketing people for the basketball team Sacramento Kings decided to distribute T-shirts with a monkey logo as a freebie for fans attending that night's home game. February 1st was, please note, the first day of Black History Month.

One of the players, DeMarcus Cousins, objected to the T-shirts as racist. He raised the alarm, and before you could say "microaggression" the shirts had all disappeared.

Chris Granger, the team's business President, who is of course a white guy, said: "We all need a lesson in sensitivity.” [Email him]

OK, those are my three stories. Here's my hypothesis:

American society is edging its way back, slowly and hesitantly, towards segregation.

Not legally enforced segregation, but a sort of segregation lite, where we all get our own "spaces," like those 43 students at the University of Connecticut.

This has already happened a lot, but always with the understanding that everyone but whites can have their own spaces and full access to everyone else's. You can live in a black residential dorm or in a dorm that's majority white. You can go to the Black Oscars and to the regular Oscars.

We can go to the regular Oscars, but there's no White Oscars just for us. We can live in a white-majority residential dorm, but we can't have an all-white dorm just for us.

But eventually, surely, white people are going to look at that black dorm and say:

OK, we're fine with it, and absolutely no offense to anyone; but can we now please have a white dorm?

As time goes on the sort of convoluted sociobabble answers you get to questions like that will sound less and less convincing.

And sooner or later the white guilt will all run out.

When that new arrangement has arrived, we shall need a name for it.

I suggest: "Freedom of Association.”