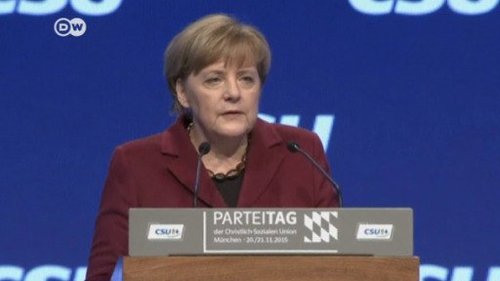 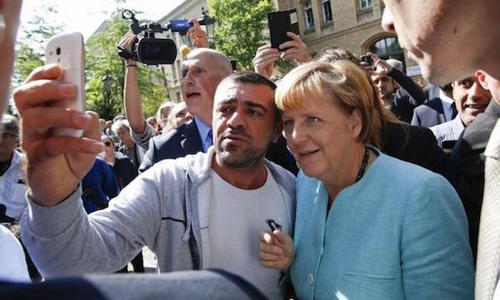 The first snow in Bavaria covered the tents sheltering thousands of illegal immigrants at the border between Austria and Germany as Angela Merkel showed up in Munich at the party congress of the Bavarian Christian Social Union (CSU), allied with her CDU (Christian Democratic Union). The atmosphere was not less frosty inside the hall, where the German Chancellor defended her policy of open doors for Muslim immigrants in front of a highly critical audience of Bavarian conservatives. [Chancellor Angela Merkel asks CSU party to stick with CDU allies in helping refugees, November 20, 2015]

Once again she repeated her mantra: Germany does not put any limit to the number of “refugees.” Her government instead would “fight against the reasons of their flight“, improve “the conditions in the refugee camps,” make sure that the whole of Europe would share the burden of caring for the “refugees“ and secure “the outer borders of the union“.

All these measures together would, supposedly, reduce the inflow of Syrians, Iraqis, Afghans and others to Germany—which in this year so far already exceeds one million.

Merkel tried to convince the auditorium that her government had everything under control and that there was “no alternative” to her policy of Open Doors. Her optimism was not shared by the CSU rank and file.

Bavaria is more affected by the invasion than any other region of Germany. The Bavarian PM and CSU head Horst Seehofer is well aware that he will be the first to pay the political price for the decisions taken in Berlin. Any support for the government depends first of all on stopping the mass influx, said Seehofer in Munich—challenging openly the Chancellor, who listened to his speech with a stony face.

Whenever Merkel appears in the streets she risks being booed, as happened in October in Stuttgart during a CDU rally. But this was the first time one of the most prominent Christian Democrats dared to lambaste her in public.

Thanks to its anti-immigration stand, the moderately rightist Alternative für Deutschland (AFD) is climbing in the polls and now ranks third after CDU/CSU and the Social Democrat SPD. It is particularly strong among the working class. The Christian Democrats, for the first time ever, have to fear the emergence of an alternative political force on the right.

Merkel´s “friendly face” policy to “migrants” threatens the very basis of the Christian Democratic hegemony. German taxpayers are beginning to understand that the millions of Euros spent on border controls over the past years have been a total waste of money. “We cannot close the borders,” Merkel says in language all too familiar to Americans, “if we construct a fence people will find other ways.” But, as Donald Trump has riposted, “if you think walls don’t work, all you have to do is ask Israel.“

Five years ago, before the mass invasion began to accelerate, Germany had a Muslim population of roughly 4 million, including 3 million of Turkish origin (immigrants from the 1960s plus their descendants) and 1 million from other countries, mostly Arabs. Islam was already the most numerous religious denomination among all “Germans with a migration background,” as immigrants are commonly called here. The German police listed at least 150 radical Muslims as potential terrorists.

With the sharp increase of immigration in the last two years, the Muslim population now exceeds 5 million, with the relative weight of Arabs augmented significantly. The police estimates that there are now 450 potential terrorists among them.

Thus Germany has witnessed under Merkel´s leadership not only an overall growth of the Muslim community, but also a shift towards ethnic groups that are particularly prone to radicalism and even more resistant to assimilation as the Turks. Until now there have been no ethnic riots in Germany like in the UK and France. But this peace will not last. It is only a question of time until the accumulated tensions in the parallel societies in and around the bigger cities will escalate into violence.

After 5 months of uncontrolled illegal mass invasion triggered by Merkel´s “friendly face,“ there are around 300,000 of unknown origin among the nearly 1 million immigrants. And nobody knows how many will still arrive. At least one of the Muslim killers in Paris passed the Balkan route with a faked passport.

The newspaper Die Welt reported recently an analysis done in the German Ministry of Home Affairs which simply expresses what an increasing number of German voters begin to understand: “We import Muslim extremism, Arab anti-Semitism, national and ethnic conflicts of other people. We import another concept of law and society.”[Sicherheitsexperten entsetzt über deutsche Politik, October 25, 2015 —Gatestone Institute translation]

The German police was prepared to secure the borders and to send back asylum seekers. But Merkel insisted on keeping the borders open. She refuses admit any link between mass migration and public security.

The Chancellor is supported by the Social Democrats, the Greens, the Churches, the Muslim community and the Leftist Establishment in the German Main Stream Media. Like her predecessor, the socialist Chancellor Gerhard Schröder, she is sensitive to the electoral power of the immigrants. Public TV and public broadcasting are on her side, partly because they depend on public money, partly because most of their journalists are Leftists. Talk show guests are in their overwhelming majority sympathetic towards Merkel´s policy. Conformism and political correctness dominate the public debate. The question whether it would not be better to block the invasion is invariably answered by a counter question: “Should our soldiers fire on those poor refugees?”

What is going on in Germany is nothing less than a revolution against common sense—and cultural suicide.

So nobody has an explanation of Angela Merkel. Has she been blackmailed? Has she been bribed? Has she gone mad? Is she intentionally destabilizing her country in the interest of a foreign power?

Her promise that the European partners would take care of the refugees has no real possibility of fulfillment. The burden will fall on the German taxpayers, and the working class.

And yet there is no change in sight. Merkel has nothing to fear from the Left, and she has no dangerous rivals in her own party because she got rid of them long ago.

There is a big difference between Mrs. Merkel and the long time Chancellor and CDU head Helmut Kohl. Kohl was a convinced Christian Democrat and a German patriot, deeply rooted in the conservative traditions of his country. Merkel has no principles. She sees the CDU as a mere vehicle and does not accept any ideological constraints. In the last 5 month, she has ignored the laws and the constitution of her own country as well as her European partners and international law.

She is a public danger—not only for Germany, but for Europe and the West as a whole.