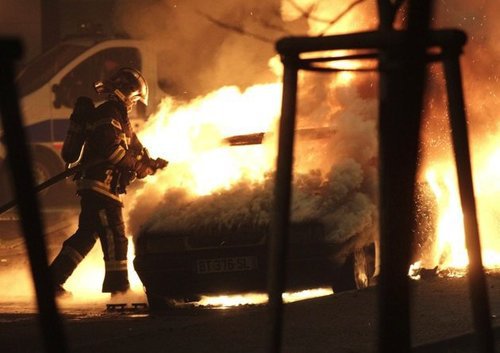 It was one decade ago today, October 27, that self-inflicted deaths by electrocution of two North African boys in Clichy-sous-Bois erupted into a three-week conflagration of riots across France. The violence resulted in three deaths of non-rioters, many police injuries and nearly 3000 arrests.

It was around that time that we became acquainted with the French immigrant custom of the mass arson of cars which is now a common New Year’s celebration among the diverse. The 2005 riots resulted in 8973 vehicles burned.

My blog item from five days into the 2005 riots noted that a police official described the situation as “civil war”: Is Paris Burning?

Now we hear that not a lot has changed in the banlieus, but the problem is the ideology and culture of the immigrant residents which the government cannot change, even with some nice urban renewal projects.

It doesn’t help that Clichy-sous-Bois has an unemployment rate of 23 percent as noted in the video following.

The Local’s report makes the situation sound dire, even after “hundreds of French nationals. . . left their lives in the poor suburbs to head off to join jihad in the Middle East.” Even so, the neighborhoods “are producing terrorists” according to MP Malek Boutih.

Ten years after France was forced to declare a state of emergency as youths rioted in poor suburbs across the country, many experts warn that the same scenario could easily erupt again.

The ten year anniversary of the outbreak that of fierce rioting, sparked by the death of two teenage boys, has prompted plenty of soul-searching in France.

But very little of the contemplation is offering up anything positive that has happened in the ten years since two teenage boys Zyed and Bouna died in Clichy-sous-Bois, despite various government initiatives and billions of euros spent over the years.

In fact the picture painted by many experts, politicians, socialists, and anti-racism groups is rather alarming.

Malek Boutih, an MP for the département of Essonne to the south of Paris and former head of SOS Racism, delivered a detailed report on the state of the suburbs, or banlieues as they are known in French, to the government earlier this summer.

“In 10 years, things have changed, in that the situation has worsened. It’s more difficult now than in the past,” Boutih told BFM TV this week.

“There’s been a decline that has set in in recent years that is approaching on the irreparable, because ten years on these suburbs are no longer producing rioters, they are producing terrorists.”

Boutih is referring to the likes of Said and Cherif Kouchi and Amed Coulibaly who were behind the Paris terrorist attacks and were raised in deprived neighbourhoods on the edge of the capital.

He’s also referring to the hundreds of French nationals who left their lives in poor suburbs to head off to join Jihad in the Middle East.

Boutih says government efforts to improve life in the suburbs have failed repeatedly because authorities haven’t understood the real issue.

“The economic aspect is not the heart of the problem, it’s a lot more vast,” he said.

Most experts agree that although governments have thrown plenty of money at the banlieues they have failed to target the real problems.

Mohemmed Mechmache founded the charity ACLEFEU (Collective association for Liberty, Equality, Fraternity, Together United) in the aftermath of the 2005 uprising in the hope giving citizens a voice.

He believes France’s failure to improve the lives of those who feel hopeless is why the banlieues are still not at peace.

“They still haven’t fixed the problem of schooling, of access to health, culture and public services as well as to training and jobs.

“All of these problems remain,” he told Le Figaro, adding that the issue of constant tensions between youths and police remains as well.

Discrimination around employment is still rife with many from poorer suburbs finding it tough to land a job, with potential employers turned off by the name or post code.

In a recent report by the country’s Economic Social and Environmental Council (CESE) that detailed the most significant problems facing France in 2015, the issue of the “isolated banlieues” featured prominently.

The CESE report says banlieues have become the “principal victims of the crisis and of the fragmentation of French Society.

”??Ten million French people live in these neighbourhoods. In some of the more deprived neighbourhoods the unemployment rate among young men is 45 percent. As a result many turn to crime to make a living.

The report also mentioned that the kind of inequalities than can be seen between the poor suburbs on the outskirts of Paris and the wealthier neighbourhoods in the centre of the capital is threatening France’s national cohesion.

“We see a reinforcement of the social and racial segregation,” said sociologist Didier Lapeyronnie.

And the rise of the far-right National Front (FN) in recent years has only added to the tensions and the sense of separation.

“The majority of youths in the suburbs believe no one is interested in them,” said the director of research at France’s CNRS think tank Laurent Mucchielli, who also believes the situation for those in poor neighbourhoods has worsened since 2005.

“And a minority develop a conspiracy theory that they are kept in this misery on purpose,” he told L’Express newspaper.

While the 2005 riots occurred under a centre-right government, many analysts suggest the election of the Socialist government in 2012 has actually added to the sense of frustration in the suburbs.

Many in the poorer neighbourhoods came out and voted for François Hollande after being seduced by his promise of change.

Yet the hope he offered them appears to only been replaced by yet more anger and resentment.

On a recent visit to La Courneuve, a working class banlieue to the north of Paris, Hollande appeared in denial, saying the “Republic had not left behind any neighbourhood”.

Yet he was booed with one onlooker shouting “When are things going to change?”

But Hollande’s government and especially his Prime Minister Manuel Valls appear acutely aware however that a repeat of the 2005 violence is indeed possible.

Valls has frequently spoken of “social and ethnic apartheid” that is afflicting France.

He said people face “social misery and discrimination on a daily basis due to having the wrong name, the wrong skin colour, or even simply for being a woman”.? ?”We cannot look for excuses – we have to look at the reality of France in the face.”

On Monday Valls headed out to the suburb of Mureaux in Yvelines along with several ministers where he promised “action”.

His plan is to focus on boosting equality and social diversity.

“I can’t stand to see this confinement… that in schools you only find students from poor families, who often have just one parent, all from immigrant families who have the same cultures and the same religion,” the Spanish-born premier said.??”How can we possibly manage?”

But until residents feel some kind of tangible change, the poor suburbs around France will remain smoldering with a dangerous cocktail of resentment, anger and hopelessness that might not need much to light the touch paper.