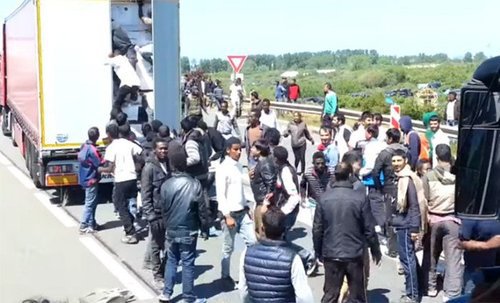 Now that Paul Ryan, with utter predictability, has given his AdelZuck/Donorist Paymasters a Budget Resolution which does nothing to restrain the Obamacrat No Borders policy and in fact facilitates continued immivasion including that of Syrian ‘refugees” it is timely to consider what the Germans have found out about their Syrians.

Basically they have found the newcomers are worthless to a sophisticated technologically-advanced economy like Germany’s.

Only 2% of Invaders Will Work The New Observer December 14, 2015 helpfully reviews several German-language studies coming to this dire conclusion:

According to an economist at the IfW, Dominik Groll, “…many will have no chance on the job market…An employment rate of two percent is consistent with the previous experience in Germany of immigrant integration programs, particularly from asylum seekers,”

Part of the problem is poor education:

The invaders’ low employment prospects were confirmed by Professor Ludger Wößmann, director of the Ifo Center for the Economics of Education in Munich.

In an interview with Die Zeit newspaper, he said that his research had shown that most of the invaders have a “miserable” education, and that at least two-thirds of them cannot even read or write.

Describing them as “functionally illiterate,” Professor Wößmann said…“They can only solve the simplest of arithmetic problems. This means that these students, even if they have learned German, will barely be able to follow a school curriculum.”

Unfortunately the fundamental problem is intractable as The New Observer laid out in IQ 93 Invaders will Wreck Germany October 27, 2015

Nonwhite invaders tested at Chemnitz University in Germany have average IQs of around 93 and this is going to cause “cognitive errors” with enormous consequences for the rest of society, one of that country’s leading psychology professors has warned….

Professor Heiner Rindermann, chair of Educational and Developmental Psychology at the Technical University of Chemnitz, has penned a penetrating article in the Focus Online German news service where he has spelled out the importance of IQ, culture, achievement, and its relationship to race.

Titled “Secondary School Level Engineers,” the article states unequivocally that the mass importation of low IQ nonwhite immigrants is going to lead to the destruction of Germany.

“The standard of education of most immigrants from Western Asia and Africa is low, and their capabilities are limited. The consequences of this will be bitter,” Professor Rindermann wrote.

…the majority of these “immigrants” have no qualifications at all. Even if they did...they would still be useless: All international university studies have shown that the average results obtained at the institutes of higher education in these countries average around 110 points less than similar institutions in Germany…

“The often mentioned problem of language is only a secondary factor. The basic skills weaknesses are much more serious and momentous. In school, these migrants will show on average a weaker performance and rarely achieve any high qualifications.”

There is no escaping the fact that the average IQ of a country’s population explains differential economic performance as J.P. Rushton laid out for us in I.Q.: Why Africa is Africa – and Haiti Haiti . Germany has no “magic dirt”. Middle Easterners in Germany will remain as economically ineffectual as they are in the Middle East.

It is easy to understand why the pro-Muslim anti white President Obama would want more of these people to swell the Democrat voter pool. But why would Angela Merkel want to so burden her country?

Ryan’s betrayal this week makes me even more confident of the conclusions in Merkel: Gone Mad—Or Bribed? GOP Example Suggests The Latter