Tuesday last week I had the satisfaction of casting a vote for Donald Trump. This was of course in the New York state Republican primary—a closed primary, in which only registered Republicans get to vote.

Some of you in the rest of the country, those great spaces west of the Hudson where the buffalo roam and the fierce Apaches pitch their tepees, may be surprised to learn that there are any Republicans at all in the state of Mrs. Clinton, Chuck Schumer, and Bill de Blasio. There are in fact plenty of us; one-third of our congressmen are Republicans. 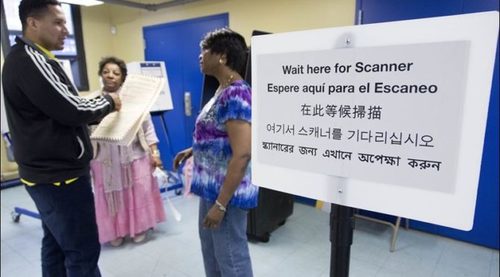 Watching the likes of Lindsey Graham, Mitch McConnell, and Paul Ryan this past couple of years, I have contemplated changing my party registration to Independent. Well, I'm glad I didn't. There was The Donald on the ballot sheet, along with Ted Cruz, John Kasich, and for some reason Ben Carson, right there in the gym at my local high school, the entrance to the polling place helpfully marked with a sign saying LUGAR DE VOTACION.

I filled in the circle, fed the sheet through the mark-scanner machine, exchanged a few courtesies with the election volunteers, and left with real satisfaction, having cast a presidential vote without gritted teeth for the first time ever.

If you were to waterboard me … [Clip: "They asked me, 'What do you think about waterboarding, Mr. Trump?' I said: 'I love it!'"]  Thank you, Sir. If you were to waterboard me, you might get me to admit that much of my pleasure in voting for Trump was of a negative kind, a faint echo of Genghis Khan's supposed remark that "The greatest joy for a man is to defeat his enemies, to drive them before him, to take from them all they possess, to see those they love in tears, to ride their horses, and to hold their wives and daughters in his arms." End quote. [Cackle.]

Not, please understand, that I have any fell designs on Mrs. Cruz or Mrs. Kasich, or on their husbands' horses. But for a patriotic conservative it has been joy indeed to watch the unpatriotic, un-conservative Republican Establishment thus brought low this election season.

There's an excitement, too, in being witness to, and in a tiny way participating in, an election that could very well be historic — a turning point.

It's an odd coincidence, to my mind, that we are having a controversy over removing the image of Andrew Jackson from our currency just as the Trump phenomenon has been happening. There are some interesting parallels between the seventh president and the first Donald. 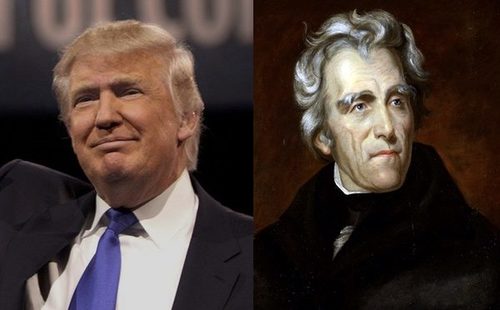 Trump inspires the same sort of disgust in our political Establishment that Jackson, a rough frontiersman, did among the Virginia gentry and the stuffed shirts of New England. Jackson's intelligence expressed itself in judgment rather than in analysis. "He had vigorous thoughts," as Benton put it, "but not the faculty of arranging them in a regular composition." … "He had never studied the niceties of language, said Taney" … "A man of the keenest and surest intuitions, in respect to men and measures, but with no power of reasoning out his conclusions, or of imparting them intellectually to other persons."

(That was Nathaniel Hawthorne, who by the way was a Jackson supporter)

There was also a Democratic Party primary. Results of the two primaries were a mix, good news and bad news.

So this is a real boost for Trump, not only for the GOP convention in July, but also for the general election in November, assuming the GOP Establishment hasn't figured out a way to lasso and hogtie him before then.

But Mrs. Clinton won her primary almost as decisively as Trump won his.

With key Democratic contests like this, I look for signs that the party's coalition is fraying. There has never been much logic to this alliance. How do blacks and homosexuals get in the same room, when blacks rather strongly disapprove of homosexuality? [Persistence of racial differences in attitudes toward homosexuality in the United States, Journal of Acquired Immune Deficiency Syndromes, December 2010] That's not even to mention Muslims, the Progressive alliance's new pet group. And why do some white men vote for a party that's explicitly anti-white and anti-male? And so on.

From the numbers I've seen out of the New York primary exit polling, there's not much sign of fraying. Hillary did do better with women than with men. She got 63 percent of the female vote, but split 50-50 with Bernie among men. Similarly with blacks—she got 75 percent of the black vote. 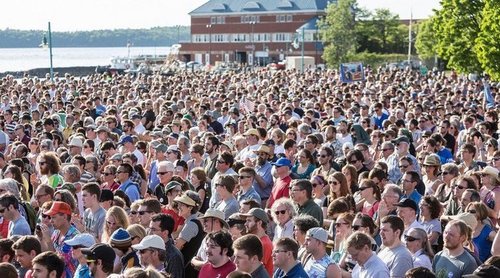 Sanders is notoriously the SWPL candidate and this does suggests possible Democrat torsion down the road. But not yet. Clinton split whites (who, interestingly, still cast 59% of the votes in the New York Democratic primary) 50-50 with Bernie. On present trends, white Leftist loonies will eventually find they are being outvoted by minority spoils-system racketeers. But they haven’t had to face this disturbing reality quite yet.

Hillary's biggest deficit was with the 18-29 age group. She lost them 35-65 to Bernie, but won all other age groups easily.

Youngsters just like unfiltered socialism. I'm not going to crow about that; I liked it too at their age.

We don't get much data on the homosexual vote. The New York primary exit polls didn't break it out.

The closest I can get is a blog post by the Audacious Epigone. He starts from an interview with Milo Yiannopolous, who argues that homosexuals are waking up to the fact that, quote, "the Left is not their friend. Pondering that, Audacious digs out some data from a Reuters poll matching up Mrs. Clinton with Donald Trump in a general election scenario. Of those homosexual respondents who declared a choice, 83 percent favored Hillary. That, as Audacious says, is even worse than the 76-22 Obama-Romney split among the shirt-lifters in 2012.

So Yiannopolous is whistling Dixie (so to speak). All in all, the Coalition of the Fringes is looking pretty solid.

Now Hillary has her party's nomination locked up, there's speculation about who her running mate will be. There's serious speculation, in fact, that this may be an all-girl ticket. John Podesta, Mrs. Clinton's campaign chairman, said on Wednesday that “We’ll start with a broad list and then begin to narrow it. But there is no question that there will be women on that list." [Women will be on Hillary Clinton’s vice president list, by Annie Linskey, Boston Globe, April 21, 2016]

"A broad list …" Get it? There will be broads on that list! Lefty squaw Elizabeth Warren is getting heap plenty mentions in this context, followed by the petite and extremely feminine former Arizona Governor and Open-Borders Enforcer Janet Napolitano.

So this could be a broad ticket. And if you'll forgive the pun, abroad is where you'll want to be if these screeching harpies take over the federal government.

Following Tuesday's result, Mrs. Clinton zipped over to Pennsylvania, a big one for her next Tuesday, with 189 delegates at stake. No, she doesn't need them at this point, but I refer you to that Genghis Khan quote in a previous segment. She wants to crush Bernie Sanders, to drive him before her, to take from him all he possesses, to ride his horses, etc.

So there she was in Philadelphia Wednesday, at a black church with black supremacist Eric Holder, playing the white guilt card. Sample quote: "We have to be honest about systemic racism and particularly the responsibility of white people, not just people in public life but all of us." [Hillary Tells Black Church White People Must End ‘Systemic Racism’, By Eric Pfeiffer, Daily Caller, April 20, 2016].

Yes, we must speak honestly about race, and encourage others to speak honestly. Then the counter-revolutionary wreckers will reveal themselves and we can hound them out of their jobs!

I don't have the stomach to watch an actual clip of the event, but presumably the lady put on her black voice for the occasion.

Unfortunately her command of Ebonics is less than fluent. Blacks apparently have a phrase: "ride or die." When a black woman says she will "ride or die" for her man, that means she will stick with him no matter what.

Well, there was a group at this event called The Mothers of the Movement: black women whose relatives have been shot by the police — while attacking the police, of course, or committing other crimes — or whose relatives died in police custody, like the lady in Texas who hanged herself in a police cell. [Ex-Texas cop charged in Sandra Bland’s death pleads not guilty in court appearance as he’s greeted by two dozen protesters , AP, March 22, 2016]  One of these women told Mrs. Clinton she expects the candidate to "ride or die" for her.

Responded Hillary: "I think that these women are asking us all to ride and die."

You're not supposed to die unless prevented somehow from riding—perhaps because the party of the second part has ridden off without you, leaving you behind with the three kids he fathered on you.