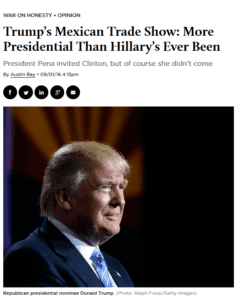 How about that Donald Trump, eh? Our man pulled off two—count 'em, two—big political moves in one day this week. He went to Mexico and met with that country's President as an apparent equal, and he then hopped over to Arizona and gave a fine thundering speech on immigration, packed with policy specifics.

The policy specifics of that speech were presented as ten bullet points. Executive summary:

This speech could almost have been written by us here at VDARE.com. I'll get back to that "almost" in just a minute.

But first I'm just going to bask a while in the warm, wonderful glow of hearing a serious presidential candidate talk about immigration as a policy—not a moral obligation, not an advertisement to the world of our profound national beneficence, not a key founding principle of our Republic (which it never was), not a tune played with the mystic chords of memory on a grand church organ—just a policy, to be worked out and implemented for the best interests of us, the American people.

And it wasn't just we knuckle-dragging Neanderthals on the Alt-Right who liked the speech, either. National Review's Rich Lowry [Email him] a voice for the genteel Right, praised it, though with minor qualifications:

This was the soundest immigration speech ever delivered by a presidential nominee, and a total policy victory for restrictionists.

Hey, when was the last time that Pat Buchanan and the editor of National Review agreed about something?

OK, I said that the Phoenix speech "could almost have been written by us here at VDARE.com." Let me just cover the "almost."

There are two parts to my "almost"—two expressions that didn't show up in the speech. Don't bother to check with a Ctrl-F on the transcript; I already did:

The Birthright Citizenship issue is a major leak below the waterline for any policy to control illegal immigration. You come here illegally; you marry and have a child; the child is a U.S. citizen. He is now your conduit into the publicly-funded welfare and educational systems. You can't deny those services to a citizen.

Then, after eighteen years pass, your child can sponsor you for citizenship. What, are you going to deny citizenship to the parents of a citizen?

As a matter of fact, I personally would; but I don't think it would play well politically or in the courts.

We have to end this boondoggle, as other nations have done. Why didn't Trump raise it?

For sound strategic reasons, I believe. There is nothing directly that a U.S. President can do about Birthright Citizenship. It rests on jurisprudence—on an interpretation of the Fourteenth Amendment, whose framers surely did not have illegal immigration in mind. All a President can do about it is lobby Congress for some clarifying legislation, and promote judges who seem hostile to the current interpretation.

Since this is a zone where the Executive can't actually do much, Trump left it out of a speech stressing Executive authority and action. Strategically, that is probably sound. But the issue must be confronted sooner or later if we're to have a rational immigration system.

And then, "moratorium." One of the most heartening things about the Phoenix speech was its reference to reforming legal immigration, which badly needs reforming. If you don't know how badly, get a copy of Michelle Malkin and John Miano's book Sold Out, which spells out the folly and corruption of our current legal immigration system in grisly detail.

The reform we would prefer begins with a moratorium. The U.S.A. has all the people it needs. There is no reason to accept any new settlements.

As always, there are sensible exceptions: foreign spouses and children of U.S. citizens; accredited geniuses at the Einstein level; foreigners who've put their lives on the line for U.S. interests; brave dissidents under serious persecution by governments hostile to us; maybe one or two other categories. That get us a few thousand a year, as against the million-plus legal immigrants and half-million-plus illegals we currently take.

This one I think Trump should have mentioned. For one thing, a blanket moratorium kills stone dead all the lobbying and pleading by special groups claiming priority on settlement. It means a major de-politicization of the immigration issue. What's not to like about that?

For another thing, the one word "moratorium" handily encapsulates a good policy on legal immigration: that we have all the people we need, and should get to work assimilating the Great Wave of the past fifty years, as we assimilated the 19th-century Great Wave after the restrictive 1924 Act.

It's de-politicizing; it's straightforward; people can understand it; and there's a one-word summary for people to know it by, right there: "moratorium." I regret Trump didn't find room for it.

Those quibbles aside, I join in the general applause for the speech, along with Pat Buchanan, Rich Lowry, and immigration patriots everywhere. Go Trump!

Three follow-ups to that.

It has a downside, though. I'm going to quote from my old boss Rich Lowry’s column again here, if you don't mind:

If Trump loses, this agenda will be discredited and restrictionists will instantly be as embattled as ever, once again fighting a desperate rear-guard action against a political establishment and opinion elite that considers its priorities bizarre and hateful.

I'm sure that's right. Donald Trump's campaign and patriotic immigration reform are now fused as a single biological entity. If the one goes down, so does the other. The stakes in this election just got a lot higher.

If Trump loses, it won't just be back to square one; it'll be back to square negative fifteen. A triumphant Democrat will claim a mandate for truly Open Borders and unlimited settlement. Hispanic supremacists in Congress and the media—people like Luis Gutierrez and Jorge Ramos—will be massively energized. Treason Lobby businessmen like Mark Zuckerberg and the Koch brothers will be throwing banquets for their congressional stooges. We immigration patriots will be eating dirt.

No, we won't quit. We shall recall our Kipling:

If you can meet with Triumph and Disaster

And treat those two imposters just the same;

If you can bear to hear the truth you've spoken

Twisted by knaves to make a trap for fools,

Or watch the things you gave your life to, broken,

And stoop and build 'em up with worn-out tools …

We'll stoop and rebuild, with worn-out tools, if we have to.

We'd rather not have to, though, so after the Phoenix speech, it is more than ever important to get Donald Trump elected. I shall do anything I can think of to help. I urge Radio Derb listeners to make the same resolution.

The piece is typically cautious and equalitarian, as it has to be in a neocon outlet, but it's a good reference point for Mexico's own attitude to illegal immigration. Sample quotes:

Mexico has zero tolerance for illegal immigrants who seek to work inside Mexico, happen to break Mexican law or go on public assistance—or any citizens who aid them …

In Mexico, legal immigration is aimed at … denying entry to those who are not healthy or would upset the, quote, "equilibrium of the national demographics."

Idea for a future Trump speech on immigration (the next time he's invited to Mexico, perhaps): Take a leaf from Prof. Hanson's column. Insert a few barbed quotes from Mexico's own immigration laws. 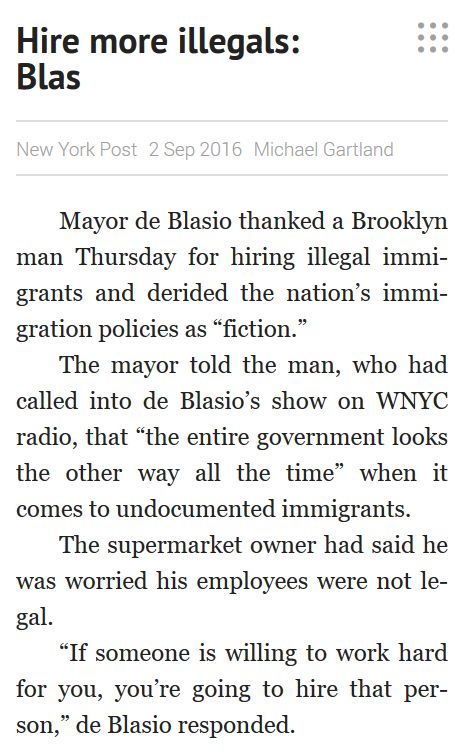 Like the viper in Aesop, though, they just can't help themselves. They keep blurting out their contempt for our immigration laws.

This is the authentic voice of the elites. Readers, they hate us.