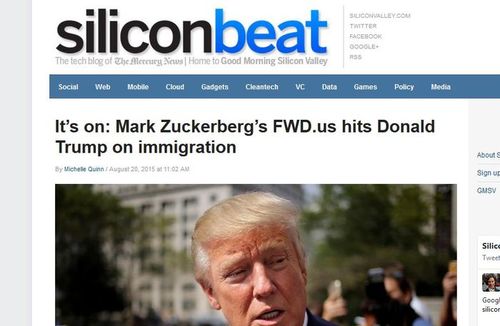 Zuckerberg's FWD.us has escalated the war against Trump with a sob story statement saying "Here's What Mass Deportation Would Mean".  (Apparently it would "would rip apart American (sic) families and collapse our economy".)

The article reporting this, from an industry website, and read mostly by people in the tech industry, has 669 comments so far. Virtually all of them  hate Zuckerberg. See It’s on: Mark Zuckerberg’s FWD.us hits Donald Trump on immigration, By Michelle Quinn, Silicon Beat, August 20, 2015

I doubt that any businessman has ever been hated as much as people hate Zuckerberg. He has virtually rehabilitated Bill Gates.