Grace & Steel Podcast Roundup: George Soros: The Face Of Evil; Freedom Of Assembly: Use It Or Lose It; P.S. Mangan On Health

Episode 81 of my podcast is now posted here (with copious links) and on YouTube.

My co-host Kevin and I discuss George Soros, the IRL Ernst Stavro Blofeld. Like the James Bond supervillain, Soros boasts a murky and compelling origin story and an insatiable desire to create havoc worldwide. He does not live in a hollowed-out volcano, but he is more powerful than almost any government on earth. As I like to say, it is hard to see where Soros ends and the U.S. government begins—and vice versa.

Soros was born in Budapest, and his native city is the nexus of the resistance to his quest for world domination. The Hungarian government, led by Prime Minister Viktor Orbán, is determined to bring Soros’s Central European University to heel. Curiously, the Rector of CEU is a Canadian, Michael Ignatieff, erstwhile leader of the Liberal Party. Ignatieff’s quest to become prime minister of Canada was thwarted by a clever Conservative campaign slogan, “Just Visiting.” This insult referred to the fact that he had spent most of his life outside Canada (in Britain and America) and would likely leave again. Which is precisely what he did, moving first to Harvard and then to Budapest. 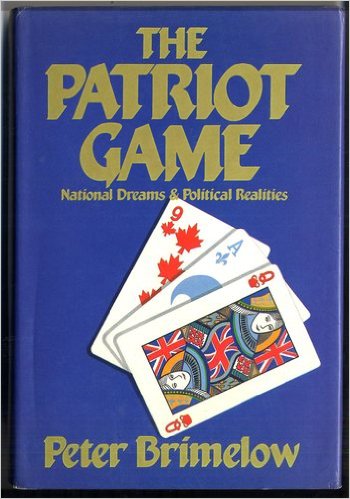 Long-time Liberal Party hack Chaviva Hošek (a native of Czechoslovakia) is a CEU trustee, and the propaganda war in favor of Soros and against Orbán is led by Anna Porter, who was born in Budapest and who, 31 years ago, published Peter Brimelow’s The Patriot Game.

Soros is globalism personified. His great appeal is to those with no fixed national loyalties, those who consider themselves citoyens du monde. Unfortunately, this category includes most of the Western world’s elite and elected representatives. Globalism, however, has little popular support, and the “de-Sorosization” (as former Macedonian prime minister Nikola Gruevski calls it) of the world has begun in earnest in Eastern Europe and Russia. In the meantime, my advice to President Trump is to have his people identify all NGOs that receive federal funding, directly or indirectly, and zero them out.

Episode 80 (posted here with links and here on YouTube) is called “Taking Back The Town Square.”

Freedom of assembly is in grave danger in America. There is no doubt that if Hillary Clinton had won the election, her Justice Department would be working overtime to suppress it (and free speech), while her remade Supreme Court would shortly gut the First Amendment.

Positive rights are of little utility when there is no will to protect them. If you want to know how that works out in practice, look to Canada. Sorry to go back to that well yet again, but there is seemingly no end to the ways in which my country constitutes a dread warning to yours.

Section 2 of the Charter of Rights guarantees Canadians freedom of speech, assembly and association. These rights, however, are subject to constraints. As the Government of Canada explains:

The Charter guarantees broad equality rights as well as fundamental freedoms, democratic rights, mobility rights, legal rights and language rights. It applies to all government action, meaning to the provincial legislatures and Parliament, and to everything done under their authority. This means that governments must take the Charter into account in developing all laws and policies.

However, the Charter also recognizes that even in a democracy, rights and freedoms are not absolute. For instance, freedom of expression is guaranteed, but no one is free to yell “fire” in a crowded theatre or to spread hate propaganda. Therefore, federal or a provincial legislature can limit fundamental rights, but only if that government can show that the limit is reasonable, is prescribed by law, and can be justified in a free and democratic society. The interests of society must be balanced against the interests of individuals to see if limits on individual rights can be justified.

We call our tyranny “Peace, order and good government.” Americans would do well to memorize the two paragraphs quoted above because they demonstrate the means whereby the rights your ancestors fought for at Yorktown and Saratoga will be taken from you. In Canada, free speech equals hate speech, while free assembly equals crying “fire” in a crowded theater. So cowed have the Canadian people become that a Based Stick Man would be unthinkable here. The caged bird sings because he’s Canadian. Don’t let this happen to you.

Episode 79 (posted here with links and here on YouTube) is a change of pace, my interview with health and fitness author P.D. Mangan.

In a half-dozen books published on Amazon, Dennis explains that pretty much everything the experts have told you about what to eat and how to exercise is wrong. Specifically,

When I asked Dennis where people should begin with better nutrition, he replied, “Cut out the junk: sugar, vegetable oils, refined flour and carbohydrates.”

Finally, the 2Kevins have launched a Patreon campaign. We have four books on the go—two annotated eBooks of existing titles, a novel and a monograph about the collapse of popular music—and we need your support to complete and publish them. Right-wingers love to complain that the MSM won’t publish People Like Us. Well, we’ve decided to do something about that—in deeds, not just in words. You can read our prospectus here, and you can watch a short video here.