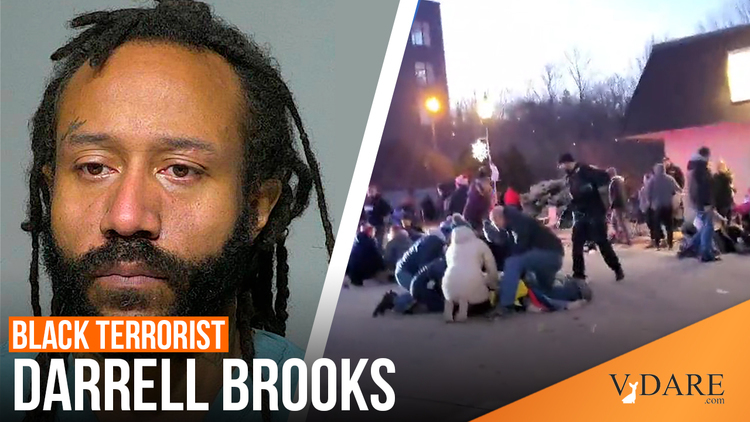 I dare you to look, with a clear and unfiltered lens, at the bloody nightmare we once called the United States of America.

Connect the dots. Contemplate the utter chaos in every major city while Black Lives Matter militants, academics and bureaucrats prattle on about "systemic racism" and "two-tiered justice." It's about much more than the horrific mass murders and attempted murders in Waukesha, Wisconsin, where the annual Christmas parade will now forever be stained by the wanton acts of alleged killer Darrell Brooks—a convicted sex offender and domestic abuser who sailed through George Soros–funded Milwaukee County District Attorney John Chisholm's soft-on-black crime revolving door like a Six Flags season pass holder.

Look at Philadelphia, home to another Soros-funded DA, where four black teenage girls beat the stuffing out of a group of Asian students on a SEPTA train in broad daylight last week. The lead aggressor, a hulking female in a hijab, brutally punished one Asian girl for asking her to stop harassing her friends. Viral video shows how Ms. Islam-Is-Peace tackled the intervener to the ground and beat her over the head with her shoe and clenched fists. Not a single adult intervened.

Un-prosecutor Larry Krasner, who campaigned on "restorative justice" policies to protect black teenage criminals from prison sentences, has now filed "ethnic intimidation" charges against the SEPTA gangsters. But who would he have believed if there had not been video? And what would he have done if the victims were white?

The mother of the profanity-spewing brute told NBC10:

"My daughter did not mean it. When she gets the opportunity to, she will give a sincere apology. ... As you can clearly see in the video, my daughter is Muslim. We do not carry ourselves that way. We carry ourselves with respect, modesty and humility."

Where have I heard that before? Ah, yes. The "that's not who my daughter is" defense was most recently invoked by former NBA player Corey Benjamin, whose little thugette was caught on video just a few weeks ago in Garden Grove, California, sucker-punching an Asian girl at a basketball game. The black girl's mom goaded her daughter from the sidelines and jeered, "Go and hit her."

Papa Benjamin claimed he was "shocked and disappointed at my daughter's behavior as this is not a reflection of the values and standards that my family holds." Never mind that Mama incited the violence or that the boxing Benjamin had assaulted two other female basketball players just weeks prior.

But this is not who they are. And it's never their fault.

Look at the living hellhole of New York City, where homeless lunatics push random strangers off subway platforms, repeat offenders rob and beat pedestrians on their way to work, and druggies urinate, defecate and fornicate openly on once-safe tourist thoroughfares.

Look at Oak Brook, Illinois, just outside woke-hijacked Chicago, where mobs of diverse thieves carted off $120,000 from a Louis Vuitton store on Wednesday afternoon.

Look at Walnut Creek, California, where roving bands of black-clad gangs absconded with $200,000 worth of merchandise from Nordstrom. Similar crime rings hit luxury stores in Hayward, San Jose, and Los Angeles. We are all supposed to pretend we can't discern the race of the criminals so "experts" can castigate us for using racist terms like "looting" to describe...looting.

We are hectored repeatedly by the Biden administration that "white supremacy" is the root of all this country's problems. CNN reported as "news" this week that "there's nothing more frightening in America today than an angry White man." Systemic racism and two-tiered justice won't allow black criminals to get a fair shake, we are propagandized over and over—even as a new catch-and-release carousel-riding Darrell Brooks emerges with numbing regularity by the week or day.

The scourge of Soros DAs has ushered in nothing but misery, filth and death across the ravaged plain in the name of social justice, but if we just tear down one more Thomas Jefferson statue, strip away one more Confederate general's name off a military base and toss another trillion or two or 10 or 20 at "diversity, inclusion and equity" initiatives to make white people atone for their alleged sins, peace and harmony will prevail.

Fraud upon fraud upon fraud. How many more innocent Dancing Grannies and schoolchildren have to die for the Big Lies? When will more good people stop reflexively cringing in the face of accusations of "racism" and call out the racist system of two-tiered justice that is actually bringing America to its knees?