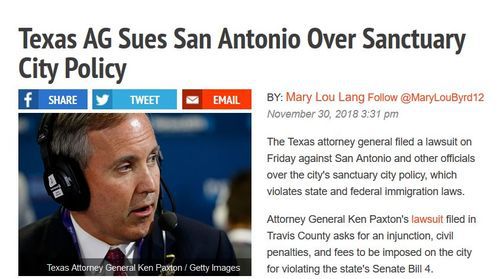 There is a new front on the immigration wars, and again, the Texas Attorney General, Ken Paxton, who should be the next U.S. Attorney General and led the way on ending DACA, is leading the way on prosecuting sanctuary cities and alien smugglers.

Sadly though, this is because the Department of Justice under the failed Attorney General Jeff Sessions and the execrable Lady DACA, the Deep State saboteur Kirstjen Nielsen, have deliberately refused to prosecute the large network of government officials, education bureaucrats, and others who aid and abet illegal aliens.

Not too long ago, the Chief of Police of San Antonio was involved in an alien smuggling incident that was intercepted by the San Antonio Police Department.  Instead of detaining the illegal aliens for arrest by U.S. Immigration and Customs Enforcement (ICE), McManus released the illegal aliens to Catholic Charities, and additionally refused to fully investigate the incident under the State of Texas smuggling statute.  [SAPD Responds After Department Releases Immigrants In Trafficking Case, by Priya Sridhar, KENS 5, January 4, 2018]I advised criminal prosecution of McManus for alien smuggling, Title 8 United States Code, Section 1324, Bringing In and Harboring Certain Aliens.

The Texas attorney general filed a lawsuit on Friday against San Antonio and other officials over the city’s sanctuary city policy, which violates state and federal immigration laws.

Attorney General Ken Paxton’s lawsuit filed in Travis County asks for an injunction, civil penalties, and fees to be imposed on the city for violating the state’s Senate Bill 4.

The lawsuit names the city of San Antonio, the city manager, Police Chief William McManus, and the San Antonio Police Department as defendants.

The Texas Legislature passed Senate Bill 4, which prohibits sanctuary city policies throughout Texas and took effect on May 3, 2017. SB 4 prohibits local entities including police departments from enforcing or endorsing policies that limit enforcement of immigration laws.

While I understand that the current Acting Attorney General is just days into his position, he was Chief of Staff for a year.  There is no excuse as to why Matthew G. Whitaker has not ordered action at a Federal level on this case.  Similarly, he should be issuing orders to his various United States Attorneys to begin prosecuting criminals like McManus, Libby Schaaf, and Kevin Vogel for aiding and abetting illegal aliens.  Whitaker needs to shake off the Sleepy Jeff Syndrome and vigorously prosecute public violations of immigration law.