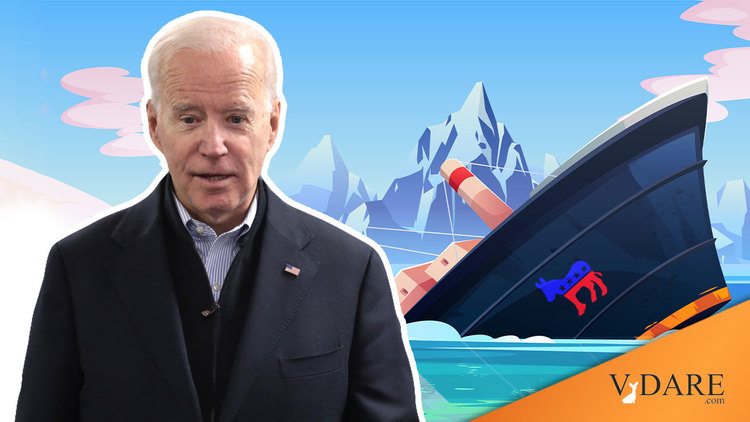 Patrick J. Buchanan: Are Democrats Looking To The Lifeboats?

Not so long ago, President Joe Biden was being talked of as a transformative president, a second Franklin D. Roosevelt in terms of the domestic agenda he would enact.

And there was substance to the claim.

Early in his presidency, Biden had passed a $1.9 trillion stimulus package. While his majorities in both houses of Congress were razor-thin, they proved sufficient to push through a $1.2 trillion infrastructure bill.

A follow-on $3.5 trillion Build Back Better social spending bill to rival New Deal and Great Society measures has broad support—though not for its sticker price—and, even today, still seems possible.

So, how are Biden and the administration he leads doing with the American people who put them into office? According to a stunning Washington Post-ABC News poll this weekend, not well, not well at all.

If the 2022 elections were held this November, registered voters would back Republican candidates over Democratic opponents 51–41.

The GOP voter advantage would translate into a rout of Speaker Nancy Pelosi's House Democrats, loss of the Senate, two years of gridlock and a lame-duck Biden presidency through 2023 and 2024.

If that Post-ABC poll is accurate, Democrats are staring into the abyss.

According to the poll, 70% of Americans have a negative view of how the economy is doing under Biden, while 38%, almost 4 in 10, believe the economy is in "poor" condition.

"About half of Americans overall and political independents blame Biden for fast-rising inflation," writes the Post, " ... with more than 6 in 10 saying he has accomplished 'not much' or 'little or nothing.'" Seven in 10 independent voters believe Biden's presidency lacks any real achievements.

Is this Biden likely to enter the history books alongside FDR?

Probably not. Only 8% of the nation thinks he has done a "great deal" in his first year, which corresponds to FDR's famous "First 100 Days" in 1933.

On how he is handling his presidency overall, Biden has the approval of 41% and the disapproval of 53% of all Americans.

Biden is 12 points underwater. While he has suffered attrition in his own Democratic Party, it is among independent voters that his losses have been staggering.

On the issues of whether the government is spending too much and whether parents should play a role in deciding what their children are taught in public schools, the GOP stance is overwhelmingly supported.

That same Sunday edition of the Post that described the Biden polls contained a lengthy political analysis of the relative strength of Vice President Kamala Harris and Transportation Secretary Pete Buttigieg as potential Democratic nominees in 2024.

The unstated premise of the piece seemed to be that Biden's first term is his last, if he makes it through to 2024.

About the plunge in support for Biden's presidency, the questions are coming fast. Can he turn this around? Is the attrition inexorable? Are we headed for a broken presidency?

To answer the questions, consider the root causes of Biden's decline.

Four of the issue areas where Biden and the Democrats are on the defensive are: inflation, immigration, crime and education.

In October, the consumer price index was 6.2% above a year ago, the highest surge in inflation in 31 years.

The family necessities of food and gasoline are showing some of the steepest price increases. Several months ago, Democrats were saying the price surge was "transitory." Few are saying that now.

The choked supply chain for commodities from abroad looks like it will take a long time to unravel. Americans are looking at a Thanksgiving with fewer turkeys and a Christmas with fewer toys.

As for the border crisis, which was put in Harris' portfolio, it is seeing the highest rates of illegal entries in decades, with more than a million having crossed our southern border since Biden took the oath. And they are still coming.

In the aftermath of the "Defund the Police!" protests and riots in the wake of George Floyd's death in Minneapolis in 2020, resignations and retirements of cops have gone hand in hand with an explosion of murders and homicides in America's major cities.

Chicago has become notorious for its weekly casualty count.

On the education issue, which now embraces the rights of parents to review what their children are being taught about race, sex and morality in their public schools—the issue probably cost Terry McAuliffe his chance to return as governor of Virginia.

And Republicans now seem in step with suburban parents as Democrats appear to be on the side of leftist teachers unions.

The returns from Virginia and New Jersey on Election Day seem to confirm what ABC and the Post found in their poll:

A tidal wave may be coming, and if it does not crest and break before November 2022, it will swamp Nancy Pelosi's House and Chuck Schumer's Senate, and it will sink Joe Biden's White House.

That's the climate change Democrats ought to be worrying about.