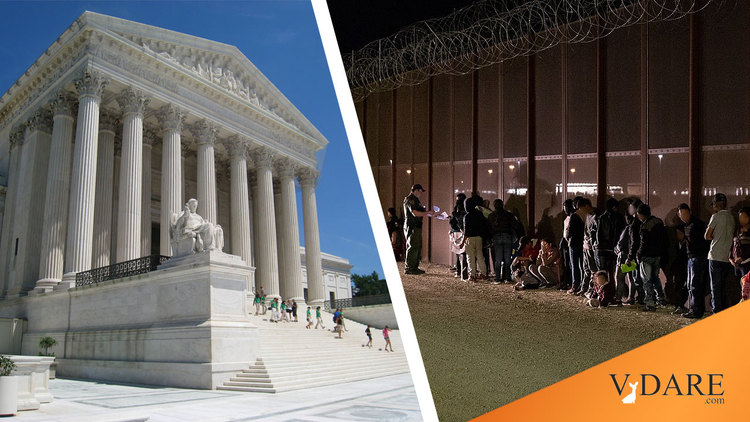 America is essentially a kritarchy, a country ruled by judges. We have elections, referendums, and all sorts of other expensive amusements, but in the end all important decisions (other than which countries to invade) are basically made by judges.

Sweeping social programs, experiments, and transformations of our entire way of life are simply imposed by judicial fiat. The legalistic cultures of the Anglosphere seem particularly vulnerable to this form of government, which seems far worse to me than the supposedly tyrannical monarchies our Founders rebelled against.

Nonetheless, every once in a while, the Supreme Court gets it right. The Biden Administration recently ended one of the Trump Administration's most impressive accomplishments, the "stay-in-Mexico" program. The point of this program is to make sure that illegals can't simply get into the country and then ignore orders to appear before a court (which is what most of them do). To quote the extremely mild Heritage Foundation:

Aliens are more likely to be ordered deported for their failure to appear than through actual court decisions on the merits of their supposed claimed right to remain in the U.S. Even in cases where aliens are ordered deported because they never showed up for court, those deportation orders are widely ignored both by those immigrants and by the Immigration and Customs Enforcement division within the Department of Homeland Security that is charged with enforcing them.

Metcalf found that almost a million deportation orders issued by federal immigration judges - 953,506 to be exact - have not been enforced by ICE. That is a 58 percent increase since 2002. Bottom line, immigrants who are here illegally believe that they can stay here illegally even when they have been ordered removed. Why? Because the federal government has in the past chosen to ignore these orders.

[No More 'Catch and Release' for Illegal Immigrants, by Hans A. von Spakovsky, Heritage Foundation, April 9, 2017]

However, the Supreme Court, in a 6-3 vote, has just put an end to the Biden Administration's scheme.

A conservative majority of the high court said in a brief order Tuesday night that the Biden administration failed to demonstrate the decision to end the program was not "arbitrary and capricious." The court's three liberal associate justices, Stephen Breyer, Sonia Sotomayor and Elena Kagan, would have allowed the administration to continue its suspension of the program.

The White House and the Justice Department declined to comment.

The Department of Homeland Security said in a statement late Tuesday that it "regrets" the Supreme Court's decision but that the department "will comply with the order in good faith." The department said it was engaging with Mexican officials about the program.

Given that this is from the Supreme Court, that would seem to be the last word. However, patriots need to keep an eye on what the Biden Administration does next in its negotiations with Mexico. We may be in the absurd position of watching our government demand that Mexico allow illegals to enter our country. It seems the leftist Mexican government does a better job defending our borders than our own rulers.