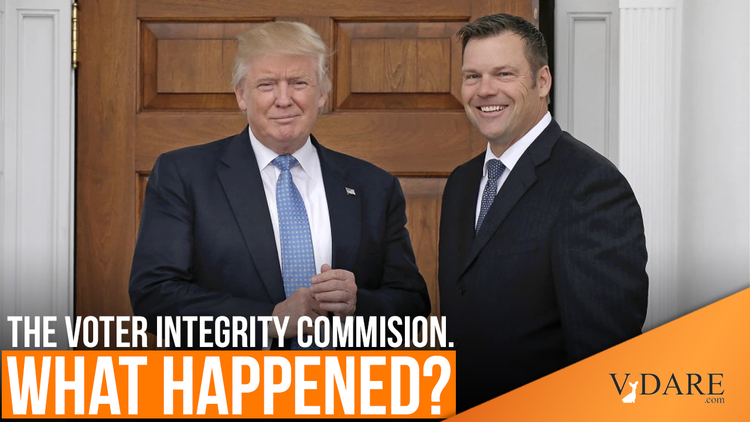 The Rise And Fall Of Trump's Voter Integrity Commission

In May 2017, President Trump created an Election Integrity Commission to help preserve American democracy, which was menaced, not by his election, but by traditional Democrat fraud and alien voters.

"A Texas election judge said that when he asked one voter to show his ID, the man whipped out his green card, signaling he was a legal immigrant but not a citizen and shouldn’t have been voting at all."

Temporary restraining orders were sought by the ACLU, the Lawyers’ Committee for Civil Rights Under Law, and others, attempting to prevent the  Presidential Commission on Election Integrity from having its first meeting in Washington, D.C.

By January 2018, the well-funded Treason Lobby, backed by compliant judges, had the Commission so bogged down in litigation, it was unable to meet. See Trump's Election Integrity Commission Prevented From Meeting Due To Litigation. Why Is Secure Voter ID So Controversial?, January 1, 2018

Despite substantial evidence of voter fraud, many states have refused to provide the Presidential Advisory Commission on Election Integrity with basic information relevant to its inquiry. Rather than engage in endless legal battles at taxpayer expense, today President Donald J. Trump signed an executive order to dissolve the Commission, and he has asked the Department of Homeland Security to review its initial findings and determine next courses of action.

I described that on Twitter as "Forget it, Jake, it's Chinatown" moment, following Steve Sailer.

Kind of a "Forget it, Jake, it's Chinatown" phenomenon. https://t.co/v0H6zLS0jW

Of course, the movie Chinatown is about evil white rich people. But the saying "Forget it, Jake, it's Chinatown"  comes from the fact that the literal Chinatown is so inscrutable and corrupt that normal white cops can't do anything about it.