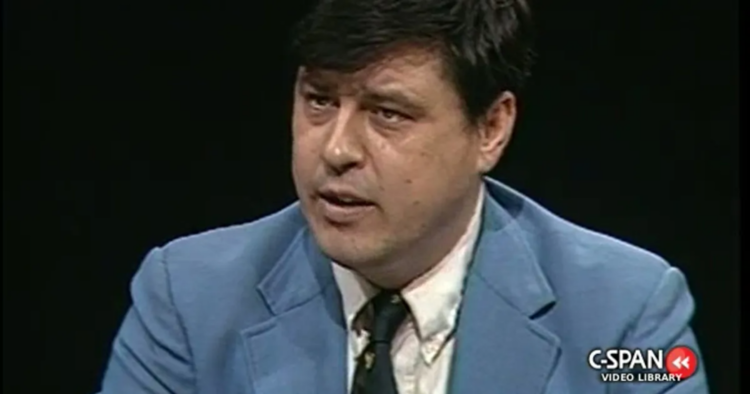 Those of us who were personally involved in the internal struggles of the American Right in the 1990s are naturally fascinated by them—but I do believe that, as Neal Freeman has noted, the corruption of National Review was a first step to the astonishing diversion of the conservative movement to the Invite The World-Invade The World heresy that occurred under the catastrophic regime of President George W, Bush. The fate of Joe Sobran, who died September 30, after a terrible struggle with diabetes, was a harbinger.

Joe Sobran proposed to me the epigraph for my 1995 book, Alien Nation: Common Sense About America's Immigration Disaster, from his celebrated knowledge of Shakespeare:

This fair child of mine

Shall sum my count

He also contributed one of its key concepts: Alienism. As he pointed out, contemporary American political language

"…abounds in words for the hostility of the native for the alien, the majority for the minority, the respectable for the marginal, white for black, Christian for Jew, and so forth. We have prejudice, bigotry, racism, anti-Semitism, nativism, xenophobia, bias, discrimination, and so forth. But these words are themselves prejudicial: They sum up, one-sidedly, a vast range of sentiment and behavior without admitting reciprocal moral realities: the hostility of Jew for Christian, black for white, marginal for respectable, minority for majority, alien for native, abnormal for normal…

"…If we can sum up the worst attitudes of one side in the term "Nativism", then we ought to have some such term, as "Alienism" (with apologies to the psychiatric profession) to sum up those of the other."

The Natives Are Restless, By Joseph Sobran, National Review, February 22, 1985

But although alienism remains the driving force in the immigration debate—and although Joe justified his resistance to Middle East wars by citing his sons who would have to fight in them, exactly as I began Alien Nation by worrying my baby boy's future in the policy-created majority-minority America of 2050—Joe never drew the obvious conclusion about immigration. Until almost the end, he remained in what a state of what theologians from his own Roman Catholic Church call "invincible ignorance" about the topic.

Of course, Larry Auster was quite wrong to say in his obituary that Joe became a "liberal Christian fundamentalist on immigration". I don't believe Joe ever went the whole hierarchical hog, or secretly entertained the delusional hope that immigrants would Catholicize America. Such people do exist, sometimes in surprising places, and Joe may have become too dependent on them after William F. Buckley destroyed his career by purging him from National Review in 1993, but I don't think he was one of them. For one thing, in 2006, the very year that he infuriated patriotic immigration reformers with his notorious remark that "I can't imagine Jesus standing on the border to turn them [illegals] back", he also announced his formal conversion: he had been "against my will, shaken and convinced" by Pat Buchanan's State of Emergency: The Third World Invasion and Conquest of America . (Auster now admits, alas with his characteristic bad grace, that he overlooked this, although, oddly, he blogged on it in 2008).

Needless to say, Joe's 2006 proclamation was irritating to me personally, because I'd been making similar arguments—as Buchanan has acknowledged, with his characteristic good grace—and in National Review, since before Joe was fired.

More seriously, I had a pretty good idea that Joe would not be joining we happy few, we band of brothers in the immigration battle—even if he had been well enough, which he was not. Like many really creative thinkers (I speak as the editor of Steve Sailer and Paul Craig Roberts), Joe was self-engrossed to the point of solipsism. He was interested in the things he was interested in, predominantly cultural rather than political—and in these he was very interested indeed: Aaron Wolfe remembers him spontaneously humming and discussing his way through all of Bach's Cello Suites

at one Chronicles dinner. But he had a distinctly Not Invented Here attitude to the things that others e.g. me were interested in.

I'd guess he simply never read my writings on immigration and never thought systematically about the issue—or even at all, until confronted by someone he really respected, namely Buchanan. (I'd also guess it helped that Buchanan was a fellow Catholic).

One of the last times I saw Joe was at a lunch I fed him in Old Town Alexandria. He arrived very late, looking awful (although he had not yet grown the beard that latterly gave him an unfortunate resemblance to Saddam Hussein) and exhausted from battling the appalling northern Virginia traffic, about which he began to complain loudly. I teased him by pointing out that sprawl is a direct result of immigration. He was taken aback, and then began to bluster.

The idea had quite obviously never occurred to him. And he didn't like it much.

Joe's mugged career was significantly parallel to that of his friend Sam Francis. But whereas Francis, in Jared Taylor's brilliant phrase, would greet you on the phone as if you were a bill collector, Joe was completely different in his warmth and dazzling charm. His voice positively undulated with empathy and his eyes twinkled with such affection that you had to remind yourself that you really didn't know each other that well. No surprise that, although in his person and lifestyle an extreme Bohemian, as Taylor has delicately chronicled, Joe married twice and attracted the interest of beautiful women (ardently reciprocated) to the end of his life.

On the other hand, I was far from alone in finding him irritating. "Joe's first wife went mad and tried to kill him with a shovel," Linda Bridges once told me when we working together at National Review—ironically, I think on my 1992 immigration cover story or perhaps on the responding symposium. She went on: "Now that in itself, if you were married to Joe Sobran, would not be evidence of insanity. But she really was mad."

At that point, Joe was coming up to New York from Princeton, New Jersey, and camping overnight in his office. It resembled a bear's lair, with a sleeping hollow distinctly visible amid the accumulated books, papers and goodness only knows what else. Visitors to National Review would be taken to view it, as a sort of natural wonder.

Another entity that Joe succeeded in irritating was the Internal Revenue Service. This must have been quite difficult to do, because no-one at National Review made much money (apart from Buckley, whose plutocratic life style the magazine subsidized to a scandalous degree). Yet the IRS's garnishing of Joe's salary became so extreme that he was literally destitute and Buckley directed National Review's publisher, Ed Capano, to pay him in cash—exposing Ed to significant legal risk.

This and other aspects of Joe's life must raise the question of the extent to which men make their own luck. Infuriating his natural allies in the patriotic immigration reform movement is only one example. I was very far from the only editor to find he would not take direction, or meet deadlines. This was a problem even when he was writing for his own newsletter (to which, I am proud to say, I subscribed from start to finish). You don't go far into Sobran lore without finding atrocity stories, like that of the welcoming committee, from a conference at which he was to be paid to speak, discovering he was not on the flight that they had booked for him and in fact wasn't coming at all—because he had decided he didn't feel like coming, and just hadn't bothered to let them know.

But no conceivable personal failings could have had the same impact on Joe's career as the relentless and significantly unreported way in which he was pursued by the Furies of Political Correctness, especially after Buckley had betrayed him. No doubt the younger conservative writers who (bravely if unwisely) have memorialized him with the usual pious qualifications (see here and here) have no idea of its ruthless vindictiveness. Just a couple of years ago, I found myself talking to the supporter of a small Midwestern foundation who was astonished at the orchestrated pressure, on officers, media and donors, that had forced his group to renege on an invitation to Sobran to speak on a completely innocuous topic.

Joe himself told me, with unusual bitterness, that he thought the people who had wrecked his career had themselves to blame for where he was able to speak. VDARE.COM has suffered from this kind of affinity group Stalinism. I sympathize.

What exactly was Joe Sobran's great offense against political correctness? Here (disagreeing with Chronicles Scott Richert) I appeal to the authority of the New York Times' obituarist William Grimes:

"He took a skeptical line on the Holocaust and said the Sept. 11 terror attacks were a result of American foreign policy in the Middle East, which he believed that a Jewish lobby directed. Not surprisingly, he spent much of his time defending himself against charges of anti-Semitism.

"'Nobody has ever accused me of the slightest personal indecency to a Jew,' he said in a speech delivered at a 2002 conference of the Institute for Historical Review. 'My chief offense, it appears, has been to insist that the state of Israel has been a costly and treacherous '"ally" to the United States. As of last Sept. 11, I should think that is undeniable. But I have yet to receive a single apology for having been correct.' "

(Hyperlinks in original). I think this is a fair summary—which will do Grimes's career no good. Indeed, Deborah Lipstadt issued an encyclical letter of complaint (October 4, 2010): "I am unsure what it means to be 'skeptical' about an established historical event." (The answer, presumably, is that you question its provenance, details and implications—as with every other non-sacrementalized historical event.)

None of this, of course, is VDARE.COM territory. But I am obliged to note that Joe's firing from NR did not occur, as so many accounts seem to think, because he challenged neoconservativism, but because he exposed  Buckley's private contempt for his Irish Catholic supporters ("You don't need those people"). That, shamefully, is what triggered Buckley's always-imperative ego.

The conventional conclusion here would be to cite the ringing rhetoric of the Christian church. But, instead, I draw on Joe's beloved Shakespeare, deliberately and hopefully truncated: