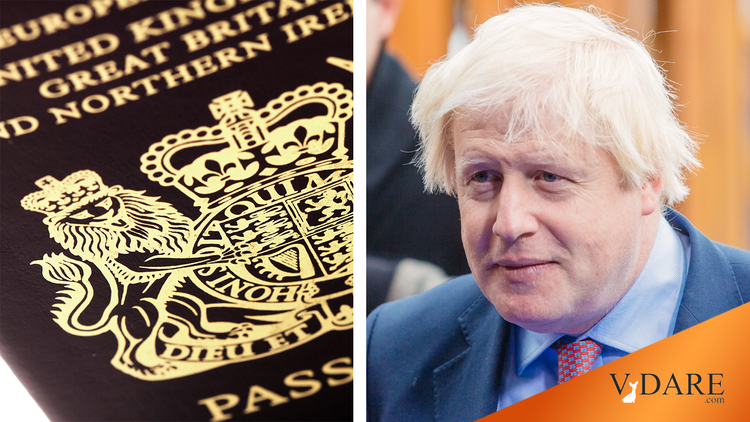 There’s A Word For Boris Johnson’s Proposal To Swamp U.K. With Chinese: TREASON

Robert Henderson
A+
|
a-

British Prime Minister Boris Johnson recently announced that Hong Kongers eligible for a British National (Overseas) [BNO] passport—i.e. anyone born before 1997, when China took over Hong Kong—will soon be able to enter Britain without a visa if China officially implements its recently-passed Hong Kong security Law. They will have the right to live and work in the U.K. for five years, despite the current six-month limit, and apply for U.K. citizenship 12 months after that [UK extends immigration rights for 3M eligible Hong Kongers, by Sylvia Hui, AP, July 1, 2020]. In other words, Britons already afflicted by “Asian” grooming gangs and other Third World immigrants must now prepare for the possibility that millions of Hong Kongers will rush in. There is a word for what Johnson is doing: treason.

Changing the terms on which BNO holders are allowed into the UK would require legislation. But it’s wildly improbable that Parliament would block such a change. Johnson has a large majority, and the opposition parties would never vote against Electing A New People.

Johnson’s rash vow has met with precious little condemnation from the British Main Stream Media and politicians, which tells you how strong a grip Political Correctness has on British elites.

Even Nigel “Mr. Brexit” Farage has confined himself to quibbling about numbers:

Well Boris also, twice as mayor of London, suggested mass amnesties for hundreds of thousands of illegal immigrants who come to Britain. So when it comes to immigration, Boris is not very conservative at all. On Hong Kong: look, there are many, many, many extremely well-educated, extremely talented people living in Hong Kong, many of whom have a great respect for the United Kingdom. But the thought we can open the doors to three million is just literally impossible. Could we allow, if the situation gets worse, could we allow a fair number of Hong Kongers to come to Britain? Yes, we could. Three million? Just not possible.

[Nigel Farage: Trump is taking us back to more traditional alliances, by Amber Athey, Spectator, June 25, 2020]

So what’s a “fair number?” A quarter-million? A half-million? 1.5 million?

Farage correctly said Johnson is not a conservative. What exactly Johnson is remains a matter of debate, but a liberal internationalist would not be a million miles away from the truth. Johnson has always been soft on immigration, as his spell as Mayor of London illustrates. He frequently referred to his Turkish great-grandfather to establish his multi-cult street-cred [Boris Johnson has a Muslim great-grandfather from Turkey – here’s who he was, by Alex Nelson, Independent, June 24, 2019]. But the real key to Johnson: his monstrous ego. He desperately wanted to be Prime Minister. He would have been quite comfortable in the Blairite Labour Party if that were the fastest route to 10 Downing.

Johnson himself has estimated the number of possible immigrants from Hong Kong at three million [Boris Johnson on the Hong Kong crisis: We will meet our obligations, not walk away, by Boris Johnson, The Times, June 3 2020].

And three million is not the worst case. If China treats Hong Kongers really badly, any UK government would certainly permit the immigration of multitudes who are not technically qualified. Conservative Prime Minister Edward Heath  (the man who fired Enoch Powell from his Shadow Cabinet) set that precedent a half century ago when he permitted 50,000 Ugandan Asians to settle in Great Britain after Idi Amin threatened them [The Ugandan Asians never forget their debt to Britain, by Dolar Popat, Evening Standard, August 15, 2019].

To put the three million in perspective, consider this: Net immigration to the UK in 2019 was 270,000. Johnson’s promise of 3 million Hong Kongers, 4.5 percent of Britain’s population, boosts that number 1,011 percent. That’s the equivalent of the U.S. admitting 14.8 million people.

Does Johnson believe the UK can deal with such an influx? I doubt it. More probably, he’s gambling that China will stop them, or that Hong Kongers will stick it out despite China’s attack on their freedoms, as VDARE’s John Derbyshire has suggested. Many might go elsewhere, perhaps to Canada or Australia [Countries Are Opening Their Doors for Hong Kong’s Exodus, by Salvatore Babones, Foreign Policy, July 8, 2020]. Above all, they might also go elsewhere in Asia, especially to Taiwan, which has expressed its willingness to accept them and is their No. 1 choice [Taiwan offers refuge to fleeing Hong Kong citizens, by Jasmine Leung and Nicola Smith, The Telegraph, July 4, 2020].

But even only one million Hong Kong immigrants would burden Britain and its people materially and psychologically. Real Britons would be betrayed—again.

China has made known its desire to dominate the world as clearly as Hitler made his ambitions known in Mein Kampf. It is undoubtedly serious about swallowing Hong Kong sooner rather than later, which most certainly would mean brutal repression and Hong Kongers’ dash for other countries, not least Britain for those with BNOs.

Which also means Britain might wind up with large numbers of criminals and the mentally disabled if the Chinese want to be really cheeky and copy Fidel Castro’s Mariel Boatlift of 1980, when he emptied Cuba’s prisons and hospitals and sent the inmates and patients to the U.S.

And that raises another point. Mass immigration should be judged by its effects, not by the good intentions of the politicians who permit it. Third World immigrants have colonized large areas of virtually every major Western city. As the numbers of immigrants and their descendants increase, the native population becomes more and more dissatisfied even as politicians intensify propaganda about the joys of diversity and pass laws criminalizing dissent. This puts the immigrants and their spawn in a de facto privileged position. Recall Enoch Powell’s worried constituent: “In this country in fifteen or twenty years’ time the black man will have the whip hand over the white man.” That is now true in Great Britain [Miss Swimsuit UK, 23, is stripped of title over 'All Lives Matter' Facebook post—as it emerges her actor boyfriend shared anti-BLM meme stating 'white privilege is a leftist lie,' Daily Mail, July  17,  2020].

Most contemptible, the elite British who not only allow but also welcome immigration are under no illusion about the state of heavily immigrant areas. They generally take great pains to live as far away as possible from the diversity they praise. They bleat constantly about the wonders of diversity even as they take flight to very white, very English places. Left behind is the white working class. London is a prime example.

Bottom line: Mass immigration should be viewed as a form of theft. It robs the native population because it creates competition for housing, healthcare, education, jobs, and most importantly, the right of a people to enjoy their country without having to worry about their culture being diluted or even ultimately overthrown.

VDARE.com readers need no reminding that racial differences are real. Tribes, nations, and borders suggest the strong human instinct to organize along racial and ethnic lines, find mates within the same race, and at the same time erect cultural if not legal barriers not only to miscegenation but also even intermarriage with people of the same race but of different ethnicity or religion.

The Politically Correct insist that humans are basically the same, but the reality is that heterogeneous societies are invariably fractious; i.e., lacking trust. Homogeneous societies are not immune to discord, but that discord rarely reaches the same all-pervading level. Disputes can be more easily settled. Class inequalities can be ameliorated, the balance between state and private enterprise changed, tyrants overthrown.

But in heterogeneous societies, in which myriad groups compete with each other, such progress is impossible because tribal or racial blood will tell. The tribe, or race, will always come first—particularly in competing for political or police power.

Conclusion: If British politicians conspired with a foreign power to allow huge numbers of foreigners to invade, we would call it treason.

If dissent about such an invasion was suppressed, we would call it treason.

If a foreign power invaded, Britons could fight without inviting global opprobrium.

Not so with mass immigration. And that is why, as VDARE.com Editor Peter Brimelow argued more than 20 years ago and I have argued elsewhere [What is treason today?, November 15, 2015], permitting mass immigration is the most fundamental form of treason.

Robert Henderson [Email him] is a retired civil servant living in London and consequently old enough to remember what life was like before political correctness. He runs the Living In A Madhouse and England Calling blogs.