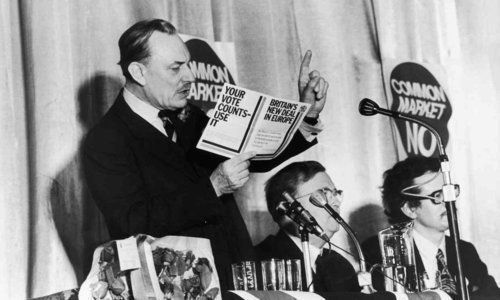 In April 1968, only days after Dr. King had been assassinated and riots had erupted in 100 American cities, there arose in England to raise the alarm on the explosive issue of immigration from the Third World a hero of the war and scholar of the classics, the Tory shadow minister of state for defense, Enoch Powell.

"The supreme function of statesmanship," Powell began, "is to provide against preventable evils. ... The discussion of future grave but, with effort now, avoidable evils is the most unpopular and at the same time the most necessary occupation for the politician."

"Only resolute and urgent action," said Powell, could avert the "horror" unfolding on the far side of the Atlantic. As he spoke, the immigrant flow into Britain from the Commonwealth nations of Africa, Asia and the Caribbean was 50,000 a year, a trickle compared to the 1.2 million legal and illegal aliens who have been entering the United States every year for a generation.

Powell warned that if stern action were not taken to stem the tide, by 2000, 5 million to 7 million Third World people would be there.

"It is like watching a nation busily engaged in heaping up its own funeral pyre," Powell thundered. Then he spoke the words that ended his brilliant career: [ Peter Brimelow says: NO NO NO!] "As I look ahead, I am filled with foreboding; like the Roman, I seem to see 'the River Tiber foaming with much blood.'"

Powell was instantly gone from the shadow cabinet, dropped by Edward Heath for what that future prime minister called a speech "racialist in tone, and liable to exacerbate racial tensions."

Raspail described a "Last Chance Armada" of a million diseased and destitute from the hellholes of Calcutta who embark aboard a fleet of leaky and decrepit ships and steer round the Cape of Good Hope to Europe – to be taken in, or die. As the armada enters the Mediterranean and reaches the Riviera, the French government, awash in humanitarian liberalism, refuses to repel the invaders and invites them in. Around the world, the wretched of the earth watch the television reports, and wait. When the Last Chance Armada triumphs, its passengers emerge in an orgy of looting, rape and pillage to overrun the fat rich lands of the West, "the Camp of the Saints."

Though many reviewers were repelled, the novel was a smashing success, with some comparing Raspail's work to Camus' The Plague and Swift's Gulliver's Travels. "One of the most chilling books of this generation," wrote James J. Kilpatrick. "Our children and grandchildren may soon discover that Jean Raspail wrote not fiction, but fact."

In 2004, Raspail surfaced in Le Figaro to accuse the French elite of treason. " La Patrie Trahie par la Republique," the title of his essay, translates, "The Fatherland Betrayed by the Republic."

By "the Republic," Raspail meant not just the Fifth Republic of Mitterand and Chirac, but France's ideology of inclusiveness rooted in the Revolution's ideology of "liberte, egalite, fraternite." Alluding to the waves of immigrants from Africa, the Middle East, the Caribbean and Asia, Raspail grimly asserted: "The deed is done. ... All of Europe marches to its death."

"No amount of atomic bombs will be able to dam up the tidal wave comprising human beings in their millions which one day will leave the southernmost and poor part of the world, to swamp the relatively open spaces of the wealthy Northern Hemisphere, in search of survival."

Europe denounced and dismissed both men as racists. Now we learn that 19 of those captured plotting to blow up 10 airliners over the Atlantic were British-born Pakistanis. The suicide bombers of the London subway were British-born Asians. Richard Reid's father was Jamaican. Alienated, he was drawn to an ultra-radical mosque before attempting mass murder over the Atlantic.

Race riots have since plagued the industrial cities of Northern England. In France last summer, thousands of French citizens of North African descent rioted and pillaged in the banlieus of Paris and 300 other cities, until President Chirac, after 12 days, finally declared a national emergency. Zacarias Moussaoui, the "20th hijacker," was a French citizen. The Madrid bombers were immigrants or the children of immigrants, as was the daylight murderer of Dutch filmmaker Theo van Gogh.

No, Mr. President, they hate us.

Powell and Raspail were ostracized for what they said and wrote. Their stories are related in my new book, State of Emergency: The Third World Invasion and Conquest of America. Time to revisit the question: Were these men false prophets rightly reviled—or prophets without honor in their own countries?

Patrick J. Buchanan needs no introduction to VDARE.COM readers; his new book State of Emergency: The Third World Invasion and Conquest of America, can be ordered from Amazon.com.

Enoch PowellCamp Of The Saints
<< Previous
Next >>
LATEST