Supporters of the nation-state form of government in Britain are happy citizens today, now that the Brexit divorce from the European Union has been made official. It’s been a long time coming since 2016 when the referendum passed, because globalist elites resisted stubbornly. The rich and powerful prefer the distance from troublesome voters that an EU-style bureaucracy provides.

But the best organizational system for representative government is the nation state.

That has been the opinion of Vaclav Klaus, the former leader of the Czech Republic, who remarked in 2018, “For me, the Nation-State is the only possible way to have democracy. Democracy simply cannot exist at a higher level, as in continents, let alone global democracy in the world.” 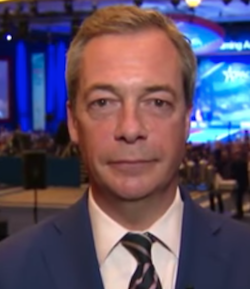 The British leader for Brexit, Nigel Farage (pictured at right), agrees. He discussed the issue with Tucker Carlson in 2017: Nigel Farage Cheers Rebirth of Nation State. Here’s a relevant excerpt:

FARAGE: Well you say “nationalism,” I actually call it “nation-ism” — we believe in the nation state. That is the unit we identify with; that is what we feel part of; that is what we cheer for in the Olympics; and if necessary that is what we are prepared to fight for. It embodies our values, our families, our communities, our heritage, our identity, maybe even our tribe. And I think what happened in 2016 with Brexit and with Trump, and I believe is going to roll out through 2017, is a return to normality.

Back to the present, an upbeat Farage has been doing media interviews, including one with Lou Dobbs who observed that the United Kingdom is “finally a sovereign nation once again.”

Farage is hopeful that getting Brexit pushed through will inspire more successful populist campaigns in the near future:

FARAGE: It’s a funny thing, in 2016 we had the Brexit referendum; we voted to leave — it shocked everybody. And then a few months later, guess what happened — Donald J. Trump got elected as president of the USA, and after that we saw shockwaves in Italy and elsewhere, and I think now the confirmation that Brexit has happened shows you that populism — and it may be mocked and derided by many — but populism is really popular, and I think the portents for Donald Trump’s re-election are really good.

In fact I think the whole western world is going through a transformative historical change and Brexit perhaps is the most public example of that, and I’m really excited by that because what the globalists want to do — big business, big politics, big bureaucracy — is take away our democratic rights, and this is the people’s fight back.