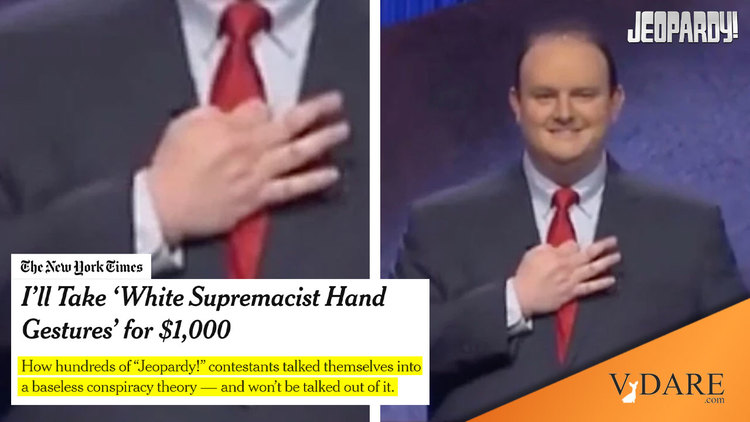 NYT Mocks JEOPARDY Contestants For Imagining "White Supremacy"—NYT Has Been Doing Just That To VDARE.com For Years

Earlier, by Peter Brimelow: The Sin Of SULLIVAN: Why Donald Trump, Tulsi Gabbard and I Are Suing For Libel

Steve Sailer wrote about the Jeopardy brouhaha, in which a three-time winner held up three fingers and was believed to be making a "White Supremacist" hand gesture:

the United States is undergoing a revival of superstition and witch-hunting in the name of Anti-Racism. Millions of modern Americans are deeply concerned that a vast secret coterie of White Supremacist Terrorists are signaling to each other on your favorite TV shows.

The funniest part of this is the Jeopardy contestants denouncing the falsely accused "white supremacist" for a *second time* after he failed to apologize for making a hand gesture that had already been established to not connote white supremacy https://t.co/sGHyfKnA56

I think it's funny that the New York Times is mocking them for it:

So the element of this story that interests me most is how the beating heart of nerdy, liberal fact-mastery can pump blood into wild social media conspiracy, and send all these smart people down the sort of rabbit hole that leads other groups of Americans to believe that children are being transported inside refrigerators. And, I wanted to know, how they could remain committed to that point of view in the absence of any solid evidence.

How hundreds of “Jeopardy!” contestants talked themselves into a baseless conspiracy theory — and won’t be talked out of it.
By Ben Smith
May 16, 2021

The New York Times , after all, is the same newspaper that reported as straight news the "Kritarchy is anti-Semitic term" email brouhaha in 2019, in which, briefly, a news roundup mailed to the immigration "judges" of the EOIR (they're not really judges, they're Executive Branch employees, with a union) included a news item from VDARE.com, which is, in fact a news organization.

Some ignoramus, probably the Iranian-American Tabaddor, decided that since the Wikipedia article on "Kritarchy" described the system used in Israel  at the time of the Book of Judges as a kritarchy, that made it anti-semitic, even though lots of places of have been ruled by kritarchies, and it's a Greek word like anarchy, monarchy, oligarchy, etc.:

The original NYT article that said this was

And recently, in spite of the fact that we have (a) explained this at length, and (b) are suing them for libel over this and other slurs, the New York Times editorial board said it again:

A thornier problem is how to stamp out the hard-line anti-immigrant culture that spread throughout the Justice Department under Mr. Trump, Mr. Sessions and the former president’s top immigration adviser, Stephen Miller. For instance, a 2019 department newsletter sent to immigration judges included an anti-Semitic reference and a link to VDare, an anti-immigrant group that regularly publishes white nationalists.

That link above goes to their "Extremist Blog Post" story which includes our rebuttal of the idea that "Kritarch" is anti-Semitic...and the fact that the newsletter that linked to us—as a news source printing facts the NYT doesn't consider fit to print—didn't come from inside the Justice Department, but was a contractor, hired to provide immigration news, and apparently not ordered to censor it.

So how different, really, is the Editorial Board of the New York Times from the people who believe that "children are being transported inside refrigerators" or think that a white man who holds up three fingers is signalling to the vast white-wing conspiracy?

Go here if you want to contribute to our Legal Defense Fund.