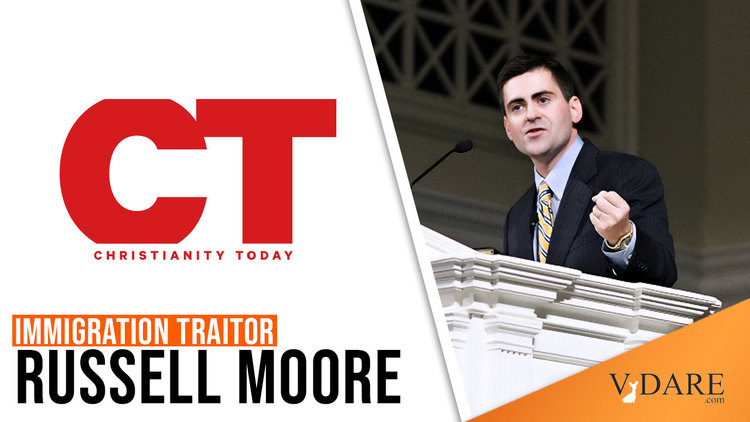 My latest VDARE.COM article, above, was about Russell Moore, president of  the Ethics and Religious Liberty Commission (ERLC) of the Southern Baptist Convention, teaming up with former president George "Dubya" Bush to promote more mass immigration.

Here's how the article ended:

A simple solution: Abolish the ERLC and dump Russell Moore. The real strength of SBC lies in local congregations, not the elitist central bureaucracy hijacked by the likes of Moore.

Little did I know, but when that article was posted on VDARE.COM in the wee hours of May 19, Russell Moore had already announced (sometime the previous day) that he was leaving the ERLC to work for Christianity Today magazine.

Sorry I missed that, there's just so much going on!

On May 18, Moore had announced, on his own website

I am excited today to accept the invitation from Christianity Today to join their team as public theologian and as director of a new venture, the Christianity Today Public Theology Project, which is devoted to cultivating a forward-looking, joyful, consistent gospel witness.

I’ve struggled with this decision, because my gratitude for the honor of serving the Ethics & Religious Liberty Commission is so deep. As I conclude my time serving Southern Baptists as ERLC president, I am filled with gratitude as well as excitement for the future. [Onward. russellmoore.com]

Here's what the Washington Post (for whom Moore has written) had to say about it:

Prominent Southern Baptist leader Russell Moore, who blasted former president Donald Trump and his evangelical fans, announced Tuesday [May 18] that he will be leaving the leadership of the Southern Baptist Convention where he has been the president of its policy arm since 2013.

Moore’s departure from the convention’s Ethics & Religious Liberty Commission (ERLC) follows other high-profile exits from the denomination, including popular Bible teacher Beth Moore (no relation) and Black pastors. Some evangelicals are wondering what their departures signal about the direction of the convention, which has included louder voices on the far right in recent years.

Russell Moore will be joining the staff of Christianity Today, the evangelical magazine founded by the late evangelist Billy Graham, where he will write content and help launch a “Public Theology Project,” hosting events and gatherings about theology [Russell Moore’s departure from the Southern Baptist Convention’s leadership prompts questions over its future, by Sarah Pulliam Bailey and Michelle Boorstein, Washington Post, May 19, 2021].

Later in the article it says that

Three people, who spoke on the condition of anonymity to avoid jeopardizing their jobs, said Russell Moore was ultimately not a good political insider within the SBC and preferred to steer his own ship at the ERLC. One observer who works for a Southern Baptist organization said he did not connect well with grass-roots Baptists.

Reformation Charlotte, another non-woke evangelical website, ran a May 19 article entitled Russell Moore’s Departure From the SBC Will Not Save the Denomination.

Russell Moore’s tentacles of woke influence in the Southern Baptist Convention have reached far and wide. Every institution, every seminary, nearly every church, has been influenced by the movement Moore started, a sleeping giant that Moore awakened, a beast that now lives in pastors, professors, and leadership. So much damage has been done that it will be an uphill battle, if not impossible, to undo all of it.

The article likened Moore's influence to a cancer.

So, sure, while it’s nice to have the main tumor eradicated, if Southern Baptists hope to save the denomination and its institutions, they better hope the chemotherapy works.

SBC watchers should keep an eye on the denomination's  annual meeting next month where Critical Race Theory looks to be an issue.